Association of Biochemical and Histological Features with Parafibromin, Galectin-3, and PGP9.5 in Parathyroid Neoplasms

Conflict of interest: None declared

Parathyroid carcinoma is a rare neoplasm accounting for 0.1–5% of all parathyroid neoplasms in patients with primary hyperparathyroidism and shows higher frequency in Asians than in Westerners.1–6 The clinical signs and symptoms of benign and malignant parathyroid lesions show a significant overlap in the form of marked hypercalcemia and high serum parathyroid hormone levels, and definitive diagnosis of malignancy is based on histological criteria. Absolute diagnosis of parathyroid carcinoma requires documentation of distant or lymph node metastasis; however, malignant potential in parathyroid neoplasms can be predicted based on certain histological features in postoperative specimens as given by Bondeson and Chan et al. Some of these features in the histological criteria are considered absolute for diagnosing carcinoma where even one feature is sufficient to label a parathyroid neoplasm as carcinoma whereas others are minor features where a minimum number of four features are required to predict malignancy.1,7–9

There is evidence that though certain histological features have been used to predict malignant behavior in parathyroid neoplasms, these features have not shown consistency with the aggressive biological behavior of malignant neoplasms, as a proportion of histologically benign parathyroid tumors show recurrence or metastasis and histologically malignant tumors behave in a benign fashion without long-term recurrence or metastasis.10–12 Subsequently, a number of immunohistochemical (IHC) markers either alone or as a panel have been studied to substantiate the histological criteria for predicting the risk of aggressive tumor behavior. These include parafibromin (PF), Gal-3, PGP9.5, APC, Ki-67, cyclin D1, p53, Rb, p27, and fragile histidine triad.13–17

PF is a member of the Paf1 complex and inhibits cell growth by causing cell-cycle arrest at the G1 phase partly due to the downregulation of cyclin D1 and histone modification. PF is expressed in various normal tissues including the parathyroid gland, adrenal gland, kidneys, pancreas, heart, and skeletal muscle. Complete or partial loss of PF expression has been observed in hyperparathyroidism-jaw tumor (HPT-JT) syndrome and parathyroid, breast, lung, gastric, and colorectal cancers. PF expression has been related to tumor size, pathological stage, and lymphovascular invasion in breast, colorectal, and gastric cancers.18–21 Gal-3 is the only member of the galectin family having an antiapoptotic effect which has a role in several biological functions including tumor cell adhesion, proliferation, differentiation, angiogenesis, cancer progression, and metastasis. It is expressed in thyroid, colorectal, breast, gastric, and liver cancers; brain tumors; large cell lymphoma; and melanoma.19–24 PGP9.5 is a neuron-specific protein, having opposing biological functions, acting both as ubiquitin carboxyl-terminal hydrolase and ligase. It was normally thought to be expressed in neuroendocrine and neural cells; however, it has been expressed in a variety of other normal tissues including mammary epithelial cells, melanocytes, distal renal tubular epithelium, fibroblasts, and germ cells. PGP9.5 has been associated with the progression of the disease stage in lung, colorectal, pancreatic, and mesenchymal tumors.25–29 Tokumaru et al. showed that inactivation of PGP9.5 via promoter hypermethylation or gene deletion was significantly related to head and neck squamous cell carcinoma and pancreatic carcinoma, suggesting its tumor suppressor action.25 Its overexpression is known to be strongly associated with parathyroid carcinoma and HPT-JT-related tumors.12

The sensitivity and specificity of PF, Gal-3, APC, and PGP9.5 for parathyroid carcinoma have been reported to be high, though it is variable in different studies.12,13,19,22,30–37 The fact is that the sensitivity and specificity of these IHC markers in parathyroid neoplasms have been assessed with respect to the histological criteria1–7,9 for diagnosing benign and malignant tumors which itself does not accurately predict the biological behavior of parathyroid carcinoma.10,11 Whether these IHC markers have any direct association with worrisome histological feature required for diagnosing malignancy is not clearly known, neither has it been well evaluated. Therefore, this study was planned to find out if there is any direct association of PF loss or overexpression of Gal-3 and PGP9.5 with the individual biochemical and histological features in parathyroid neoplasms and whether any feature can independently predict the expression of an individual or a combination of IHC markers.

All consecutive parathyroidectomy specimens received in the Department of Pathology at a tertiary care referral center from January 1993 to December 2013 within a period of 21 years were retrieved and clinical, biochemical, and gross findings were recorded from hospital records and case files. All cases were reviewed histologically according to the criteria given by Chan et al. and DeLellis et al. as shown in Table 1.1,7–9 The cases were categorized into five diagnostic categories—carcinoma, atypical adenoma, adenoma including lipoadenoma, double adenoma, and hyperplasia. The diagnosis of carcinoma or atypical adenoma was done according to the criteria mentioned in Table 1.

IHC was performed for PF, APC, Gal-3, PGP9.5, and Ki-67. Mouse monoclonal antibodies were used for PF (clone—2H1) and Gal-3 (clone—B2C10) from Santa Cruz at a dilution of 1:20 and 1:50, respectively. Rabbit monoclonal antibody was used for APC (clone—EP701Y, Abcam), whereas rabbit polyclonal antibody was used for PGP9.5 (DAKO) at a dilution of 1:50 each. Ki-67 was used (DAKO, clone-MIB1) at 1:50 dilution. Antigen retrieval for PF, APC, Gal-3, and Ki-67 was done in citrate buffer (pH 6.0) and for PGP9.5 in Tris EDTA (pH 9.0). Primary antibodies were incubated for 1 hour at room temperature followed by secondary antibody (Ultra Vision Quanto Detection System—Thermo Scientific) for 30 minutes. The cutoff for positive expression of different antibodies was based on different studies in the literature.12,18,19

For all antibodies, the intensity was graded as mild, moderate, and severe based on the subjective assessment. IHC results were then correlated with biochemical features, tumor weight, and histological features.

The data were analyzed using statistical package for social sciences (SPSS) software version 20.0. Categorical variables were analyzed by Chi-square (univariate) and binary logistic regression (multivariate) tests. The Fischer exact test was applied to assess the level of significance, wherever the values were 5 or less. A p value of <0.05 was considered as statistically significant.

A total of 246 parathyroid resections were received within a period of 21 years. Neoplastic lesions accounted for 227 cases comprising of 194 adenomas including three cases of lipoadenomas, 19 atypical adenomas, and 14 carcinomas. Nineteen cases having involvement of more than one gland (3 cases of double adenoma and 16 cases of hyperplasia) were excluded from the final analysis. Thus, 227 parathyroid neoplasms were included for further workup. Carcinoma showed a higher mean age of 47.4 years (range 30–66 years, median 51.0 years). Atypical adenoma and adenoma had nearly similar age of presentation with a mean of 40.7 years (17–76 years, median 40.0 years) and 41.6 years (12–76 years, median 41.0 years), respectively. The male-to-female ratio was 1.8:1 for carcinoma, 0.9:1 for atypical adenoma, and 0.4:1 for adenoma. 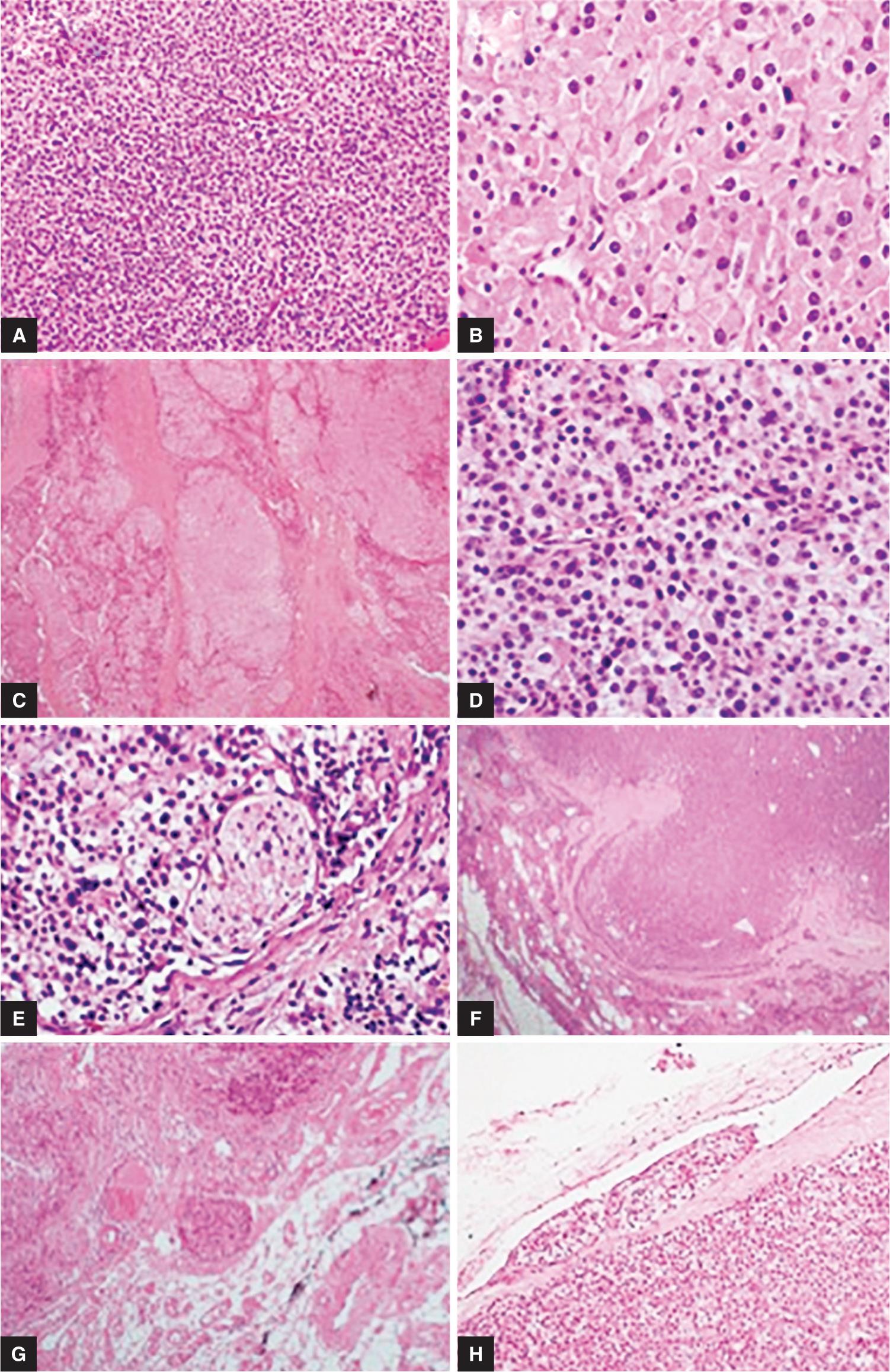 Coagulative tumor necrosis, a feature associated with malignancy, was present only in two cases of atypical adenoma and one case of carcinoma. One case of carcinoma with necrosis showed PF loss and PGP9.5 overexpression. Two cases of atypical adenoma showed Gal-3 overexpression. These findings were indicative of necrosis being a worrisome feature expressing IHC markers of the malignant phenotype. 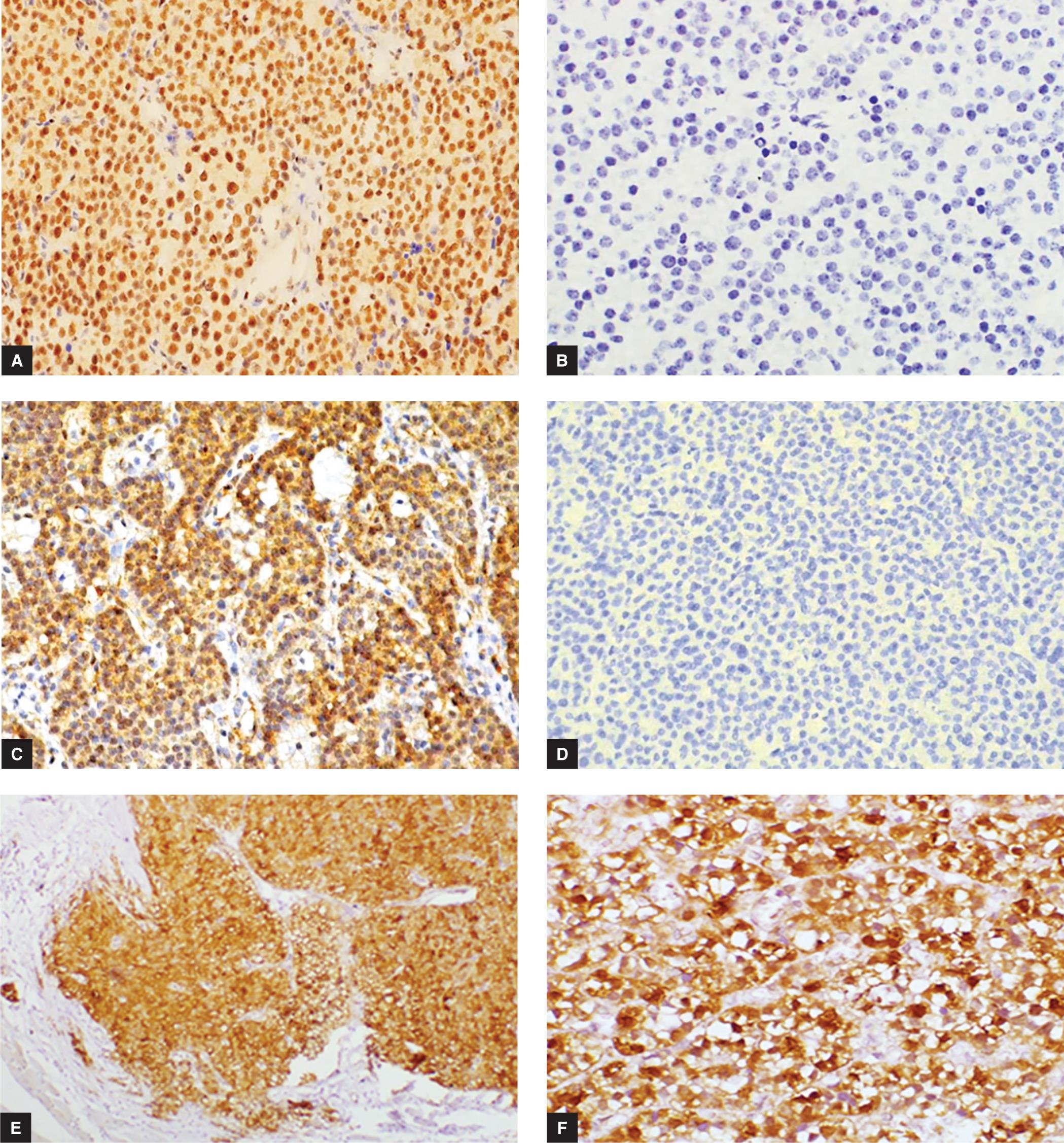 We could not find any literature evaluating the direct association of these IHC markers with clinicopathological features in parathyroid neoplasms. In the present study, IHC expression or loss was correlated with clinicopathological features that showed the presence of certain biochemical (hypercalcemic crisis and raised serum ALP) and histological (sheet-like pattern, predominance of oncocytic cell type (using both >75% and >90% cutoff criteria), capsular invasion, and adjacent tissue invasion) features were independently associated with either one or combination of antibodies. The oncocytic histology in four cases of histological adenoma and three cases of atypical adenoma showed complete PF loss and overexpression of Gal-3 and PGP9.5 in 60–100% of tumor cells which again raises concern over their malignant potential. Moreover, it is believed that histologically benign or atypical parathyroid neoplasms with loss of PF should be considered as parathyroid neoplasms of low malignant potential, whereas intact PF staining in malignant parathyroid neoplasms indicates low malignant potential.39–41 Some of the previously mentioned features are included in the histological criteria for diagnosing risk of malignancy as given by Chan et al., DeLellis et al., and Bondeson et al., such as capsular, vascular, and adjacent tissue invasion; thick fibrous bands; diffuse macronucleoli and diffuse sheet like pattern; however, clinical or biochemical features are not a part of histological criteria.1,7–9 Observations of the present study indicate that predictive accuracy of the above diagnostic criteria can be enhanced by the inclusion of certain biochemical and histological features like hypercalcemic crisis, and predominant oncocytic cell type, as these features also positively correlate with IHC markers for parathyroid carcinoma. The importance of predominantly oncocytic histology can be affirmed by the fact that 7 of the 14 carcinomas in the present study were composed predominantly of oncocytic histology. This feature was significantly associated with carcinoma and also with Gal-3 and PGP9.5 expression irrespective of histological diagnosis. We tried to find out any difference in the association of these IHC markers between oncocytic adenoma and carcinoma and found that the oncocytic carcinomas showed significant association (p value = 0.002) with all the three markers, both singly and in combination, compared to adenoma. However, the oncocytic histology also showed significant association with PGP9.5 overexpression in adenomas. Published studies have shown that oncocytic tumors tend to be non-functional and, hence, are mostly diagnosed at a later stage with larger tumor size and higher tumor weight. In the present study, four cases of oncocytic parathyroid carcinoma using >75% cutoff were functional with raised PTH levels and hypercalcemic crisis was noted in two of these. In the remaining three cases, PTH levels were not available; however, two of these showed hypercalcemia. The number of oncocytic carcinoma in the present study is too and diffuse sheet like pattern less to derive any statistical significance and more studies with a greater number of cases are required to validate our findings.

Therefore, the basis of histological criteria for predicting the risk of malignancy is still debatable and the only proof of malignancy of histologically and/or immunohistochemically diagnosed parathyroid carcinoma is either metastasis or recurrence. This is also reinforced from findings of the present study where only 1 (7%) of 14 histologically diagnosed parathyroid carcinoma in 21 years showed recurrence and rest showed a benign behavior. The question still remains—What are reliable features (clinical, biochemical, histological, or molecular) that can diagnose a parathyroid neoplasm as malignant which actually behave in a malignant fashion?