Black Adrenal Adenoma: Is it Unusual?

A 21 years old lady presented with swelling of feet and face. Weight gain and stretch marks with cushingoid features on examination with hirsutism and she had a right adrenal adenoma measuring 3 × 2.5 × 1.5 cm which was black colored. We discuss this black colored adenoma in this image of interest.

A 21-year-old lady presented with chief complaints of swelling of feet and face, weight gain, and stretch mark over abdomen since 4 years. She had a history of delayed and irregular menses associated with the appearance of facial hair, hair on the lower body, and loss of hair over scalp. She had not taken any exogenous steroid. She had deepening of voice which has increased significantly over the last 1 year with a history of bone pains since 1 year and a history of easy bruisability since 1 year. She had Cushingoid features with hirsutism on examination. Her laboratory workup revealed adrenocorticotropic hormone (ACTH)-independent Cushing’s syndrome and imaging revealed an adrenal adenoma measuring 3 × 2.5 cm on the right side. She underwent laparoscopic transperitoneal right adrenalectomy. We found a black adrenal adenoma measuring 3.5 × 2.5 × 1.5 cm. She has an uneventful postoperative recovery. She was discharged on postoperative day (POD) 6 with serum cortisol %3C;27.6 nmol/L and on wysolone 6.5 mg. Final histopathology was suggestive of pigmented adrenal cortical adenoma (Figs 1 to 4). 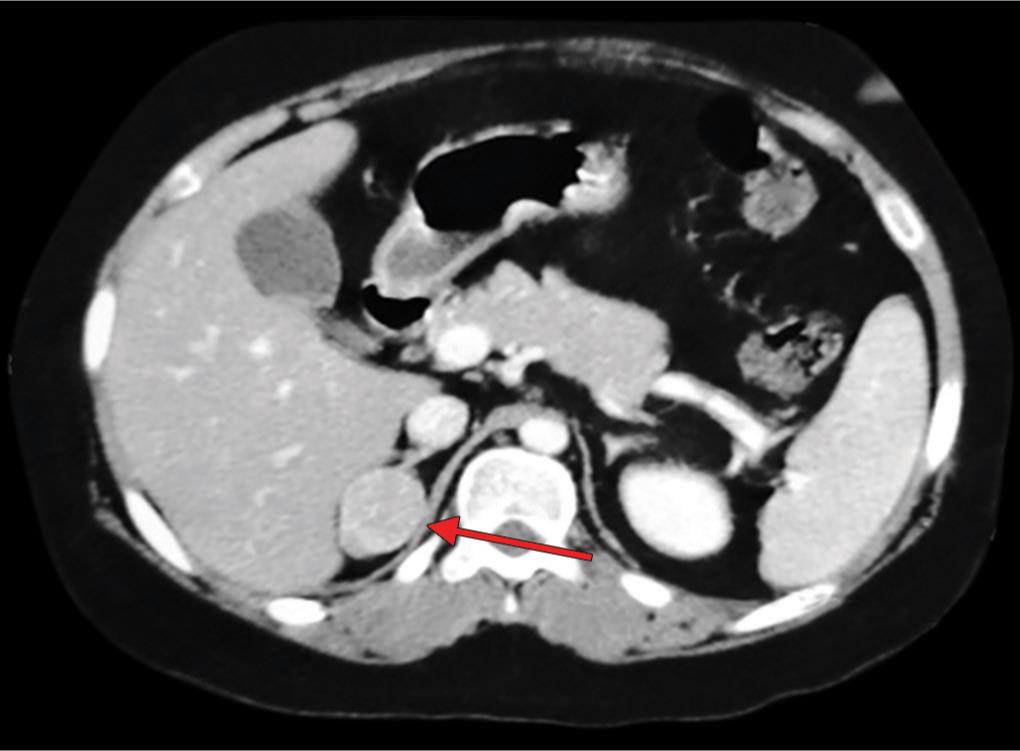 Figs 2A and B: Gross specimen after surgery and after bisection 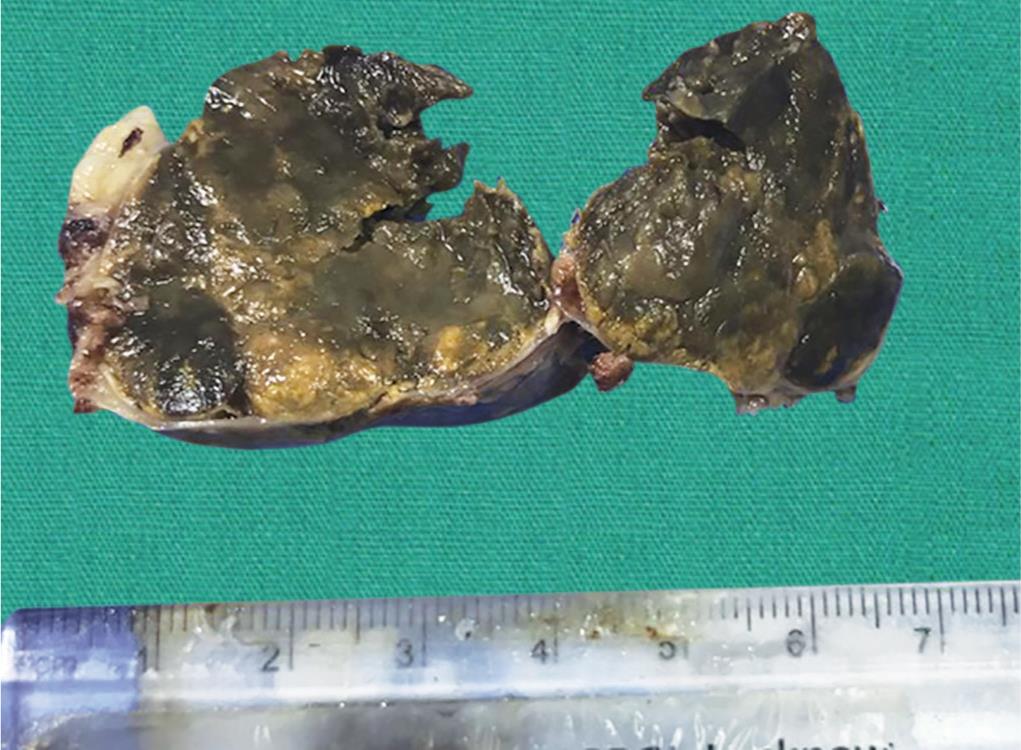 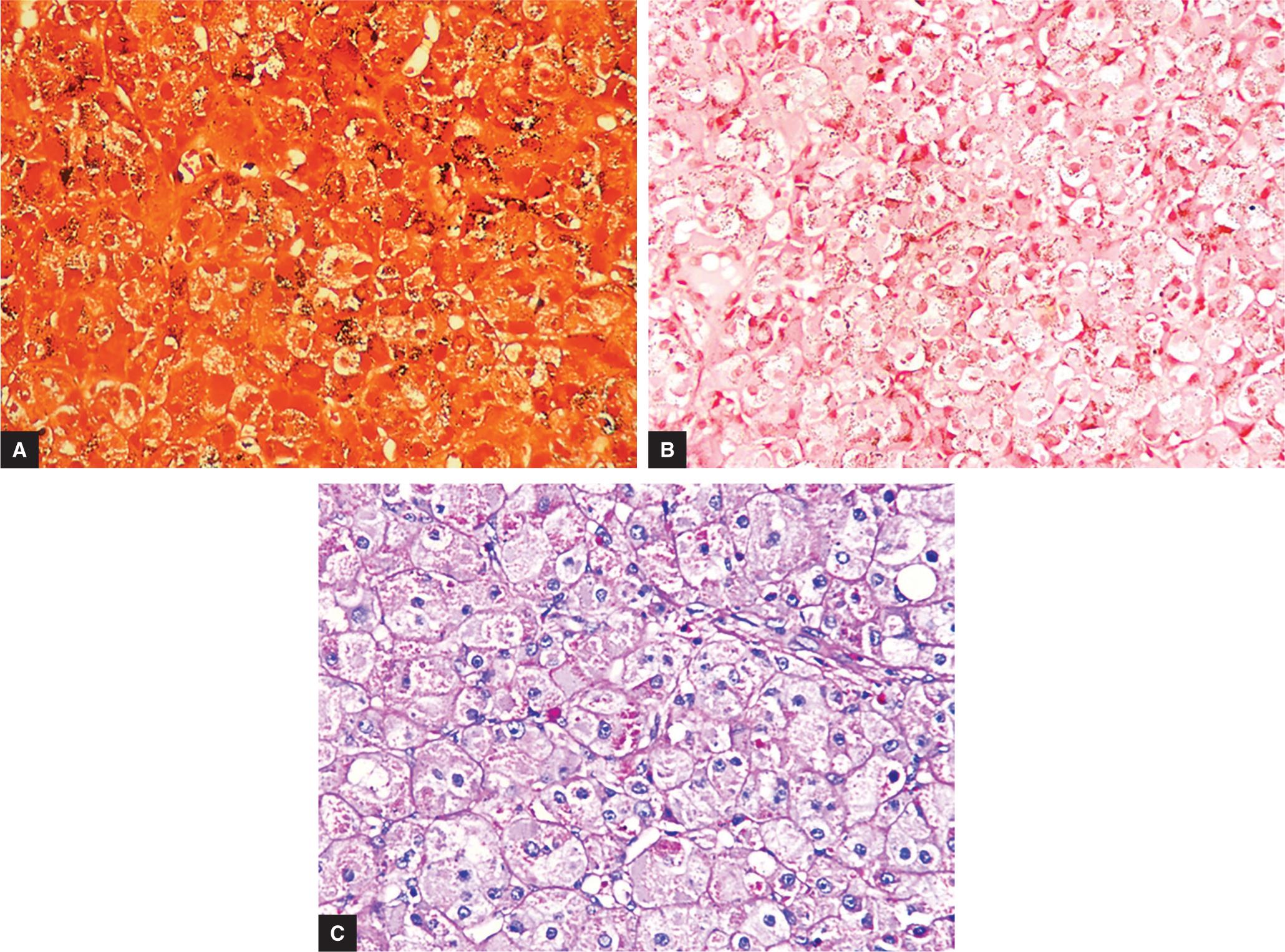 Figs 4A to C: (A) Masson Fontana; (B) Perl stain; and (C) Periodic acid Schiff stain

Black adenomas1 are adenomas that have a dark brown to black color because of the presence of pigment, thought to represent either lipofuscin2 or neuromelanin.3 The former interpretation is more likely, the pathogenesis being probably related to alterations of lipid metabolism induced by the abnormal mitochondria present in the cells of these lesions. Most of these “black adenomas” or “black nodules” are nonfunctioning and found incidentally at autopsy, but on occasion, they have been associated with primary aldosteronism4 or Cushing’s syndrome5 as in this case. These nodules have a higher radiological density than the ordinary yellow cortical tumors.5 In a series6 of 115 adrenal cortical tumors from surgical adrenal samples in Cedars-Sinai Medical Center, not a single black adrenal adenoma was encountered. Although the incidence of black adrenal adenomas has not been formally addressed in other surgical series, the mostly single-case reports of this unique-colored tumor even recently suggested that they are indeed rare in surgical adrenal samples.7 The discrepancy between the high frequency of incidental black adrenal adenomas in autopsy findings and their exceptionally low incidence in surgical series may be due to the small size and nonfunctional nature of the adenomas which avoid the surgery in spite of the tumors’ radiological features. Most of the black adrenal adenomas, like in this case, cause ACTH-independent Cushing’s syndrome, some cause primary hyperaldosteronism, and a few even result in masculinization.7–9 Less frequently reported are nonfunctional black adrenal adenomas which present as incidentalomas.10 With the introduction of computed tomography (CT), magnetic resonance imaging (MRI), and fluorodeoxyglucose-positron emission tomography (FDG-PET), the imaging characteristics of adrenal adenomas in general and the distinct imaging features of black adrenal adenomas, in particular, have now been well described. Unlike most other adrenal adenomas, the black ones exhibit high Hounsfield units (%3E;30) on CT, 85 HU as observed in this case, a high T2 signal and lack of drop of the signal on out-of-phase imaging on MRI, and high standard uptake value (higher than that of liver) on FDG-PET, which all indicate less tumor lipid content but higher tissue density and blood supply, features suspicious of pheochromocytoma, interstitial tumors, and malignancy.10,11 Biologically, however, the black adrenal adenomas are benign without histological evidence of aggressiveness or invasiveness, as our patient’s tumor. Black adrenal adenomas may be considered as one subtype of adrenal adenomas with atypical imaging characteristics. The clinical significance of lipofuscin pigments in black adrenal adenomas remains unclear.