Aim: We aimed to describe an unusual case of a patient presenting with subacute neck and chest tightness, and eventual ecchymosis, leading to the diagnosis of a bleeding parathyroid adenoma. We summarize the current literature and discuss important learning points.

Background: Significant neck hematoma is a rare condition, and related most frequently to trauma. Rarer causes can include bleeding from the thyroid or parathyroid gland.

Conclusion: Review of the literature reveals some similarities to the case described herein, with patients of a similar demographic presenting with symptoms of hoarseness, dysphagia, cervical swelling, and ecchymosis. The physiopathological mechanisms behind such nontraumatic bleeding from the parathyroid gland remains unknown.

Clinical significance: A clinical triad of acute neck swelling, hypercalcemia, and neck and/or chest ecchymosis should evoke the potential diagnosis of ruptured parathyroid adenoma. Once the diagnosis is confirmed, minimally invasive parathyroid is a safe approach in experienced hands.

Significant neck hematoma is a rare condition, and most frequently related to trauma, infection, ingestion of foreign body, or iatrogenic injury following angiography.1,2 Less commonly, spontaneous neck hematoma may occur as a result of thyroid or parathyroid bleeding in the presence of a thyroid cyst, nodular goiter, subacute thyroiditis, or parathyroid adenoma, hyperplasia, cysts, or carcinoma.

Here, we describe a patient presenting with spontaneous massive cervicomediastinal hemorrhage, eventually diagnosed as a ruptured parathyroid adenoma. Once the hemorrhage settled, she was treated electively using a minimally invasive approach. We discuss the optimum and timing of and approach to surgery.

A 62-year-old woman, who was previously fit and well, presented to the emergency department of her regional hospital with subacute neck and chest tightness, occurring immediately following breakfast. She was admitted for further investigations, and during her inpatient stay, developed progressive neck swelling and skin discoloration (Figs 1A and B). There were no compressive symptoms such as dyspnea or dysphagia, and she was not systemically unwell. On examination the neck was diffusely swollen with overlying tenderness and an ecchymosis, which worsened over five days, extending to the xiphisternum and across both breasts (Fig. 1C).

A contrast computed tomography (CT) scan of the neck and chest showed a mass/density seen in the neck, extending from the lateral neck to the prevertebral/paratracheal spaces into the thorax, with a significant hemothorax. She was transferred to our tertiary hosptial’s thoracic surgery unit five days after initial presentation, where she was transfused two units of packed red blood cells for a hemoglobin of 107 g/L with normal vital signs. Ultrasound scan (USS) and repeat computed tomography (CT) scans (Fig. 2) were performed, which confirmed the presence of a 60 × 25 × 101 mm mass in the thoracic inlet, adjacent to the oesophagus and vertebral body. A diagnosis of oesophageal cancer was entertained, and a CT-guided biopsy was attempted, but revealed only a hematoma. As the patient was clinically stable, she was discharged with plans to complete investigations as an outpatient. Several diagnoses were considered, including esophageal cancer, which led to a gastrograffin swallow, endoscopic ultrasound (EUS), and positron emission tomography (PET scan). The EUS revealed a mass 5 cm from the cricopharyngeus, which was biopsied under ultrasound guidance. Cytology revealed epithelioid tumor-like cells of unknown origin. PET scan showed widespread low-grade mediastinal inflammation with no evidence of an FDG avid mass. 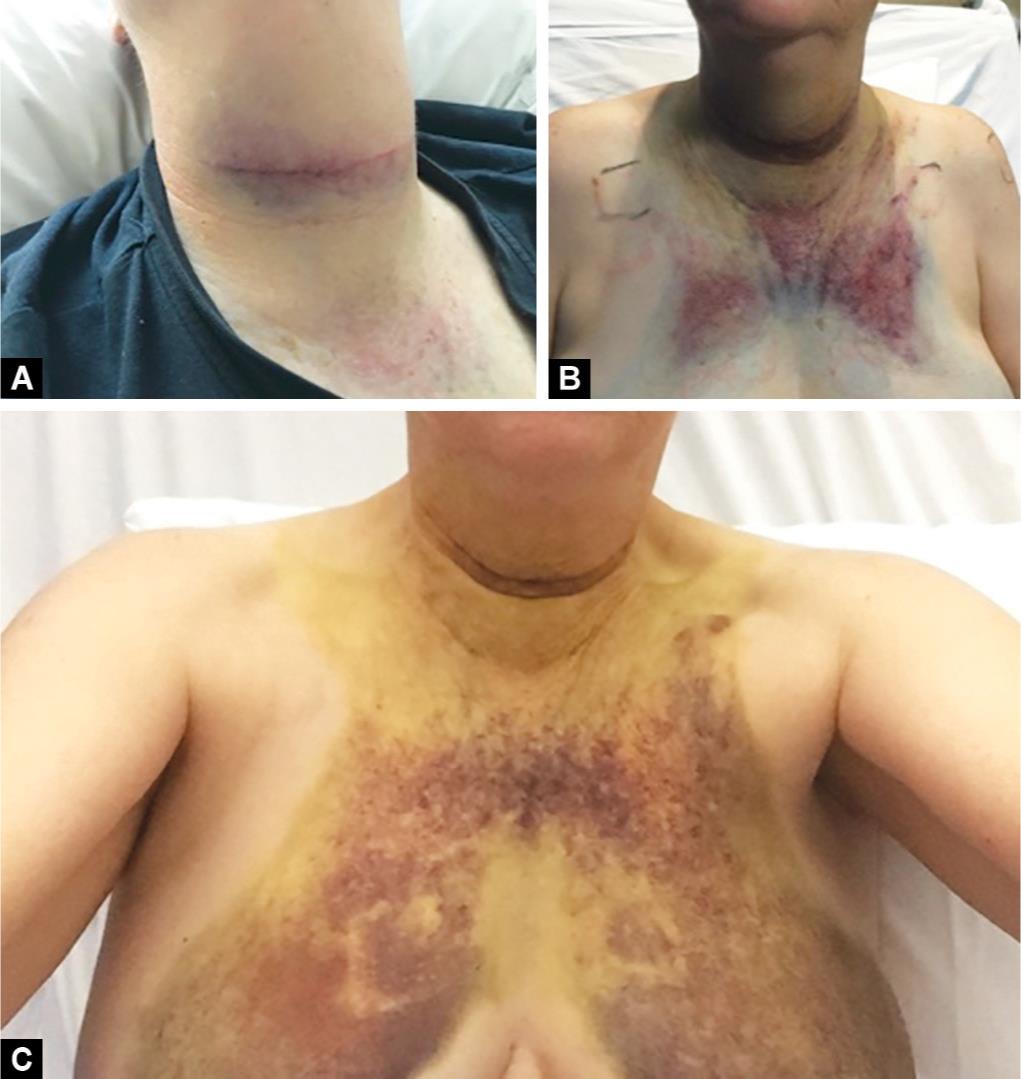 Following a 3-month interval to allow the hematoma to resolve, a contrast CT scan was repeated (Fig. 3A). There was a residual enhancing 11 mm nodule, posterior to the trachea, postulated to be a pathological lymph node, parathyroid adenoma, or ectopic thyroid tissue. This finding prompted biochemical investigations, revealing an elevated parathyroid hormone (PTH) of 10.1 pmol/L (1.6–6.5) elevated corrected calcium of 2.98 mmol/L (2.15–2.60), and deplete vitamin D of 41 nmol/L. Referral was made to the endocrine surgery unit, and parathyroid 4DCT was obtained to further evaluate. This study suggested possible multigland disease, with the target lesion enhancement consistent with a prolapsed right superior parathyroid adenoma, but an additional possible left inferior parathyroid adenoma. On surgeon-performed ultrasound, the target lesion was not visible owing to its posterior location. There was a 12 × 6 mm ovoid hypoechoic lesion just posterior to the left lower thyroid lobe corresponding to the second possible parathyroid adenoma seen on parathyroid 4DCT. However, the presence of a fatty hilum suggested the lesion was a lymph node, rather than a second parathyroid adenoma. Anticipating a difficult operative field after such extensive hemorrhage, and wanting to avoid unnecessary dissection, we then performed a Tc99 parathyroid sestamibi scan (Fig. 3B) to assess uptake in the left-sided lesion. The sestamibi demonstrated a tracer uptake in the prolapsed right superior parathyroid adenoma, but none in the soft tissue nodule adjacent to the left inferior pole, suggesting it was indeed a lymph node. Hence, a decision was made to proceed with a minimally invasive parathyroidectomy. 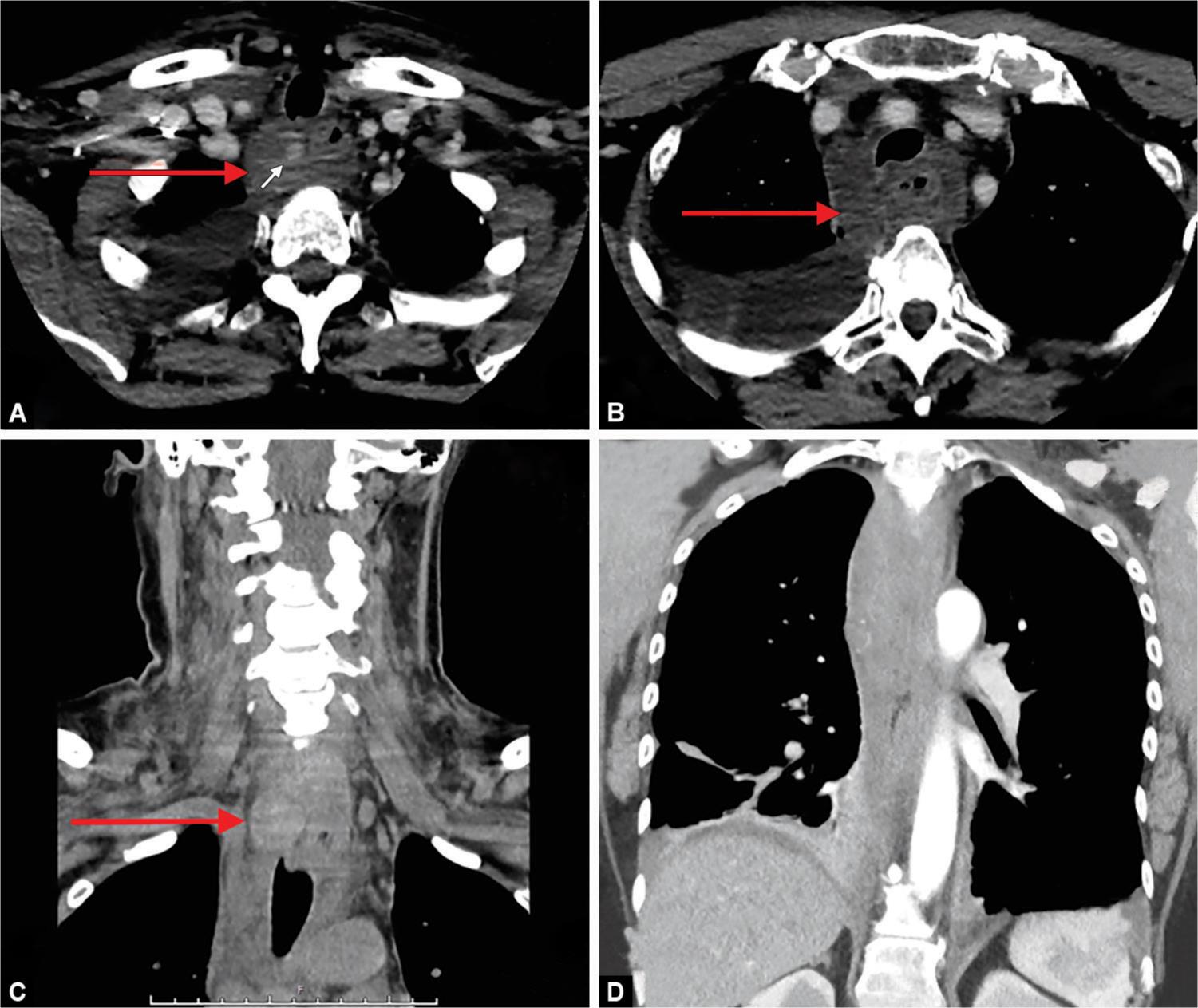 Figs 2A to D: (A and B) Axial; (C and D) Coronal images demonstrating extensive cervical hematoma extending into the thorax

Figs 3A and B: Axial CT image (A) demonstrating resolved cervical hematoma, having a residual nodule with a postcontrast uptake, and sestamibi scan (B) showing an uptake of tracer into a likely parathyroid adenoma

Anticipating a difficult procedure, intraoperative nerve monitoring (IONM) was used, which is not our routine practice. A right lateral 3 cm transverse skin-crease incision was made, and the perithyroidal space was entered between the medial border of the sternomastoid and the lateral border of the strap muscles. Dissection in the central neck revealed firm, fused, opacified tissue planes with residual petechial hemorrhage. A prolapsed right upper parathyroid adenoma adherent to the esophagus, the prevertebral fascia, and the posterior aspect of the recurrent laryngeal nerve was identified (Fig. 4A), and was carefully dissected away from the nerve without injury. No excision of thyroid tissue was necessary, and no contralateral exploration was performed. Pathological examination of the resected parathyroid gland revealed a 813 mg atypical parathyroid adenoma, with minimal fat content and thick fibrous bands. Hemosiderin was evident within the gland (Fig. 4B).

A spontaneous rupture of a bleeding parathyroid gland is an unusual occurrence, first reported by Capps.3 In Capps’ historical case, the diagnosis of a cervical hematoma from a hemorrhagic parathyroid adenoma was identified only on postmortem examination after the patient died suddenly by suffocation, exhibiting the potentially fatal nature of this condition. Since then, approximately 30 cases have been described in the literature.1–36 In almost all cases, blood tests reveal hypercalcemia and hyperparathyroidism. CT, USS, and parathyroid scintigraphy tend to be used in the workup, and definitive surgical management is usually successful (Table 1).

Review of the literature shows that our presented case of parathyroid hemorrhage is similar to other case reports, with patients of a similar demographic presenting with symptoms of hoarseness, dysphagia, cervical swelling, and ecchymosis. Dysphagia (64%) has been described as the most commonly occurring symptom, followed by cervicothoracic ecchymosis (63%) and palpable cervical mass (59%).36 As in our case, the swelling and ecchymosis presents 24–48 hours following the onset of neck discomfort, dysphagia, dyspnea, or hoarseness. The hemorrhage may be intracapsular or extracapsular, dissecting into cervical tissues, often extending into the mediastinum,31 for which the requirement of thoracotomy has been described.35

The physiopathological mechanisms behind such nontraumatic bleeding from the parathyroid gland are unknown. It has been suggested that this may be due to an imbalance between cellular hyperplasia and blood supply, hence rendering the adenomas susceptible to necrosis and bleeding.1,12,33 In the majority of described cases, the pathology of the parathyroid gland was adenoma, and in some cases, it was hyperplasia. Phagocytosis of hemosiderin by macrophages was evident, suggesting hemorrhage from a parathyroid adenoma.28

Although surgical management is successful, the optimum timing for surgery and surgical approach is unclear. Van de Broek et al.33 describe a case of a 79-year-old female on oral anticoagulants, who presented with dyspnea amongst other symptoms (Table 1) requiring elective intubation to control the airway. Laryngoscopy and bronchoscopy revealed compression of both the trachea and esophagus with a subglottic stenosis of the trachea. Imaging with SPECT CT and MRI revealed a 200 mm haematoma from the second cervical vertebra into the posterior mediastinum to the level of the seventh thoracic vertebra. A conservative approach to management was chosen, with reversal of anticoagulation and calcimimetic drug therapy, leading to successful extubation and normalized blood calcium and PTH levels, with a suspicion of autoparathyroidectomy. However, four months later, there was biochemical evidence of recurrent primary hyperparathyroidism, and surgery was performed. Owing to difficulty in identification of the adenoma and because of adhesions, a resection of the right lower thyroid lobe was performed, leading to successful restoration of normal calcium metabolism. In contrast, Merante-Boschin et al.1 describe a two-stage presentation where vague symptoms prompting outpatient investigation were followed by an emergency admission with massive bleeding and severe respiratory distress requiring emergency hematoma evacuation and en-bloc right thyroid lobectomy. 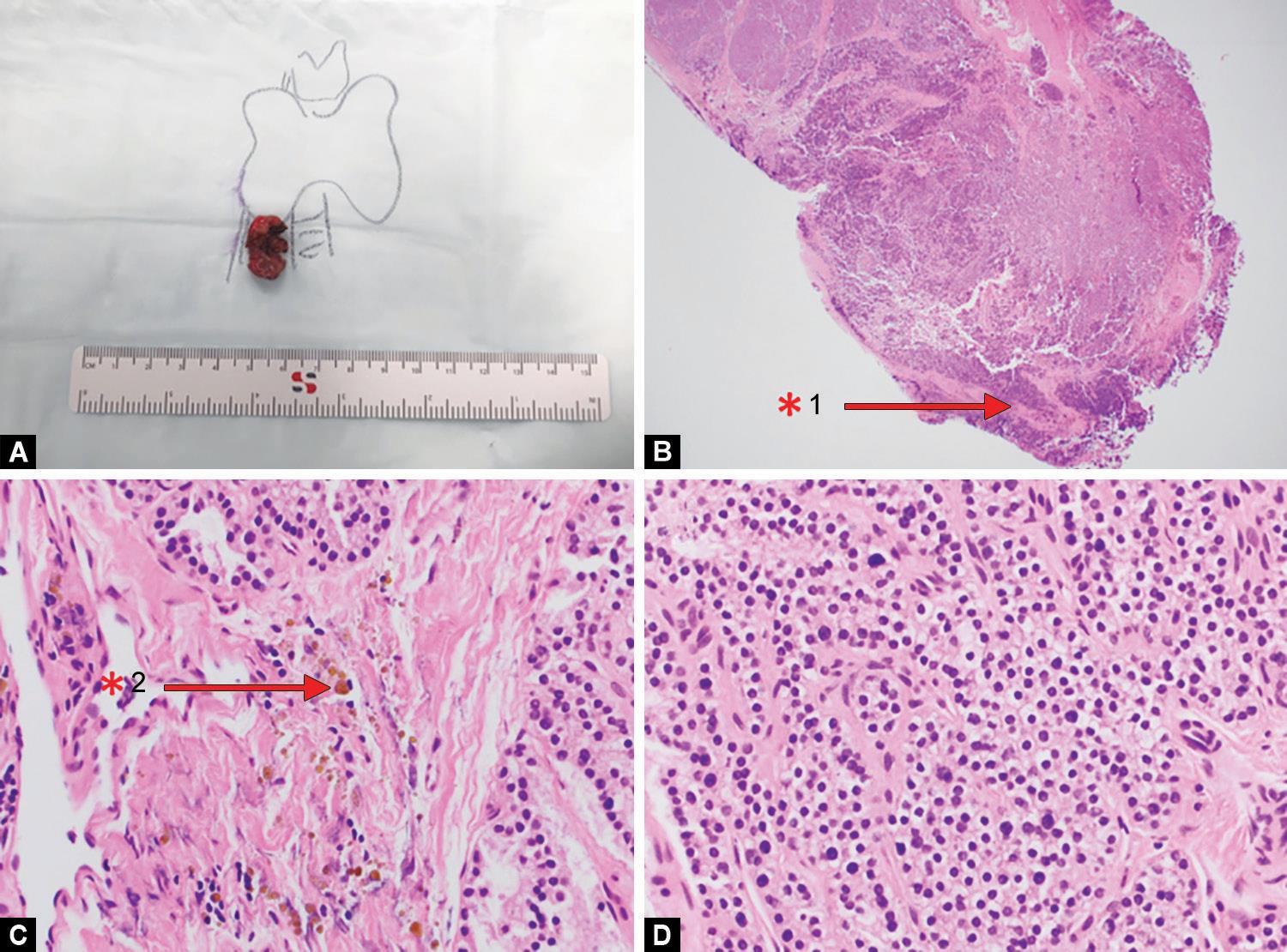 Owing to the potential risk of a second massive bleed after a less-severe sentinel episode, Ulrich et al. suggest a period of about 1 month observation only. They present a case of a patient discharged following a 3-day admission, in the hope of self-infarction of the pathological gland (autoparathyroidectomy). Eventual elective surgical exploration of the neck 3 months later was difficult, revealing a fixed mass at the inferoposterior pole of the left thyroid gland which was attached to the inferior thyroid artery and left recurrent laryngeal nerve (RLN) posteriorly. This mass was dissected from an area of surrounding hemorrhagic change, which included blood clot and fibrinous material.

Early surgery has been reported to be associated with inability to excise the implicated mass, death from cardiac failure, recurrent laryngeal nerve palsy, and concurrent partial thyroidectomy. Chaffanjon et al.36 describe a series of four patients presenting with hemorrhagic parathyroids (of 692 patients undergoing parathyroid surgery) operated at 3 days, 1 month, 3 months, and 4 months, following the initial bleeding event. They conclude that initial conservative management should be employed where possible, with a minimum of 3 months between presentation and surgery. In our presented case, a surgery was performed 3 months after the acute presentation, which, despite the challenging dissection required, resulted in successful treatment with a minimally invasive approach, and voice preservation.

In the event of a bleeding parathyroid adenoma, anecdotal evidence, and first principles suggest initial conservative treatment should be employed, provided the airway is not threatened, to allow time for biochemical diagnosis and, once the hematoma as resolved, accurate localization of the abnormal gland. Although a second episode of bleeding may occur, there is a likely benefit of delaying surgery to minimize the risks to the recurrent laryngeal nerve. Despite not being a routine user, we elected to use IONM, and found it to be helpful during this particular procedure. Despite an appropriate delay, challenging surgery should be anticipated, including fused tissue planes, fibrosis, and hemosiderin, and should be performed in experienced hands.

A clinical triad of acute neck swelling, hypercalcemia, and neck and/or chest ecchymosis should evoke the potential diagnosis of ruptured parathyroid adenoma.29 Careful workup and surgical planning is necessary to establish the diagnosis, and initiate management at an appropriate time, with the appropriate expertise.