Pheochromocytomas (PCCs) are rare endocrine tumors that arise from neural crest cells of the adrenal medulla. They commonly secrete catecholamines and other biological peptides that account for the symptoms namely, hypertension, palpitations, and episodic headaches associated with the condition. However, the symptoms and clinical presentations are highly variable due to variations in catecholamine biosynthesis and secretion because of differences in gene expression. A small proportion of tumors hardly synthesize or release any catecholamines and may have no symptoms and are termed as nonfunctional or subclinical PCCs. The nonfunctional tumors are commonly picked up as incidentalomas and biochemical work-up is usually negative. Undiagnosed subclinical normotensive PCCs could lead to catastrophic consequences during surgery and subsequently.

Pheochromocytomas (PCCs) (Greek phaios “dark”, chroma “color”) or adrenal paraganglioma (PG) is a neuroendocrine tumor arising from the chromaffin cells of the adrenal medulla.1 It is a sympathetic tumor with diverse manifestations due to variations in the catecholamine secretion and their metabolites, unlike the head and neck PGs, which are parasympathetic in origin and do not usually produce catecholamines. While most adrenal PCCs present with the symptoms of hypertension, palpitations, and paroxysmal headaches, about 14–55% of incidental lesions are asymptomatic.2,3 Pheochromocytomas are considered as “the great mimic” due to their diverse presentations, which can pose a challenge to clinicians. Here, we review two cases of PCCs, which presented as incidentalomas, completely asymptomatic, and histology revealed the presence of large PCCs.

A 45-year-old man was admitted following a motorcycle accident with multiple lacerations and fractures of his right upper arm. During his admission, his blood pressure (BP) was completely normal, and he had no symptoms, apart from those related to his trauma. A whole-body computerized tomography scan showed a fracture along with a 5.6 cm right adrenal incidentaloma. The CT showed the lesion to be heterogeneous with areas of hypo-densities in keeping with necrosis (Fig. 1A). Biochemical workup in the form of urinary metanephrines and PCCs screen was completely normal. He underwent laparoscopic adrenalectomy with intraoperative BP fluctuations that were controlled with antihypertensive agents and postoperative recovery was uneventful. Histology showed the presence of PCCs with local capsular invasion and genetic screen revealed no mutations for an inherited disease.

A 55-year old woman presented with symptoms of right upper quadrant pain and dyspepsia and backache. Ultrasound scan of the liver showed no obvious abnormalities apart from a mass measuring about 7 cm above her kidney and this was confirmed with a CT scan (Fig. 1B). Biochemical workup in the form of urinary metanephrines and PCCs screen was completely normal. She underwent open adrenalectomy without any complications during the perioperative and postoperative period; histology showed the presence of PCCs with a pheochromocytoma of the adrenal gland scaled score (PASS) of 4 (Figs 2A and B). A genetic screen showed no mutations for the inherited patterns of disease (Table 1).

Pheochromocytomas are catecholamine secreting neuroendocrine tumors arising from chromaffin cells of the adrenal medulla, with an incidence of about 0.1% of the general population and 0.1–0.2% of patients presenting with hypertension. Not until recently 90% of PCCs was believed to occur sporadically but with advances in genetic studies have shown that up to 25% of patients have an inherited pattern with germline mutations.4–6 Inherited PCCs are associated with conditions such as multiple endocrine neoplasia type II (MEN-2A or MEN-2B), von Recklinghausen’s neurofibromatosis type I (NF-1), von Hippel–Lindau (VHL) syndrome, and familial PG due to germline mutations of genes encoding succinate dehydrogenase (SDH) subunits B, C, and D.

Pheochromocytomas have been considered as a “great mimic” because of its protean manifestations (Table 2), from symptoms of progressive catecholamine excess leading to hypertension, which may be sustained and episodic, hypertensive crisis, cardiovascular manifestations, such as acute myocardial infarction and stroke. The symptoms associated with PCC is shown in Table 3. The most consistent sign in PCC is hypertension,7,8 as a result of activation of α- and β-adrenergic receptors by catecholamine excess. Besides catecholamines, many other vasoactive substances such as a calcitonin-gene-related peptide, vasoactive intestinal peptide, atrial natriuretic peptide, and neuropeptide Y (NPY) may be released, which may influence the response of the vasculature9,10 and this explains the fact that some patients are completely asymptomatic in the presence of catecholamine secreting tumor.7 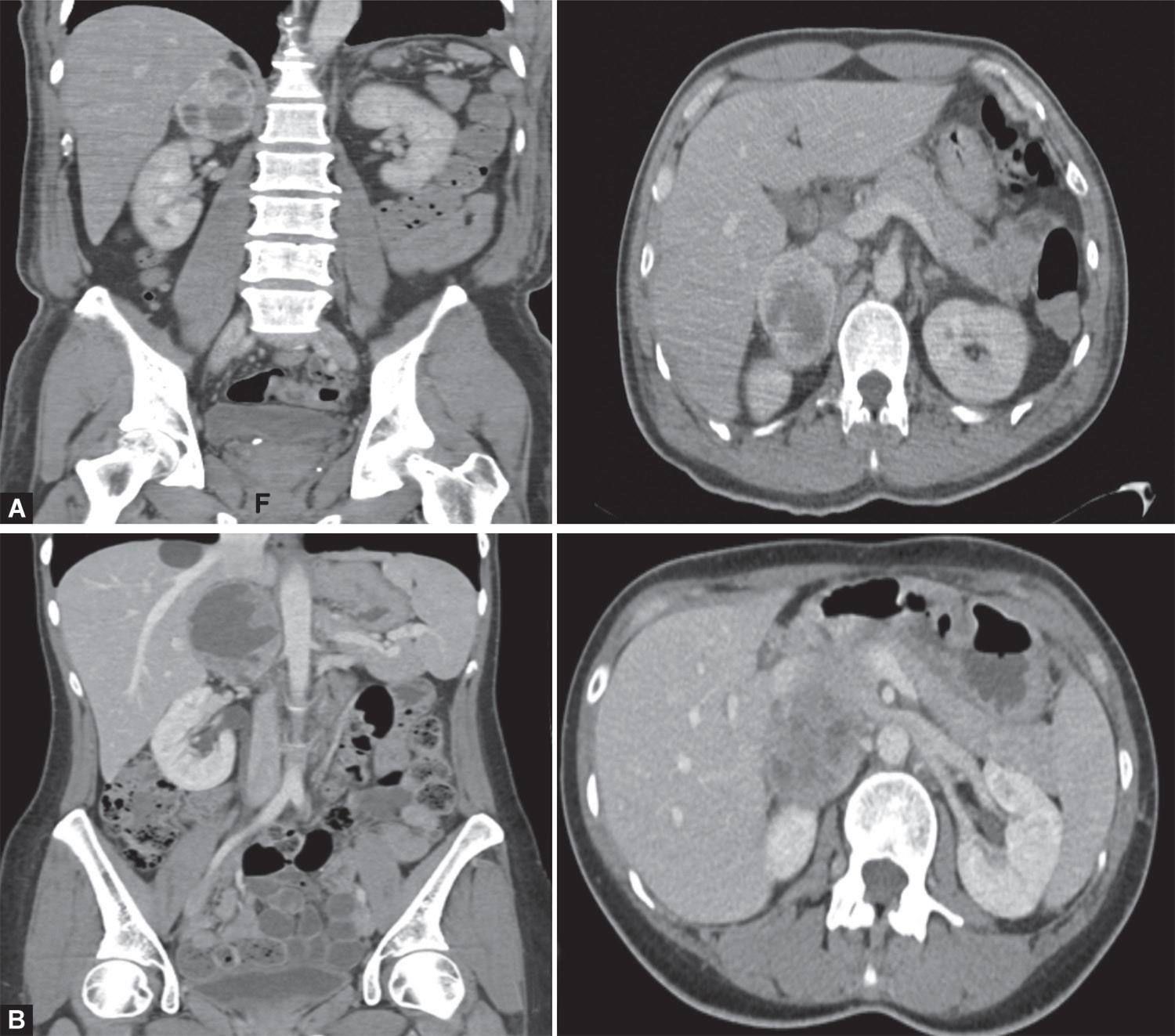 Figs 1A and B: CT scan (coronal and sagittal) images of two patients showing a heterogeneous right adrenal mass

Figs 2A and B: (A) Resected adrenal gland is almost completely replaced by a well-circumscribed solid-cystic tumor, measuring 6 cm in maximum dimension; (B) Photomicrograph shows nests and trabeculae of tumor cells with ample, finely-granular cytoplasm, with intervening fine vasculature (hematoxylin and eosin, original magnification ×200)

Asymptomatic PCCs has been referred to as nonfunctional, silent or subclinical, and nonfunctioning or non-secreting.11–14 Absence of hypertension has been reported in 14–55% of incidental PCCs,2,15–17 especially those with adrenal incidentalomas and dopamine secreting tumors. Similarly, in patients with MEN2 syndrome, symptoms are only present in about 50% of patients and about 30% have hypertension.18 Recent study has shown that PCCs that are normotensive show a downregulation of five genes phenylethanolamine-N-methyltransferase (PNMT), secretogranin II, vesicular monoamine transporter type I, norepinephrine transporter, and NPY involved in key processes of catecholamine metabolism in comparison to those with hypertensive PCCs. This leads to small amounts of catecholamines that are secreted and thereby present with minimal clinical symptoms.17,19 Patients with nonfunctioning PCCs have a lower prevalence of diabetes suggesting a lower level of catecholamine synthesis compared with those with functioning tumors.20

The size of the PCC also correlates with the amount of catecholamines and metanephrines, especially in patients who present with hypertension.34 This correlation is not seen in patients with asymptomatic PCCs. Similarly, large tumors with extensive hemorrhage and necrosis or in patients with SDHB mutations are also associated with mild symptoms or may be completely asymptomatic.35 A recent study has shown subclinical PCCs have reduced output of metanephrines because of impaired synthesis, storage, and release.17 The molecular signatures of subclinical PCCs are completely different from those of clinical PCCs due to differences in neuroendocrine differentiation and chromaffin cell phenotype.36,37

The question of the preoperative α blockade in patients with subclinical PCCs is debatable. North American Neuroendocrine Tumour Society consensus and Endocrine Society guidelines recommend that all patients with PCCs even with nonfunctional tumors should be given adequate α blockade prior to surgery.38,39 A study on 21 patients with nonfunctional PCCs who received preoperative α blocker showed no benefit in maintaining intraoperative hemodynamic instability and increased the use of colloids and vasoactive drugs.40 The potential for serious cardiovascular complications and mortality has been reported however, in patients with subclinical disease.41–45 Patients can sustain severe hypertensive crisis during surgery due to tumor manipulation, and significant postoperative hypotension following surgery.42 The operative duration appeared to be increased in functional PCCs compared with the nonfunctional PCCs, though the exact reason for this is not known.43 The risk of recurrence and malignancy in subclinical PCCs in comparison to clinical PCCs is not very well studied and further understanding of the unique molecular features will help understand the biology of subclinical tumors.

To summarize, subclinical PCCs can pose a significant challenge to clinicians and commonly present as adrenal incidentalomas. Pheochromocytomas with normotension have a distinct clinical, biological, and molecular characteristic distinct to PCCs that present with hypertension. There is also a difference in the concentration of urinary catecholamines between the two types of PCCs. The use of preoperative α blockade in nonfunctioning is debatable but may help manage hemodynamic instability. The long-term outcome of subclinical PCCs needs further evaluation.