Rising Incidence of Neuroendocrine Tumors in Singapore: An Epidemiological Study

Aim: The incidence of neuroendocrine tumors (NETs) is increasing worldwide. This study presents the epidemiological trends of NETs and survival results from Singapore.

Materials and methods: This is a retrospective population-based study of all NETs treated during 1993–2014 in Singapore. The primary outcome studied was trends in incidence of NETs, and secondary outcomes were gender, ethnic and histological variations, and overall survival results.

Conclusion and clinical significance: The incidence of NETs in Singapore has markedly increased nearly fourfold over the last two decades, possibly due to improved detection. However, there are various other unevaluated factors that warrant further investigation.

Neuroendocrine tumors (NETs), which were formerly known as carcinoid tumors, are considered to be rare and this has resulted in scarcity of data on these tumors specific to countries and regions. The indolent nature and atypical presentations of these tumors also contribute to delay in diagnosis and treatment. However, there has been an observed increase in the incidence of these tumors over the past few decades1–3 but an obvious cause for this increase has not been identified.

The increased incidence of these NETs has been reported from all over the world. The age-adjusted incidence of gastroenteropancreatic NETs has increased 3.65 times in the United States and 4.8 times in the United Kingdom over a period of four decades (1973–2007).4 In England, the overall incidence has increased from 0.27 (per 100,000 per year) to 1.32 for men and from 0.35 to 1.33 for women during a similar time period of four decades.5 Data from the Surveillance, Epidemiology, and End Results (SEER) program in the United States show that the reported annual age-adjusted incidence of NETs has increased from 1.09 (per 100,000) in 1973 to 5.25 (per 100,000) in 2004.6 Similar increase in incidence for NETs has been reported from rest of the Europe7–11 and North America2 as well. Epidemiological data on NETs from Asia are limited but those available from Japan12,13 and Taiwan14 have shown similar increment pattern in the incidence as seen in rest of the world.

The rise in the incidence of NETs could be due to a true increase in the disease prevalence or due to increased number of cases diagnosed as a result of improved imaging and diagnostics. Pancreatic NETs are an example for those NETs increasingly discovered during radiologic or endoscopic examinations; however, the frequency of incidental detection of these tumors is unknown.15

The clinical and pathological heterogeneous nature of these tumors together with the trends in age, gender, geographical distribution, and obscure symptoms that they possess and the variable degree of survival that has shown to depend on the site, grade, clinical stage, and the difference in response to multiple treatment modalities can be recognized as important factors16 in this disease spectrum that needs more attention and understanding in order to optimize diagnosis and management of NETs. The aim of our study was to investigate the time trends in the incidence of thyroid cancer in Singapore from 1993 to 2014 using the National Cancer Registry. We also looked at the trends in pathology, treatments, mortality, and ethnic differences, as Singapore has a population made up of various ethnicities.

This is a retrospective population-based study to investigate the trends in incidence, gender, ethnic and histological variations, and overall survival for NETs in Singapore over a period of 22 years.

Data were obtained from the Singaporean national database owned by the local Ministry of Health. This database covered a Singaporean population of approximately 4 million individuals in the early 1990s up to mid-2000s and a larger population of roughly 5 million people beyond the mid-2000s.

The primary outcome studied was the trend in age-standardized incidence rates over the study period of 22 years. This was calculated using the World Health Organization (WHO) standard population.

The secondary outcomes studied were the gender, ethnic and histological variations, and overall survival at 5 years and at 10 years. Posttreatment survival analysis was performed using the Kaplan–Meier estimator and a survival curve was generated.

There are four official ethnic groups in Singapore—namely, the Chinese, Malay, Indian, and others. The highest incidence of NETs was among the Chinese (80.6%).

The aforementioned demographic data are presented in Table 1.

The clinical profile of the NETs in our study, such as primary site, histological type, grade, and stage, has been depicted in Table 3 and described below.

The pathological grading of tumors was in accordance with the 2010 WHO classification scheme for neuroendocrine neoplasms.17 Majority of NETs in this study were NET G1 (51.9%), followed by NET G3 (33.9%). The most common clinical stage for patients in our study was stage I disease (41.0%), and the second most common was final stage or stage IV disease (35.9%).

Table 4 shows the numerical and percentage breakdown of treatment(s) that were offered to patients in the study. The treatment options were radiotherapy, chemotherapy, or surgery—each in isolation as a monotherapy or in various combinations as multimodal therapeutic approaches. The most commonly rendered treatment was surgery alone (36.2%).

As censored on December 31, 2015, the 5-year overall survival for the cohort for all NETs was 38.1%, and 10-year survival was 22.0%. These survival analysis data are portrayed in both Table 5 and the Kaplan–Meier curve in Figure 1. Predictors for poor survival in this cohort include primary tumor site, gender, and advancing age.

To our knowledge, our study is the first Southeast Asian study to report epidemiological data on NETs, enabling us to present a new perspective amidst the existing North American, European, and East Asian literature. Furthermore, being a large population-based study spanning more than two decades improves the accuracy and reliability of our results. 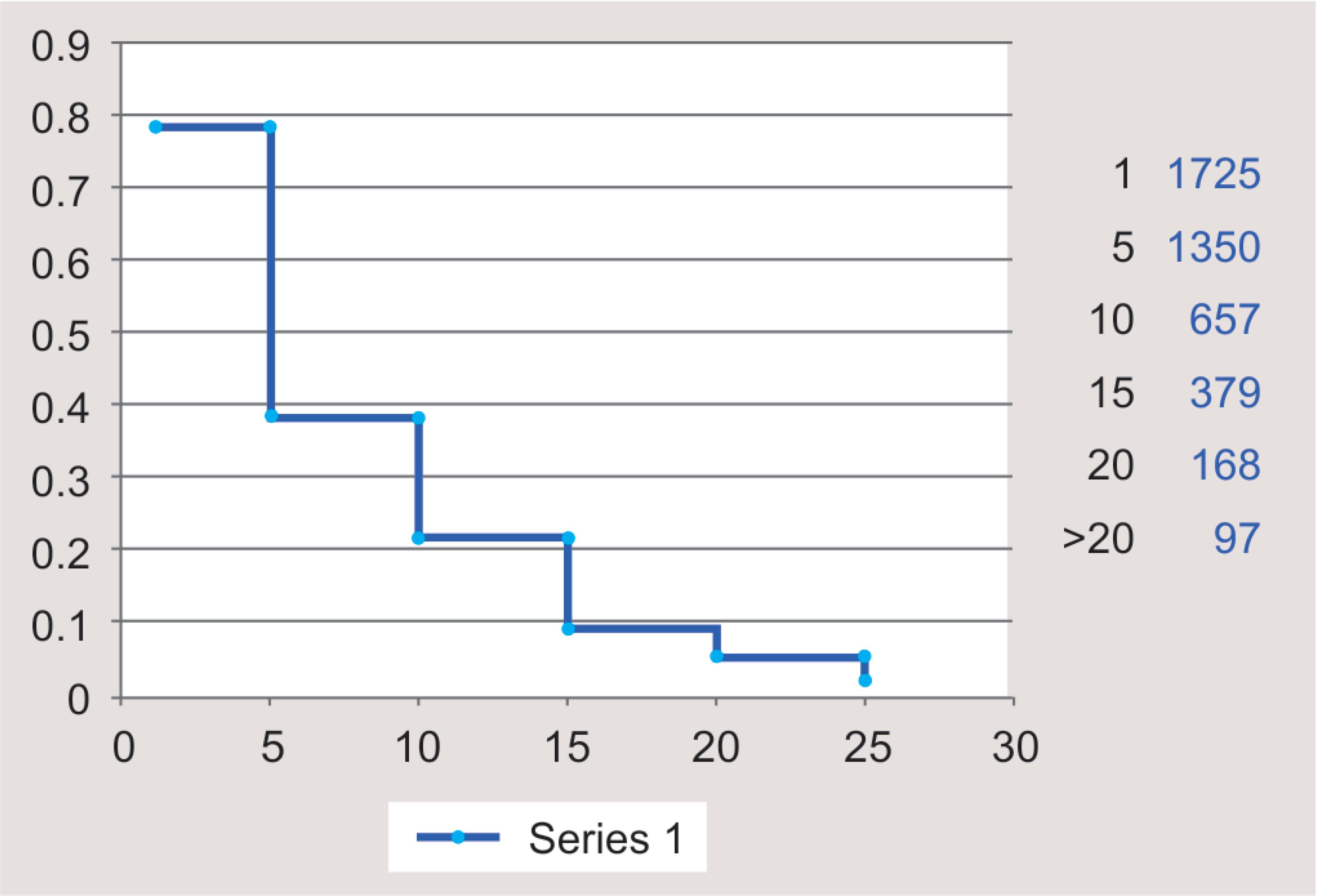 In keeping with postulations in the literature, it is likely that the increased age-standardized incidence rates of NETs in Singapore can be attributed to multiple factors. First, at a semantic level, there has been a global shift in the pathological classification of such tumors from “other entities” like undifferentiated carcinoma to a formal entity called NETs.10

Our incidence results mirror those from Caucasian populations (2.5–5 cases per 100,000 in North America),3 in spite of the fact that the Singaporean population is nearly 76% Chinese and theoretically should have resembled the Taiwanese population instead. This is indeed a noteworthy finding that begs the question as to whether the ethnic minorities in Singapore, that is, the Malays, Indians, and others, contribute at a disproportionately higher level to the incidence rates than their actual percentage make-up within the Singaporean population.

This also leads us to a secondary outcome studied—ethnic variations. Our data have even more interestingly shown that, in fact, the ethnic Chinese population in Singapore made up 80.6% of all patients with NETs in our study. This is commensurate with their representation within our population. As such, the higher age-standardized incidence rates of NETs in Singapore compared to Taiwan are possibly due to factors other than ethnicity alone, and additional genetic and sociogeographical factors including modifiable environmental factors14 and healthcare resource utilization2 should be evaluated in a further study.

This surfaces as a further area to be investigated in future studies, especially given that NETs are a heterogeneous group of tumors with several differing histological types, pathological grades, and a wide range of clinical behaviors.2 It would be beneficial to identify specific subgroups of NETs, which may potentially be more common in the local Singaporean population but which may simultaneously also suggest poorer prognosis and overall survival.

In conclusion, the age-standardized incidence of NETs in Singapore has demonstrated an almost fourfold increase over the last 22 years. This increase may be accounted for by the development of formal diagnostic classification systems for NETs and by advancements in the technology and availability of diagnostic tools. However, given the regional differences in the incidences as well as survival outcomes, further sociogeopolitical and genetic factors need to be investigated and further subgroup analyzes undertaken to identify prognosticating factors.