An Infection Burden on Thyroid (Tuberculosis of Thyroid): A Case Report

Aim: To enlighten the treating physician about the importance of tuberculosis (TB) of thyroid.

Background: Though the prevalence of TB is high in country like India, TB affecting the thyroid gland is a rare entity due to inherent antibacterial properties of the gland. A high degree of suspicion and thorough clinical knowledge is absolutely necessary for identification of this entity.

Case description: A 55-year-old man presented with 8 weeks’ history of swelling in midline of the neck and 2 weeks’ history of pain over the swelling. Blood investigations including the thyroid profile were normal. Clinical examination was suggestive of infected thyroglossal cyst along with multinodular goiter. Ultrasound confirmed the clinical diagnosis and in addition revealed bilateral cervical lymph nodes. Ultrasound-guided fine-needle aspiration cytology (FNAC) of thyroid was inconclusive and FNAC of lymph nodes showed reactive changes. Patient underwent total thyroidectomy along with Sistrunk operation and biopsy of both right- and left-sided cervical lymph nodes. Incidentally, he was diagnosed with hypocortisolism as the patient went in for hypotension intraoperatively, which was managed appropriately. Histopathology revealed TB of the thyroid.

Conclusion: Tuberculosis of thyroid, though a rare entity, should be borne in mind and included in the differential diagnosis, particularly in countries with high TB burden.

Clinical significance: Identification of such conditions preoperatively can avoid unnecessary surgeries as these conditions can be managed by medical treatment.

Tuberculosis (TB) is one of the most prevalent communicable diseases in the Indian subcontinent. Though a common disease, TB affecting the thyroid gland is an extremely rare occurrence, the reason being innate resistance of the gland to infections. Thyroid gland infections are uncommon because of the presence of some inherent resistance to infections by various means such as the bactericidal property of the colloid material, increased vascularity, and the presence of iodine in the thyroid gland.1

A 55-year-old male presented with midline neck swelling of 2 months’ duration associated with 2 weeks’ history of pain over the swelling and fatigue. There was no specific history suggestive of hyperthyroidism or hypothyroidism except for increased fatigability. He did not have fever, breathlessness, cough, or expectoration. There was no history of significant weight loss. He did not have any past history of TB or contact with infected persons.

Clinical examination revealed a midline neck swelling of size 2 × 2 cm moving with deglutition and protrusion of the tongue. The skin showed erythematous changes suggestive of inflammation. Examination of the thyroid revealed an enlarged gland of size 7 × 5 cm with multiple firm nodules involving both the lobes. There was no retrosternal extension or pain over the gland. Multiple lymph nodes were palpable on both sides of the neck with largest in the anterior cervical region measuring 1.5 × 1 cm. Systemic examination was unremarkable.

Blood investigations including thyroid function tests were normal. Chest X-ray did not reveal any abnormality. Ultrasound of the neck showed multiple nodules in both lobes of the thyroid, the largest measuring 1.1 × 1 cm with an infected cystic lesion measuring 2.8 × 1.4 cm in the midline of the neck with multiple benign-appearing cervical lymph nodes. Ultrasonography (USG)-guided fine-needle aspiration cytology (FNAC) of the thyroid showed occasional thyroid follicles and lymphocytes. The FNAC from the cervical lymph node showed a basophilic material with occasional lymphocytes and cyst macrophages.

After a course of antibiotics, the patient was taken up for total thyroidectomy with the Sistrunk procedure (Fig. 1) and biopsy of the largest cervical lymph node. Intraoperatively, multiple nodules were present in both lobes of the thyroid (Fig. 2) with no surrounding infiltration. The cyst suspected to be a thyroglossal cyst was excised along with the central part of the hyoid bone. The patient developed hypotension intraoperatively and was managed with steroids, which was diagnosed and confirmed to be due to hypocortisolism later. The cut section of the thyroid revealed a purulent material and the lymph node revealed a caseous material.

Histopathological examination of the thyroid gland and lymph nodes was suggestive of TB. The part identified as the thyroglossal cyst was in fact a prelaryngeal lymph node with TB involvement. Histological examination revealed clusters of epithelioid cells with necrotic debris, mature lymphocytes, and pleomorphic lymphoid cells (Figs 3 and 4). The patient had an uneventful recovery and was initiated on category I anti-TB treatment. The patient recovered well with medications and remained asymptomatic at 6-month follow-up with complete resolution of all cervical lymph nodes.

Tuberculosis of thyroid is a very rare entity with frequency of 0.1–0.4% in a histologically diagnosed specimen.4 Due to its rarity and absence of specific clinical presentation, diagnosis of TB of thyroid remains a challenge to the treating physician. The mycobacterium can affect the gland directly or can be secondary from other infected organs, which can spread by the hematogenous route.5

Tuberculosis of thyroid may present as nodules or as lymphadenopathy. Involvements of TB lymph nodes are more common in posterior triangle, which accounts for 51% followed by upper deep cervical and submandibular nodes. Anterior group of nodes is very rare accounting for <1%. In our case, we had a prelaryngeal lymph node of the anterior group, which is very rare. Tuberculosis of lymph nodes may present as lymphadenitis, cold abscess, or sinus.6,7

Certain tissues like striated muscles and thyroid are relatively resistant to TB. Tuberculosis of the thyroid can rarely present as acute abscess with pain, tenderness, and fever of unknown origin. Gross TB of thyroid gland may mimic the carcinoma thyroid.1,8 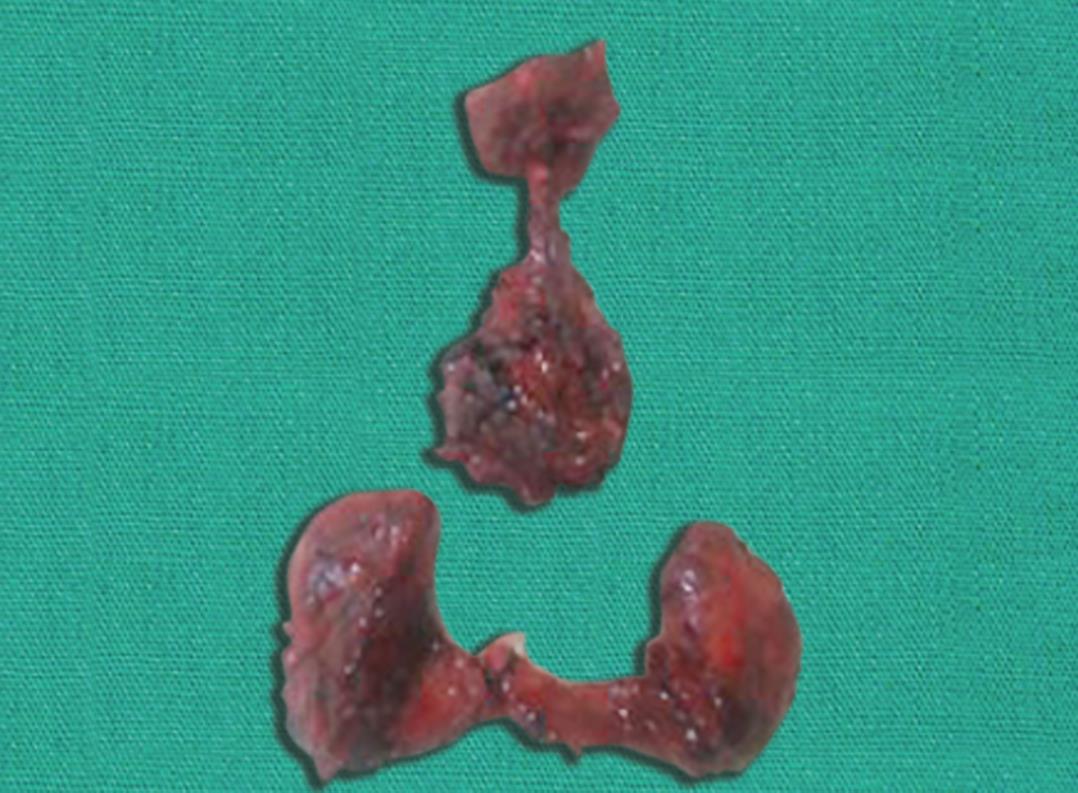 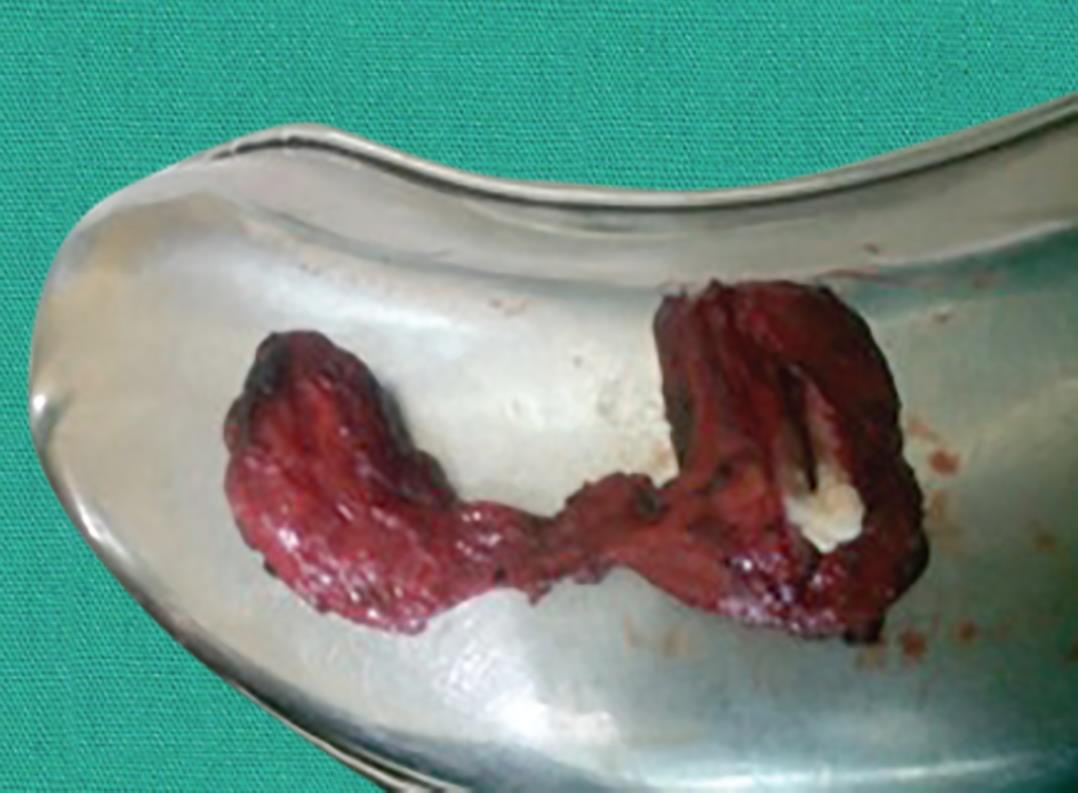 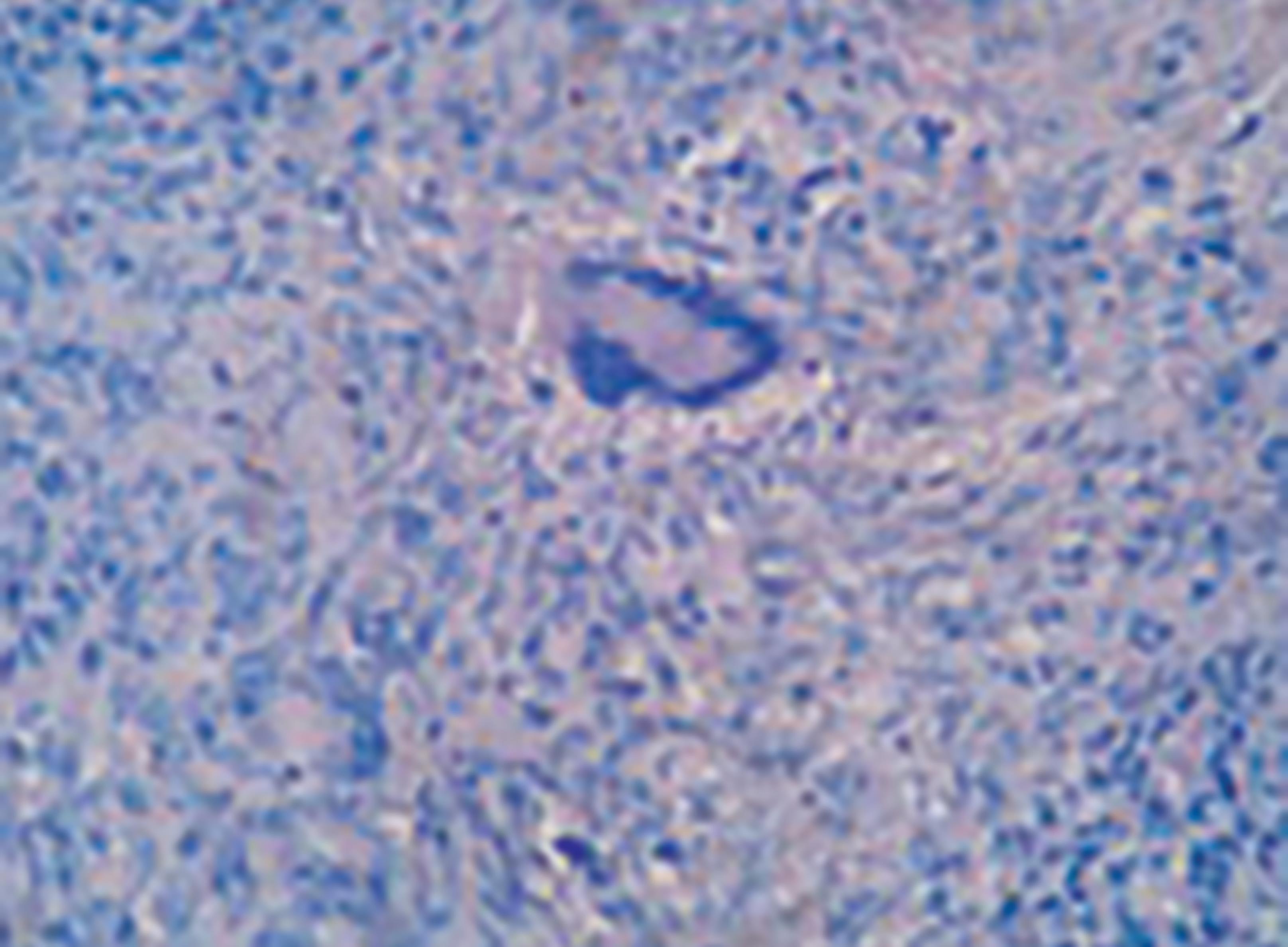 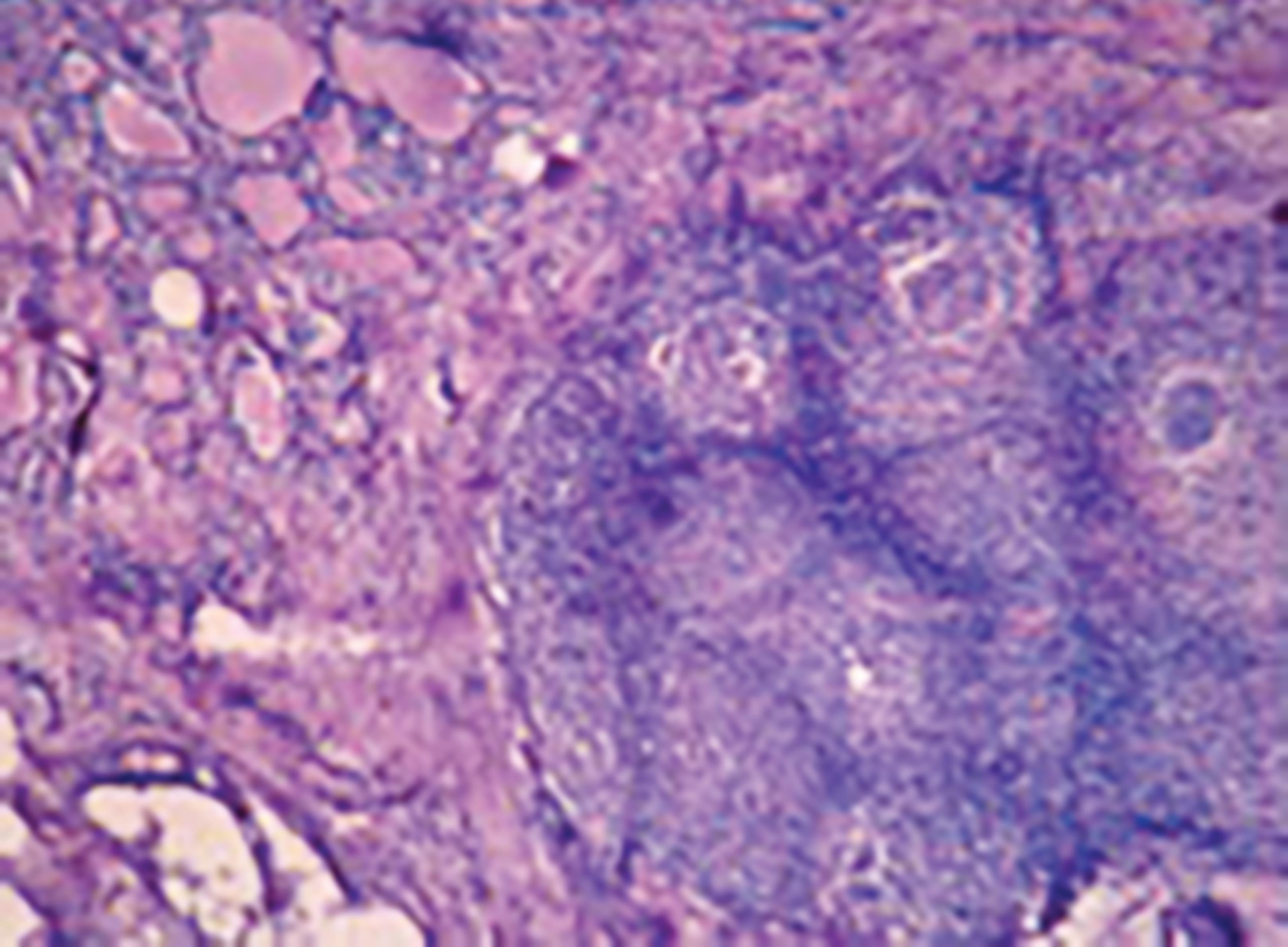 The FNAC is a very useful tool in diagnosing TB lymphadenitis.9 Ultrasound findings are nonspecific, showing a diffuse or multinodular goiter and in some cases these nodules can even mimic a carcinoma.6 The role of surgery is very limited for this condition, as surgical drainage is only indicated in case of a large abscess.10

Thyroid function usually remains normal. The imaging techniques are not very useful in diagnosis and may show hypoechoic, heterogenous lesions similar to the neoplastic lesion.

The treatment of thyroid TB is antitubercular drugs and is now considered sufficient with no requirement of any surgery, provided the diagnosis is made on FNAC. If FNAC fails to give a definite diagnosis of thyroid TB and there is suspicion of malignancy, surgery can be done in the form of hemithyroidectomy and even total thyroidectomy as in our case.1,7

Tuberculosis infection is notorious to cause adrenal insufficiency,15 so conditions like hypocortisolism, which we faced intraoperatively in our case should be kept in mind when dealing with these patients.

Thyroid TB, though rare, should be considered in the list of differential diagnosis of thyroid swellings or abscess in the region of the thyroid, especially in areas where TB is prevalent. Preoperative diagnosis of thyroid TB is necessary to avoid unnecessary surgery in these cases, and a suspicion of hypocortisolism in tuberculous thyroid patients should also be remembered.