Background: Adrenal cysts are uncommon and generally asymptomatic, thus often discovered only incidentally. In the case described here, two giant bilateral adrenal cysts were diagnosed in an emergency setting based on the onset of acute compressive symptoms. Only after a complete diagnostic workup aimed at excluding any suspicion of malignancy, the patient underwent elective and adrenal-preserving surgery.

Case description: A 26-year-old man was hospitalized in the emergency room for abdominal pain and dyspepsia. The ultrasound (US) scan showed two giant masses of both the adrenals. The workup allowed a diagnosis of nonfunctioning giant adrenal cysts, one with evidence of intracystic bleeding. Bilateral surgery was indicated and, on both sides, a wide resection of the cyst wall was performed laparoscopically, trying to preserve the adrenal function. At follow-up, the patient shows no evidence of recurrent disease.

Conclusion: Despite an acute onset of compressive symptoms that led the patient to hospitalization in an emergency setting, the symptoms of the patient were cured at first. A correct and thorough subsequent workup was then performed that allowed to make a diagnosis of bilateral giant adrenal cysts without any sign of malignancy. This diagnosis indicated a bilateral adrenal-sparing decompressive procedure that, after follow-up, resulted in long-term cure.

Clinical significance: A correct imaging played a key role in planning the treatment since it could exclude any suspicion of malignancy, thus allowing to indicate a “functional” approach aimed at avoiding a lifelong and difficult-to-manage substitutive therapy in a young patient.

While adrenal incidentalomas are common, being present in autoptic series ranging between 1% and 8.7% of the population,1 cystic lesions of the adrenals are rare (0.064–0.18% in autoptic findings) and often asymptomatic.2 Despite their benign appearance, a careful hormonal and instrumental evaluation is always indicated in all cysts >1 cm to exclude hormonal activity and to exclude any sign of malignancy for all lesions larger than 5 cm. When adrenal cysts are >5 cm and cause compressive symptoms, surgery is recommended, when possible through a laparoscopic approach.2 In the case presented here two bilateral giant cysts (20 and 17 cm, respectively) were diagnosed in an emergency setting because of the onset of compressive symptoms. Surgery was immediately indicated but was performed only after a thorough diagnostic workup that allowed to perform the correct diagnosis of benignity for both adrenals, thus allowing an adrenal sparing procedure.

A 26-year-old man was hospitalized in the emergency room for the acute onset of upper left abdominal pain, lasting for 12 hours, associated with abdominal tension and diarrhea. He also complained about a chronic sense of tension in the upper abdomen and dyspepsia lasting for several days. The familial and clinical history of the patient were both completely negative.

The US examination, performed in an urgent setting, showed a large cystic lesion (20 cm in its largest diameter) in the left adrenal space with thick walls, hyperechoic contents, and internal septa in the left adrenal space (Figs 1A and B). The mass showed no vascular sign when analyzed with the color Doppler technique. In the right adrenal space, the US showed a second a large lesion (17 cm in its largest diameter) that was separated from the kidney and characterized by ovoid morphology, well-defined margins, thin walls, and anechoic content (Figs 1C and D), and these features were diagnostic of a simple giant adrenal cyst.

A contrast-enhanced magnetic resonance (MR) was then indicated and confirmed the presence of two bilateral giant adrenal cysts (Fig. 2A), which caused dislocation and compression of the surrounding structures. On the right side the cyst was homogeneous, and it only displaced the homolateral kidney, and the left side it compressed the stomach (causing the dyspepsia). It had thick walls with a hemorrhagic content. This cyst was spontaneously hyperintensive on T1WI (Fig. 2B), with intralesional component without contrast enhancement, evaluated also on subtraction imaging (Figs 2C and D), suggestive of intralesional clots. No active bleeding was detected. Edematous imbibition of left retroperitoneal fat and pelvic fluid collection were also associated. 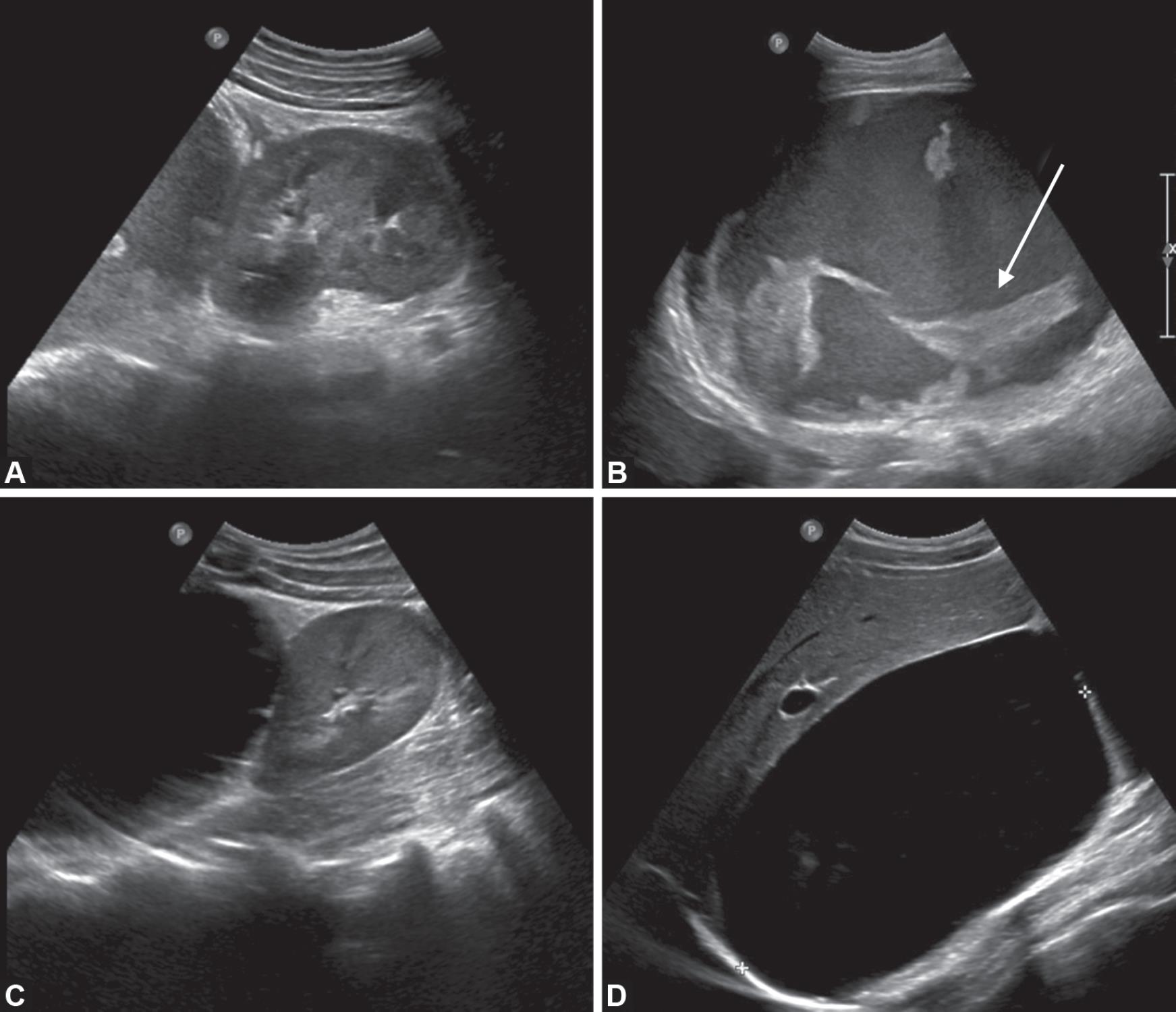 Figs 1A to D: The US longitudinal scan shows a large cystic lesion in the left adrenal space displacing homolateral kidney (A) with thick walls, corpuscular content, and hyperechoic septa (B, white arrow). The US longitudinal scan of the right adrenal space showed another large cystic lesion displacing homolateral kidney (C) with anechoic content and thin walls (D)

A complete endocrine workup did not show any hormonal activity from the cysts, and the patient was then referred to the endocrine surgeon.

At first, an attempt to drain the cyst on the left side was performed: a 10F catheter was placed under US guidance, and the fluid was sent for cytology and microbiology analyzes (both showing negative results). In 3 days, the cyst drained around 3000 cc of dark-brown fluid, without ever reaching its complete evacuation. The drain was therefore removed. One month after the procedure, the left cyst returned to its original size, thus indicating a surgical solution of the disease.

The main issue was to plan the surgical strategy, trying to balance the oncological appropriateness with the preservation of the endocrine function of the adrenals, which was deemed essential in such a young patient.

Given the absence of any suspicion of malignancy at the preoperative imaging, it was decided that a complete adrenalectomy was not necessary in this case, despite the large size of the glands. Nevertheless, bilateral laparoscopic surgery was indicated, with the only purpose to remove the compression on the surrounding structures and taking care to maintain a normal hormonal status. The two sides were operated separately, to be sure to avoid a complete adrenalectomy at the first surgery, thus trying to lower the risk of adrenal insufficiency after the resection of both masses. At surgery, it was immediately evident that, as expected, both lesions were only compressing the surrounding structures; and while the right side lesion was full of clear fluid, the left one was clearly hemorrhagic. After a proper insufflation and positioning of the trocars, the cysts were opened, aspirated (to avoid spilling of the intracystic fluid), and their walls widely resected, to avoid possible recurrences. The final pathologic diagnosis revealed two adrenal pseudocysts without histologic signs of malignancy.

At 3-month follow-up, the patient was completely asymptomatic and did not need any hormonal replacement therapy; the US scan showed no residual disease in both the adrenal regions (Fig. 3), thus confirming the good outcome of the surgery and the success of the therapeutic strategy.

Adrenal cysts are uncommon findings, usually asymptomatic and incidentally discovered.2,3 Nevertheless, an adrenal cyst can cause symptoms because of either its size or its hormonal secretion. In rare cases, they can complicate and lead to adrenal insufficiency or hemodynamic shock due to intralesional bleeding.4–6 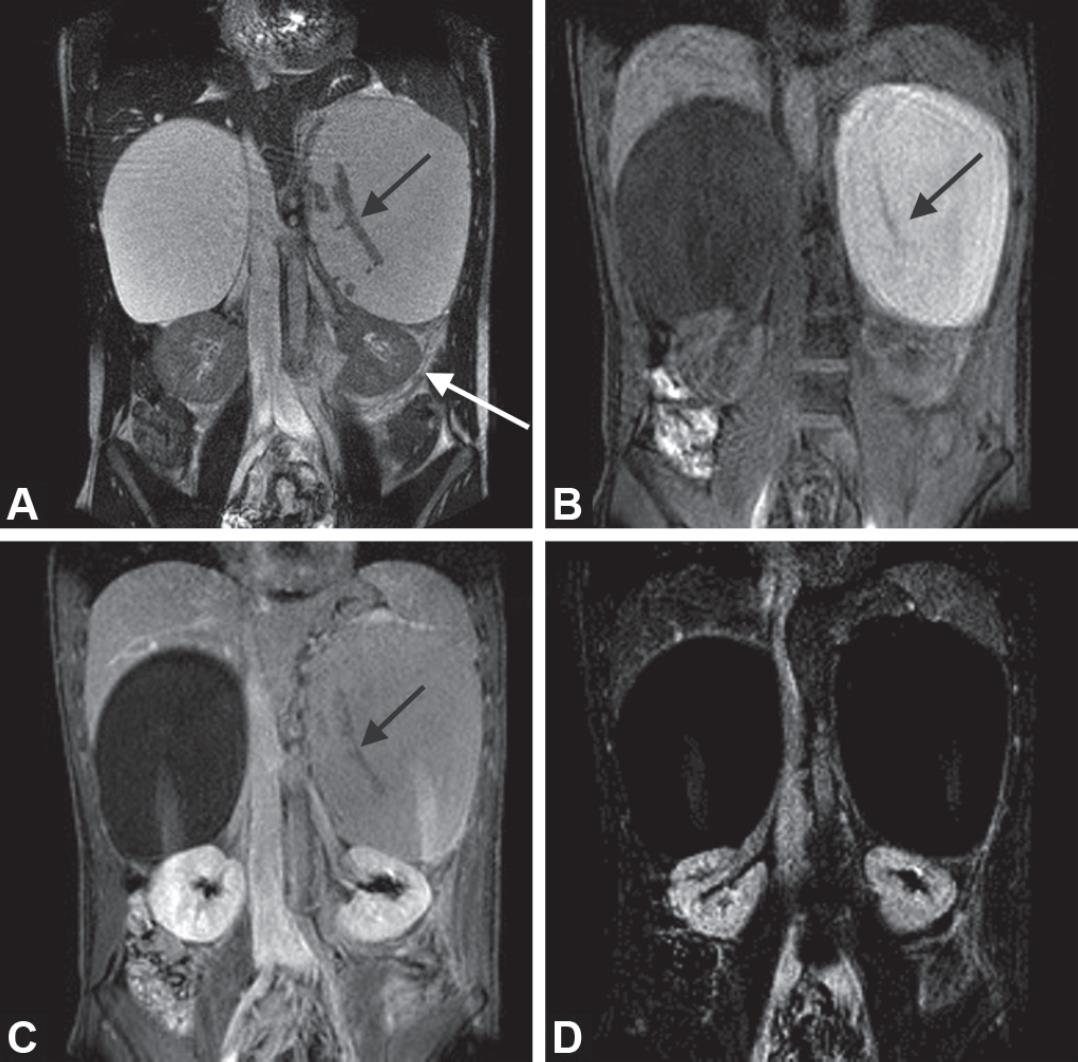 Figs 2A to D: Coronal MRI confirmed the presence of bilateral giant adrenal cysts: the left one was hyperintense on T2WI (A) and on T1WI before contrast (B) because of its deoxyhemoglobin content, suggestive of a hemorrhagic lesion in a hyperacute phase (%3C;12 hours) according to pain onset. Moreover, intralesional component and septa were hypointense on T2WI and T1WI before and after contrast administration (black arrow, in A to C) and did not showed contrast enhancement also on subtraction imaging, features suggestive of intralesional clots (D)

Adrenal cysts can be divided into three main groups: classic, parasitic (as hydatid), and cystic degeneration of tumors such as neuroblastoma, ganglioneuroma, pheochromocytoma, or teratoma.7,8 For this reason, a complete endocrine and oncologic workup is mandatory to rule out the possibility of a neoplastic lesion.

From an operative point of view, giant adrenal cysts are often a diagnostic dilemma,9 especially concerning the correct localization of their origin.4,10,11 In our case, both ultrasonography and MR have been able to diagnose preoperatively the adrenal origin of the lesions, allowing a correct diagnostic management and treatment planning.

In the case displayed here, our patient did not show any predisposing factor for adrenal hemorrhage, such as abdominal trauma, infection, anoxia in infants, hemorrhagic diathesis, and embolism.13

Laparoscopic adrenalectomy is considered the treatment of choice for these lesions. The US-guided percutaneous drainage is a possible alternative, but it does not allow a proper histologic examination and, in this case, was not successful since the cyst recurred after a very short time. In case of giant cysts, some authors suggested the choice of an open adrenalectomy to have a better control of large masses,14 but the surgical approach depends strictly on surgeon preferences and expertise.

In our patient, the important issue was not only to treat the cysts and their compressive symptoms but also to guarantee a sufficient adrenal function in such a young patient. 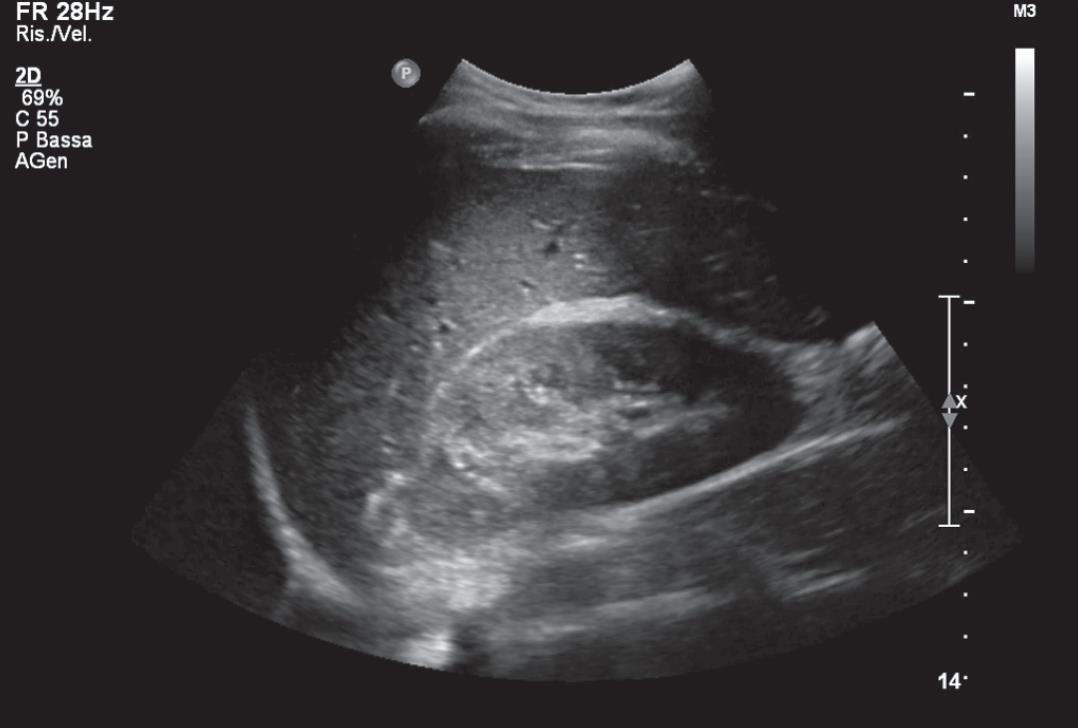 Fig. 3: The US scan performed at 3-month follow-up shows no residual disease and a normal appearance of both the adrenals (right adrenal in the figure)

For this reason, it was decided to simply resect the cyst wall on the left side (the priority given by the symptoms) with a laparoscopic approach, and only at the second time (when the pathologist confirmed the absence of a complete adrenal gland in the specimen), the right lesion was treated the same way (Fig. 2D). The patient was therefore successfully treated, and the postoperative courses were uneventful. At present the patient does not require any cortisone support.

Giant hemorrhagic adrenal cysts are a rare clinical entity. Diagnostic algorithm should include imaging and hormonal evaluation. Surgery is required as definitive treatment of large, hemorrhagic, and/or malignant lesions; and histopathological examination remains the gold standard to establish definitive diagnosis.

In this case, imaging played a key role in planning the treatment since, despite the large size of the masses, it could exclude any suspicion of malignancy, thus allowing to prefer a “functional”, rather than an oncologic approach that would have led the young patient to a lifelong and difficult-to-manage substitutive therapy.