Bilateral Level I Lymphadenopathy in Differentiated Thyroid Carcinoma: A Case Report and Review of Literature

Lymph nodal metastases in differentiated thyroid cancers (DTC) occur in 30–90% of all cases.1 A major question remains about the therapeutic benefits of a more or less extensive lateral lymphadenectomy as metastases to levels I and V are infrequent, and extensive dissections may add to the morbidity. We herein report a case of papillary carcinoma thyroid with bilateral level I–V lymph node metastases.

Differentiated thyroid cancer (DTC) is second most common endocrine malignancy, second only to ovarian malignancy.1 Papillary thyroid cancer (PTC) accounts for about 80% of all DTC. Cervical nodal involvement are seen in PTC in 30–90% cases. The regional metastasis is most commonly in central compartment followed by the lateral compartment. Level III is most commonly involved in lateral compartment (52%) followed by level IV (45%), level II (30% with IIa 30% and IIb ∼15%), level V (25% with Va <8% and Vb ∼21%), and level I (<5%).2 There is proven therapeutic role of lateral selective lymph node dissection in patients with PTC; however, its prophylactic role is still debatable.3 We herein report a patient presenting with PTC with level I lymph nodal metastases.

A 60-year-old lady presented with history of swelling over the anterior aspect of neck since 10 years with rapid progression in size and ulceration since past 4 months. She had history of similar swelling over the anterior aspect of neck 12 years back for which she underwent surgery although no records were available. There was no history of any compressive symptoms and hyperthyroidism or hypothyroidism. On examination, she had 7.5 × 6.5 cm swelling in left thyroid region with restricted mobility, bosselated surface, and a healed ulcer of size 1 × 1 cm over the skin. Level I, II, III, IV, and V lymph nodes were palpated bilaterally (Figs 1 and 2). Her systemic examination was essentially normal.

Patient underwent completion thyroidectomy with central compartment lymph node dissection and bilateral modified radical neck dissection. Peroperatively, multiple level I, II, III, IV, V, and VI lymph nodes were enlarged—largest of size 4 × 3 cm. The left sternocleidomastoid was infiltrated and excised. The left common carotid artery was encased with tumor for which a subadventitial sharp dissection was performed. Final histopathology was suggestive of positive tumor deposits for papillary carcinoma in all 26 lymph nodes. The postoperative period was uneventful, and the patient was referred to nuclear medicine for further radio-iodine ablation therapy. 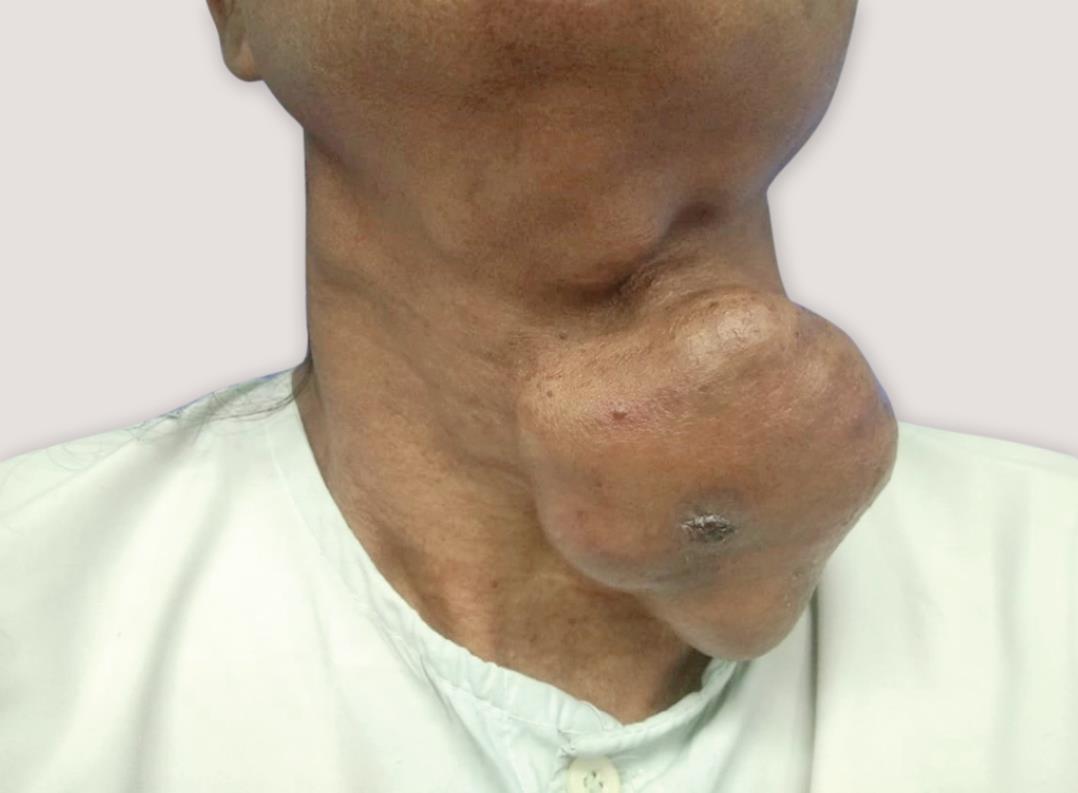 American Thyroid Association Guidelines 2015 for management of DTC state that therapeutic lateral neck compartmental lymph node dissection should be performed for patients with biopsy-proven metastatic lateral neck nodes.4 Sivanandan et al.5 were the first to describe the lateral neck levels that are commonly involved in PTC, where level III was the most commonly involved and level I was the least commonly involved. Studies by Kupferman et al.6 and Sivanandan et al.5 suggested routine comprehensive neck dissection for regional metastasis and Caron et al.7 proposed that selective neck dissection of levels III and IV in the appropriate patient is sufficient when other nodes were clinically negative.

Eweida et al.8 conducted a prospective study on level I lymph node involvement in patients with N1b stage. The results revealed that level I was involved in 13.9% of patients. The study concluded that it was prudent to include level I in therapeutic neck dissection for N1b patients in selected cases of multiple level involvement and macroscopic extranodal invasion (Table 1). 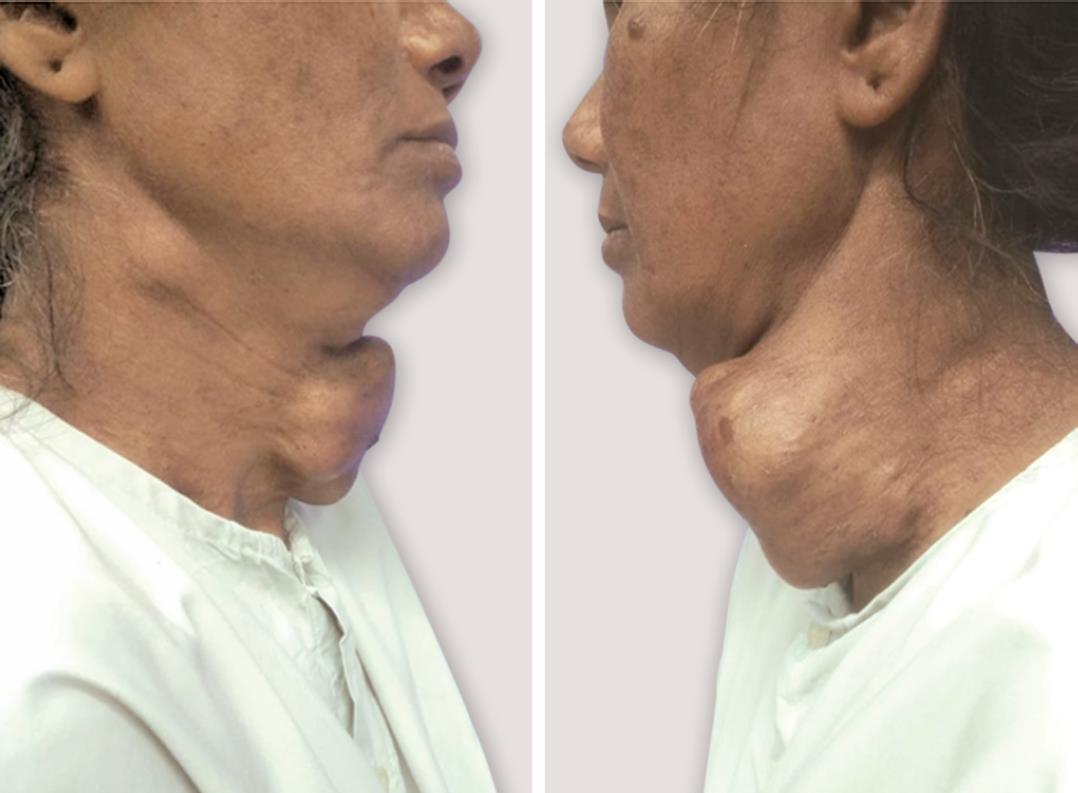 Figs 4A to C: Multiple necrotic lymph nodes in bilateral levels I to V 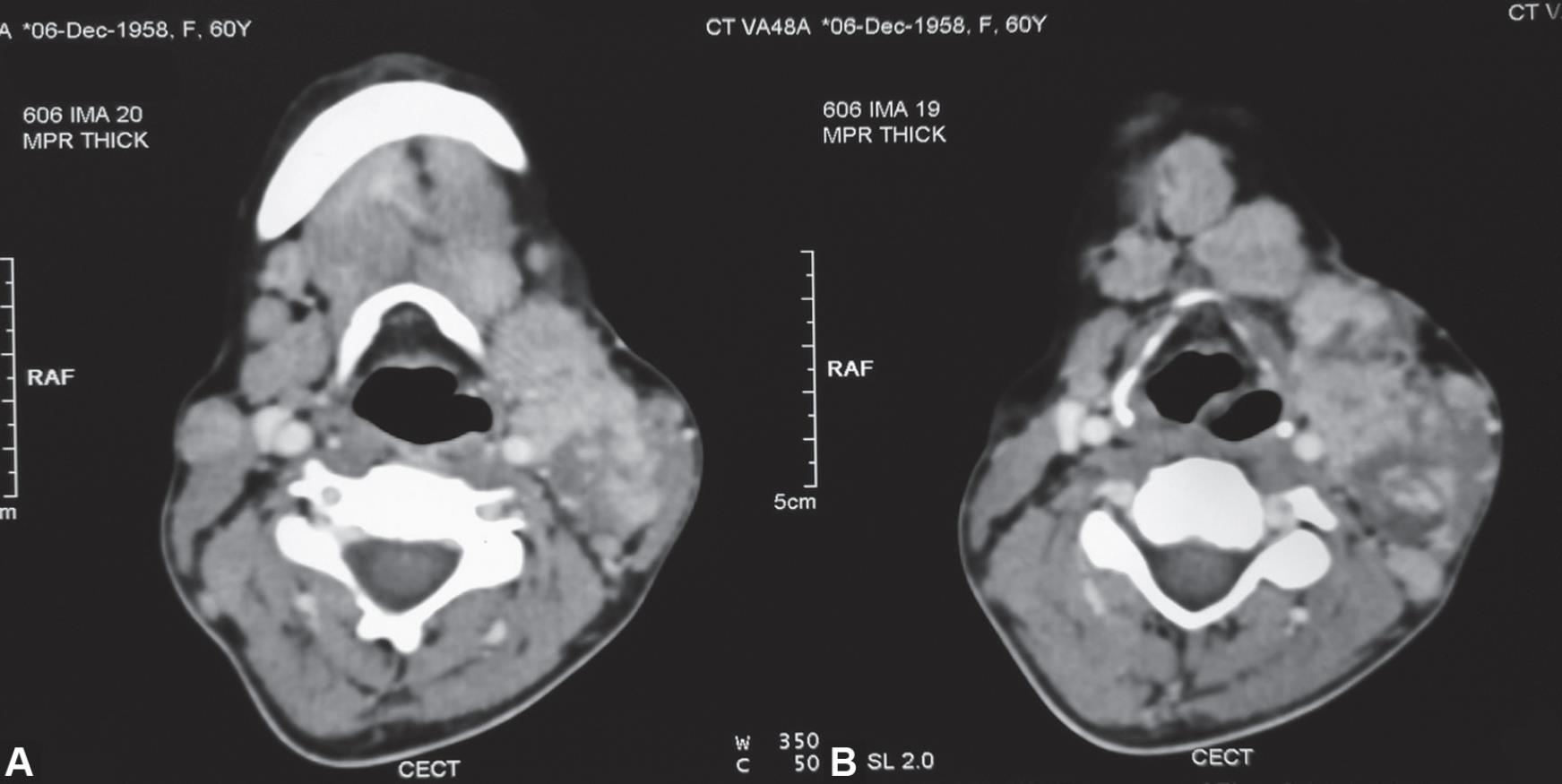 Figs 5A and B: Multiple necrotic lymph nodes in bilateral levels I to V, largest 20 × 15 mm

Lymph nodes 8–10 mm in size that can be localized on anatomic imaging may be considered targets for surgical removal.4 Cross-sectional imaging helps in the identification and assessment of extranodal disease, and its relationship with the great vessels, trachea, larynx, esophagus, and neural structures. In a meta-analysis comparing the diagnostic performances of computed tomography (CT) and ultrasound for lateral cervical lymph nodes, CT and ultrasound were found to have similar sensitivities and specificities, although CT and ultrasound combined were superior to ultrasound only.11

Some studies favor selective nodal dissection in the absence of clinical or radiological positive nodes, heavy nodal burden, or gross extrathyroidal extension.8,9,11 In the study by Eweida et al.,8 where the incidence of level I positive nodes was 13.9%, two patients (6.7%) experienced deviation of the angle of mouth. Marginal mandibular injury in nodal dissection involving level I reaches up to 18%.14 A careful selection of patients requiring level I dissection is thus highly recommended to avoid unwanted complications of nerve injury.