Materials and methods: A retrospective cohort study was performed evaluating patients who had thyroid surgery from January 2011 to October 2016. Patients with total thyroidectomy alone were compared with those with prophylactic central neck dissection (pCND). Histology was reviewed for tumor size and nodal disease.

Results: One hundred and six patients were recruited for this study. More than half of thyroidectomies with pCND were found to be positive (36/57). This is regardless of tumor size, although tumor %3E;20 mm was more likely to have a nodal disease (OR 2.40 95%; CI 0.58–9.87; p = 0.23). T3 disease was more likely to have a nodal disease (15/21 sides) (OR 1.79; 95% CI 0.56–5.67; p = 0.33). More patients in the pCND arm developed transient hypoparathyroidism (14/22 vs 4/17) but all resolved within a year. One patient developed hoarseness alone while three patients reported dysphagia in the pCND arm compared to one patient in the total thyroidectomy arm with dysphagia.

Conclusion: More than half of patients with PTC (<4 cm) have metastatic central compartment nodes. Prophylactic central neck dissection can be safely performed. However, we still lack adequate data on long-term effects.

Thyroid cancer is the most common endocrine malignancy and the eighth-most common cancer in Singaporean female. Recent local epidemiology studies have shown a rise in the age-standardized incidence rate to approximately 9.5/100,000.1 Another local study by Shulin et al. showed that the incidence of papillary thyroid microcarcinoma has risen by 80% over the last few years. Shulin et al. also showed that the incidence of papillary thyroid carcinoma (PTC) larger than 5 cm was only 5%.2 This suggests that patients are presenting earlier with small volume thyroid cancers and therefore undergo surgery early.

According to the American Thyroid Association (ATA), thyroidectomy alone without central compartment neck dissection is sufficient for small (<4 cm) non-invasive PTCs.3 However, the presence of central compartment nodal metastases is a known predictor of poor overall survival outcome and locoregional recurrence.4–6 Numerous studies have shown that prophylactic central neck dissection (pCND) helps to decrease the locoregional recurrence rate. A recent meta-analysis performed by Zhao et al. of 20 studies showed the overall recurrence rate to be significantly lower when pCND was performed in combination with a total thyroidectomy compared to a total thyroidectomy alone (5.9 vs 7.2%) for PTC. The presence and characteristics of the lymph node metastases also help to identify patients that will require radioactive iodine (RAI) therapy as well as the dose required.7–9

Data were collected from our patients from a single institution over 5 years from January 2011 to October 2016. All patients who had undergone either a hemithyroidectomy (primary or completion) or a total thyroidectomy within our center were included. Surgery was performed either by a senior consultant or by a resident under supervision. Patients were excluded if they had had previous ipsilateral neck surgery or radiotherapy to the neck. Patients who did not have postoperative histological confirmation of PTC or who had a tumor size of >4 cm were also excluded. All data were collected retrospectively through a review of both electronic records and outpatient clinic notes. Histology reports of identified patients were reviewed for the presence of central compartment lymph nodes.

Patients with RLN injury were assessed subjectively according to the patient’s perception of hoarseness or dysphagia. Both inpatient and outpatient notes were reviewed for these complaints as well as the need for fluid thickeners or nasogastric tube (NGT) feeding. Patients did not routinely undergo nasoendoscopic evaluation of the vocal cords unless they complained of significant persistent hoarseness or dysphagia at follow-up.

A total of 122 patients had undergone thyroid surgery within our center during the accrual period. Of these, 16 patients were excluded as postoperative histology was either benign, tumor size of >4 cm or showed follicular cancer. As such, 106 patients were recruited for the study with a total of 108 thyroidectomies (2 patients underwent completion thyroidectomy during the accrual period).

Thyroid surgery is usually performed via an open lateral approach in our center. However, five of the patients underwent endoscopic surgery. These five patients all had thyroidectomy alone without CND.

Significant RLN injury rates were low in our study population. None of the patients who had undergone a hemithyroidectomy regardless of CND developed significant symptoms. 1/26 patients in the total thyroidectomy arm had dysphagia requiring NGT feeding. This patient had undergone an emergency total thyroidectomy for airway compression from the goiter. Patients who had received CND had an expected higher rate of symptoms. Of the 51 patients, 1 patient had hoarseness alone while another 3 complained of dysphagia as well. Only one required NGT feeding. None of the symptomatic patients was from the bilateral CND arm. However, one patient from the bilateral CND arm was excluded due to dysphagia from a dense perioperative stroke. 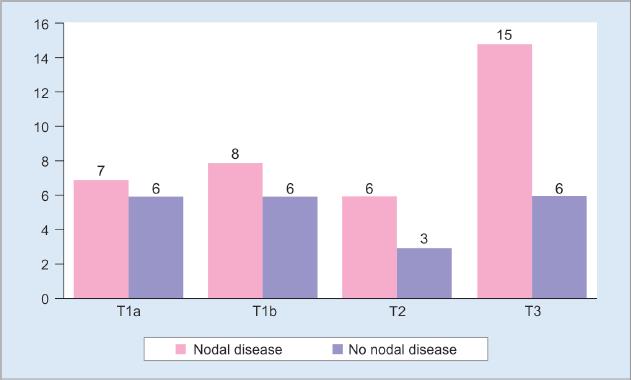 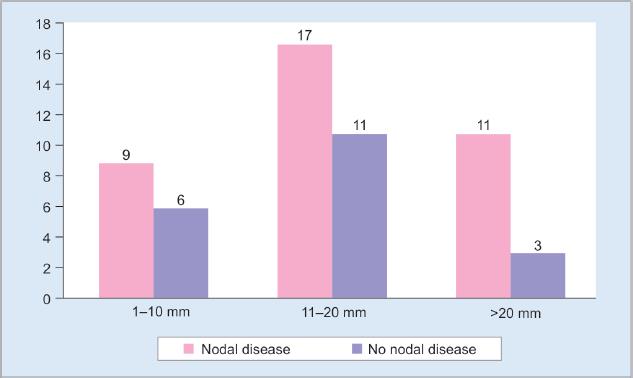 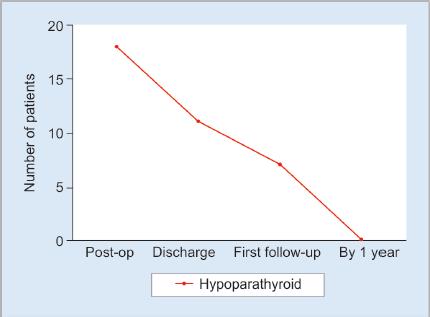 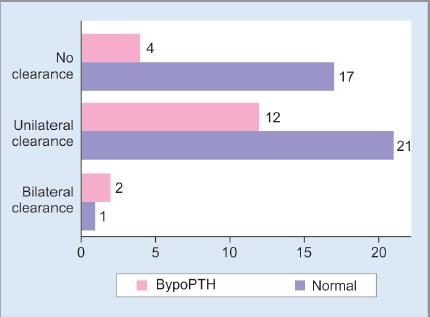 Our study shows that pCND can upstage more than half of the patients from N0 to N1a. This affects the patients by increasing the recurrence risk from low to intermediate. Treatment will also differ in that these patients will require RAI as well as a higher dosage required. The complication rates are comparable with other centers as there were no patients with permanent hypoparathyroidism and only one patient with persistent RLN injury.

Despite the numerous studies available, the role of pCND is still a matter of debate. The ATA recommends thyroidectomy alone without CND in small, non-invasive, clinical N0 tumors. This is because of studies that show that there is no improvement in the long-term patient outcome while exposing the patient to complications.10,11 Conversely, a meta-analysis of 23 studies by Chen et al. looking at pCND for PTC shows a significantly lower locoregional rate recurrence (LRR) (OR 0.65; 95% CI 0.48–0.88; p = 0.006). However, it is important to note that patients who receive pCND and are found to have the nodal disease will also receive RAI treatment. Radioactive iodine treatment has been shown to decrease the LRR and will therefore influence the overall survival.12 This suggests that the difference between patients with total thyroidectomy alone vs with pCND may be more significant than expected as patients with total thyroidectomy alone will have lost a further two modalities of treatment, i.e., lymphatic clearance and RAI treatment. Locoregional rate recurrence would necessitate reoperation and this exposes the patient to an increased risk of permanent RLN (0–5.8%) and hypocalcemia (0–9%) as per a meta-analysis by Shorook et al.13

The main limitation of our study is the small study population. As such, we were unable to obtain any statistically significant results. Within this limitation, we can observe a similar trend found in larger studies.

The incidence of RLN neuropraxia may be higher than documented. There was no objective assessment for vocal cord palsy. Mild hoarseness may not have been adequately documented in the clinical notes. However, significant nerve injury would have also presented as dysphagia. Inpatient and outpatient notes were reviewed for symptoms, the need for fluid thickeners or NGT feeding to increase the pick-up rate.

Our patients are routinely given a follow-up within the first month followed by several follow-ups within the first year pending the need for adjuvant treatment and adequacy of thyroid suppression. Once these are adequate, patients are usually given annual follow-ups to monitor their thyroid suppression as well as the thyroglobulin (Tg) and thyroglobulin antibody (TgAb) levels. The mean follow-up duration was 37 months (1–85). This is not an adequate period to assess for disease-free survival (DFS) as PTC is known to be indolent and may take years before recurrence. This study is therefore not adequate to evaluate the long-term outcome benefits of pCND.

The study shows that the incidence of central compartment nodal disease in small PTC is not low. We acknowledge that although it was not statistically significant, more than half of our patients were found to have nodal metastases following pCND. A thorough discussion should still be had with the patient concerning treatment choice, as the complication rates for pCND are acceptable.