Background and aim: To investigate whether preoperative contrast-enhanced computed tomography (CECT) will be able to differentiate benign adrenal mass from malignant mass by applying a combination of morphological criteria and correlating it with the final histopathology.

Materials and methods: Thirty-six patients planned for surgery were assessed preoperatively with CECT abdomen and based on CT findings a score of 0 to 6 was given depending on the size of the lesion, margin, density, abutment/infiltration to surrounding structures, necrosis, and calcification which was further correlated with their final histopathology.

Adrenal tumors have always been under the horizon of surgeon’s fascinations. Being suprarenal in location, and surrounded by many vital structures like kidney, liver, and inferior vena cava; surgical planning of adrenal tumors has always been a challenge. Successful adrenal surgery often demands a prior accurate clinical diagnosis and road map to plan the surgical approach and anticipate intraoperative difficulties.

Adrenal gland lesions are seen with a wide range of clinical scenarios due to the variety of hormones secreted by the glands. Expert knowledge of such classical clinical presentations and their pathological hormonal milieu associated with various adrenal gland neoplasms gives an extra edge to endocrine surgeons. Mostly adrenal gland neoplasms secrete hormones and are thus overtly functional (e.g., secondary hypertension in pheochromocytoma, Cushing’s syndrome, Conn’s adenoma), whereas, on the other end of the spectrum, non-functional adrenal masses are usually discovered otherwise as incidentalomas (adenoma, metastases).

Clinical manifestations of hormonal hypersecretion like hypertension, Cushingnoid habitus—a classical feature of many benign adrenal lesions such as pheochromocytoma and Cushing’s adenoma, respectively; may also be seen in malignant pheochromocytoma or adrenocortical carcinoma (ACC). The non-functional adrenal adenomas constitute about 75% of adrenal incidentalomas, a high proportion (40–60%) reflects metastatic disease in the oncological population.1–3 Prognosis and management depend on the presence or absence of malignancy.

Interpretation of findings on contrast-enhanced computed tomography (CECT) and MRI abdomen are areas of focus as a roadmap in surgical planning among surgeons. Though scientists across the globe are working hard to devise modalities to preoperatively detect/suspect malignancy in adrenal lesions; still it is very difficult to confirm malignancy on radiology criteria alone. In the last 25 years, the imaging and treatment of adrenal gland pathology have been the focus of intensive study and controversy along with the use of cross-sectional imaging modalities as a key component of clinical care. To prevent more costly tests (FDG-PET) or invasive procedures (biopsies), as many patients as possible must be diagnosed on findings of the CT adrenal mass. Therefore, we aim to investigate whether preoperative CECT will be able to differentiate benign adrenal mass from the malignant mass by applying a combination of morphological criteria and correlating it with the final histopathology.

This is a retrospective study and the patient data were collected from the hospital records in the Departments of Endocrine Surgery and Pathology, King George Medical University Lucknow, India. The study period included all patients with adrenal masses planned for surgery between January 2017 and March 2020.

All patients planned for surgery were assessed preoperatively with CECT and on the basis of CT finding, a score of 0 to 6 was given depending on the size of the lesion (0 = %3C; 6 cm, 1 = ≥ 6 cm), margin (0 = well-defined, 1 = ill-defined), density (0 = homogeneous, 1 = heterogeneous), abutment/infiltration to surrounding structures (0 = no abutment, 1 = abutment), necrosis (0 = no necrosis, 1 = presence of necrosis), and calcification (0 = no calcification, 1 = presence of calcification) (Figs 1 and 2). The added score (0–6) was then correlated with the final histopathology. Hypothesis was that higher the score, higher the chance of malignancy.

Data were analyzed and reported as the mean ± SD for continuous variables and frequency (percentage) for categorical variables. The statistical analysis was performed using an unpaired t-test. Significance was set at p value < 0.05 and receiver operator characteristic (ROC) curve was used to check sensitivity, specificity, positive predictive value (PPV), and negative predictive value (NPV) of each cut-off score.

The presence of abutment to the surrounding structure, ill-defined margins, and necrosis on CECT was found significantly more in patients with malignant adrenal mass as compared to those with benign lesion but no significant difference was found based on the size of the lesion, density, and margins (Table 2). 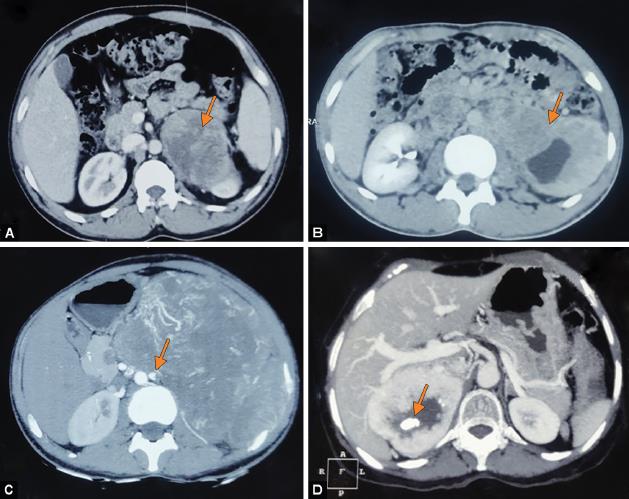 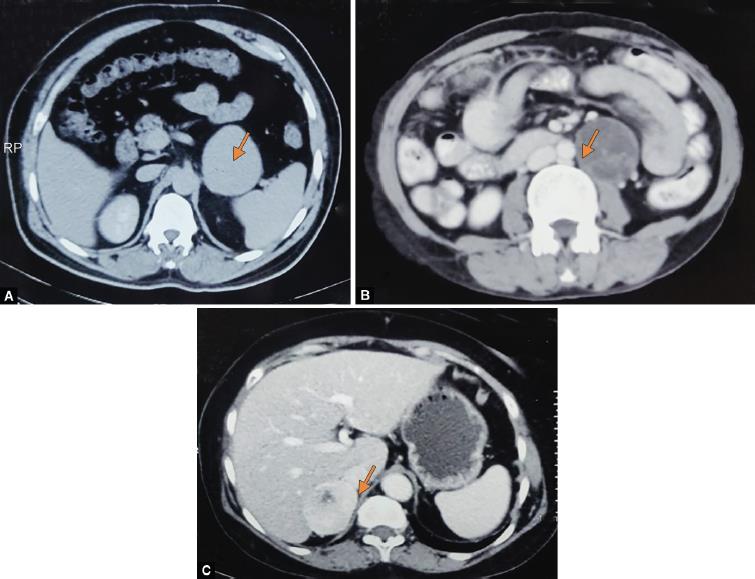 Though different morphological features of adrenal CT imaging have been studied extensively in different adrenal pathologies; most of them are performed on “Unenhanced CT”, still there is very limited data over scoring criteria that accurately distinguish between benign and malignant adrenal masses on CECT imaging.4

Our analysis aimed to test six different morphological parameters of CECT (size, margins, abutment, necrosis, calcification, and homogeneity) to improve the accuracy of the diagnosis. We found four parameters heterogeneity, margins, abutment, and necrosis as the most distinct features differentiating malignant adrenal masses from benign ones.

Gufler et al. described similar scoring criteria to differentiate among adenoma and adrenal metastasis that combined four parameters—size, contour, homogeneity, and density.5 As a contrasting point from our study, Gufler et al. analyzed unenhanced CT scans of 56 patients with an adrenal mass and a history of an extra-adrenal malignancy—24 were adenomas and 32 were found to be metastases.5 So, their model was altogether different from ours where we studied only primary benign and malignant masses of adrenal. Among other models, PET is extremely productive in differentiating benign and malignant adrenal lesions with sensitivity and specificity of 94 and 100%, respectively.6

While considering individual imaging parameters, the size of the adrenal lesion has been one of the most unique criteria of all. Many adrenal incidentaloma treatment guidelines are still focused on the size of the adrenal mass.7–9 The size has some prescient worth; be that as it may, as most adenomas are under 4 cm, while ACCs have a median size of 11 cm.10 Quite contrasting with this; mean tumor size on CT was 6.5 ± 2.7 cm in our study. Solely taking a cut-off of 6 cm would miss 25% of our ACC lesions. This may be because on taking 6 cm as the cut-off for scoring, only 6 out of 8 malignant adrenal masses (75%) had size > 6 cm; while benign adrenal masses were equally distributed on either side of the 6 cm cut-off mark. Hence, the difference among both pathologies was not significant. Considering size alone as a single parameter and 6 cm as a cut-off, increases our sensitivity (75%) and NPV (87.5%) to a fairly good level. Since almost half of the benign adrenal masses enrolled are non-functional—that may be a reason for the delay in presentation, final therapeutic management, and thereby resulting in low recorded specificity and PPV. 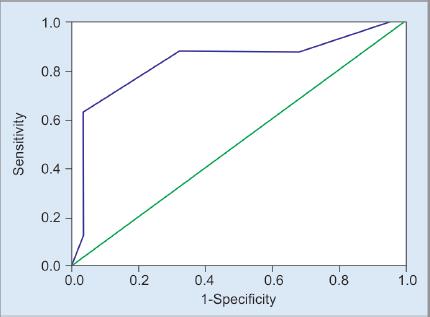 Benign adrenal tumors have no particular morphological highlights and most have distinguished margins all around.11 The presence of poorly characterized margins is frequently a predictor of the more aggressive nature of ACCs. Also, ACCs are characterized by irregular, large, locally invasive heterogeneous lesions with necrosis and calcifications in up to 30% of cases on CECT.12 Nevertheless, the analysis of tumor margin, abutment, and necrosis, yielded statistically significant results to differentiate adrenal tumors in our series, and may therefore add to the interpretation of the CT in an individual case. Twenty-seven out of 28 benign tumors were recorded to have well-defined margins on CT—thus margins on CT in our study derived the highest specificity (97.4%) and PPV (80%) among all the factors and reasonably high NPV (87.1%) as well. Though almost as much as 50% of malignant adrenal masses were observed to have well-defined margins thereby resulting in decreased sensitivity. Due to certain characteristic pathological features like high mitotic activity, capsular invasion, and permeation of vascular spaces; ACCs tend to show abutment and local invasion on CT scans. In our study, abutment feature was observed not only in three-fourth of the malignant adrenal masses but also in almost one-fifth of benign lesions as well. The abutment feature was thus studied to have appreciably high NPV (91.7%), specificity (78.6%), and sensitivity (75%). Malignant tumors particularly ACCs are known to have central areas of cystic necrosis and cystic degeneration.13 We recorded a high NPV (91.7%), specificity (78.6%), and sensitivity (75%) for necrosis in our study. Necrosis was also found in almost one-fifth of the benign adrenal masses, almost all of them were pheochromocytoma—tumors that are also known to have necrotic areas—maybe this could explain a lower PPV of 50%.

Calcifications are also among salient features of adrenal CT morphology. Being non-specific for any pathology; calcifications play an only minor role in supporting the radiological or pathological diagnosis for adrenal disorders. As far as malignant adrenal masses are concerned, irregular calcifications can be seen up to slightly less than one-third of ACCs and metastases.13 Among benign adrenal tumors, egg-shell calcification is a typical feature of an adrenal teratoma; 20% of ganglioneuroma may show punctate or discrete calcifications. Other non-specific calcifications are observed in adrenal hemangioma and pheochromocytoma. These findings reveal that calcifications are poorly associated with any specific etiopathogenesis. The same is depicted in our study with poor sensitivity and specificity. Neither did we find any significant difference in the occurrence of calcification in either disorder.

Malignant tumors like ACC are characterized with heterogeneous attenuation at unenhanced CT of %3E;10 HU. Upon contrast enhancement CT scans, ACCs reflect a classical heterogeneous enhancement with a peripheral predominance.12–15 Nevertheless, derived statistically insignificant it was important to note that in our study none of the malignant tumors were observed to have homogeneous enhancement—this implies in recording highest sensitivity and NPV of 100% each. Though it was also seen as a radiological feature of >82% of benign tumors and henceforth resulting in poor specificity and PPV. More than half tumors of our benign tumor population were pheochromocytoma, paraganglioma, and myelolipoma. Pheochromocytoma and paraganglioma are known to have classical enhancement on CT scans which may be heterogeneous due to necrotic elements. Myeloid elements in myelolipoma may show some degree of enhancement among otherwise predominant fatty tissue of specific imaging characteristics with the attenuation <0 HU, sometimes < −50 to –70 HU on pre-contrast CT images.13 Other benign tumor-like cysts rarely may have few heterogeneous elements on CT scans.

Being a retrospective study, it has its own limitations. Henceforth, we recommend further prospective studies with a large sample size for better results.