Hyponatremia is commonly seen after pituitary surgery. It generally occurs within the first week after surgery and is usually moderate and asymptomatic. However, it may be severe and prolonged in some cases. Different etiologies can explain this hyponatremia. The syndrome of inappropriate antidiuretic hormone secretion (SIADH) is one of the most common etiologies, but other differential diagnoses must be ruled out before making this diagnosis. In this article, we present a case of prolonged hyponatremia caused by SIADH occurring after transsphenoidal surgery for a non-functioning pituitary macroadenoma. We revise the different etiologies of hyponatremia following pituitary surgery and their treatment.

A 45-year-old woman was referred from the neurosurgery department to the endocrinology department for prolonged hyponatremia following pituitary surgery. She underwent an endoscopic transsphenoidal surgery 1 month earlier for a non-functioning pituitary macroadenoma revealed by an optochiasmatic syndrome and secondary amenorrhea. The patient developed an acute and persistent postoperative hyponatremia which was initially attributed to a secondary adrenocortical insufficiency. She was treated with high doses of hydrocortisone and isotonic saline infusion without improvement of her hyponatremia which reached a nadir in the eleventh postoperative day (Fig. 1).

On admission, the patient was complaining of persistent headaches. The physical examination found a weight of 55 kg (stable), a lying and standing blood pressure at 120/80 mm Hg, a heart rate of 80 beats/minute. No symptoms of volume depletion were present. Laboratory tests showed hyponatremia (Na+: 122 mmol/L) with low plasmatic osmolality (256 mOsmol/L) and elevated natriuresis (78 mmol/24 hours). Serum urea, albumin, and hematocrit levels were normal. The thyroid function was normal on 50 μg of L-thyroxine. The diagnosis of SIADH was held and the patient was put on water restriction (500 mL/day). Sodium level increased progressively reaching normal level the fifth day of water restriction (Fig. 1). 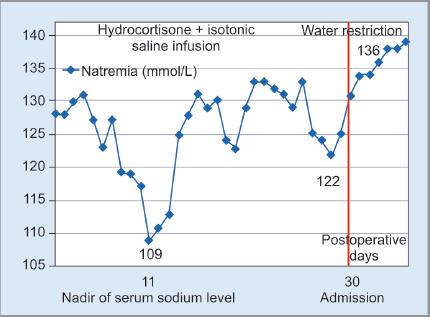 Prevalence and Time to Onset of Hyponatremia after Pituitary Surgery

Hyponatremia is a common complication of pituitary surgery. It occurs in 16–38% of patients.4–8 Fisher described a classic triphasic trend of hydroelectrolytic disturbances after pituitary surgery in which the first phase of central DI is initially observed, followed by a phase of transient hyponatremia related to SIADH 1 week later and a final phase of permanent or transient central DI. This classic triphasic evolution is actually observed in only 1–2% of cases.9 Hyponatremia usually occurs between the fifth and ninth day after surgery but it can also appear earlier in the first 24 hours or later when the patient has been discharged.4–6 Hence, there is a need to educate the patient about the signs of hyponatremia and advice consult if symptoms appear. In the reported case, the patient developed hyponatremia on the first postoperative day, which progressively worsened and reached a nadir (Na+ = 109 mEq/L) on the 11th day postoperatively. This hyponatremia persisted for >30 days after the surgery.

Severity and Clinical Manifestations of Hyponatremia

The clinical manifestations of hyponatremia depend on its severity and its speed of development. Most often this hyponatremia is asymptomatic resolving spontaneously within a few days. It can therefore go unnoticed. Hyponatremia becomes symptomatic if it is deep (<120 mmol/L) and in case of rapid onset (<48 hours). Symptoms reflect the cerebral edema due to plasmatic hypoosmolality: headache, nausea, vomiting, abdominal pain, malaise, agitation, confusion, coma, etc.12 In the case reported it manifested only by headache.

Syndrome of inappropriate secretion of antidiuretic hormone and cerebral salt-wasting syndrome (CSWS) are the main causes of hyponatremia following pituitary surgery, but hyponatremia can also be related to adrenocortical insufficiency or hypothyroidism. Hyponatremia may also be caused by an overload of hypotonic solutions received during the perioperative period or by high doses of desmopressin acetate given during the stage of DI (Fig. 2). After having ruled out these two latter iatrogenic causes of hyponatremia and correctly substituted the eventual corticotropin and thyrotropin deficiencies, distinguishing between the diagnoses of SIADH and CSWS can be difficult because these two entities have many clinical and biological similarities. However, it is essential to differentiate between these two disorders because the management of hyponatremia is different.4,8,13–16

Surgical manipulation of the posterior pituitary induces a release of ADH. As the serum osmolality and blood volume are normal, this secretion of ADH is considered inappropriate. This results in water retention and expansion of extracellular volume which induces an increase in glomerular filtration rate with a decrease in renal sodium reabsorption. Hence, urinary sodium excretion is increased and the blood volume remains normal or slightly incre-ased.4,10,12,17,18 Syndrome of inappropriate secretion of antidiuretic hormone is therefore characterized by hyponatremia associated with hypernatriuresis and normal or slightly increased blood volume (Fig. 3).

Syndrome of inappropriate secretion of antidiuretic hormone diagnosis is based on Barter and Schwartz criteria (Table 1).

Cerebral salt-wasting syndrome is a volume-depleted state caused by excessive natriuresis occurring in patients with intracranial disease that leads to hyponatremia.19 This syndrome is also involved in many hyponatremias occurring after pituitary surgery.4,13,19,20 The pathophysiology of this disorder remains unclear but hypotheses incriminate some natriuretic factors such as atrial natriuretic peptide (ANP), brain natriuretic peptide (BNP), C-type natriuretic peptide, and ouabain-like peptide (OLP) associated with decreased sympathetic input to the kidney. These natriuretic factors reduce effective blood volume by increasing natriuresis. This volume depletion stimulates ADH secretion but this secretion is not considered inappropriate as in SIADH.7,12–14,17,20 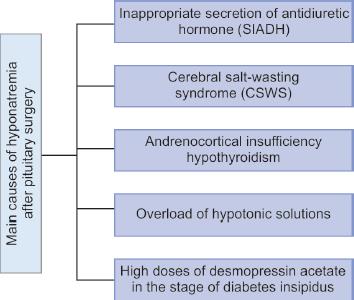 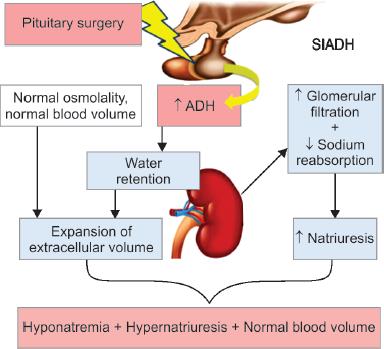 The decrease in the activity of the sympathetic nervous system at the renal level increases the hypernatriuresis by direct and indirect action via a decrease in the activity of the renin-angiotensin-aldosterone system despite hypovolemia. Cerebral salt-wasting syndrome is therefore characterized by hyponatremia associated with hypernatriuresis and hypovolemia (Fig. 4).

Differential Diagnosis between SIADH and CSWS 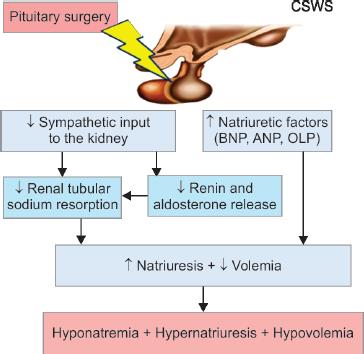 In the reported case, the diagnosis of SIADH was based on the absence of clinical and biological signs of extracellular volume depletion (stable weight, normal heart rate, absence of orthostatic hypotension, low serum osmolality, normal serum urea, albumin, and hematocrit levels) and the normalization of serum sodium after water restriction.

The management of hyponatremia occurring in the context of pituitary surgery includes:

It should not be forgotten that a too rapid correction of hyponatremia may be complicated by osmotic demyelination, which prognosis is often severe. Thus, asymptomatic and chronic hyponatremia (onset > 48 hours) higher than 115 mmol/L is not a therapeutic emergency. Only acute and poorly tolerated hyponatremia with neurological signs should be immediately corrected in a neurosurgical intensive care unit. In this case, it is necessary to rapidly increase the natremia with hypertonic saline solution (at 3%) to reduce cerebral edema and prevent cerebral engagement.18 However, in chronic and well-tolerated hyponatremia, it is essential to distinguish between SIADH and CSWS before treating.4,6,15 As the pathophysiology in SIADH lies in inappropriate reabsorption of free water, the gold standard treatment for SIADH consists of fluid restriction.4,18 In contrast, CSWS treatment is salt and fluid replacement. Either isotonic or hypertonic saline solutions are effective.7,23 In SIADH, the fluid restriction rate depends on sodium concentration. Casulari et al. have suggested the following rates according to serum sodium levels: %3C;1,200 mL/day if the natremia is between 130 and 134 mEq/L, <800 mL/day between 126 and 130 mEq/L, and < 600 mL/day if natremia is under 125 mEq/L.22 Fluid intake was limited to 500 mL/day in the reported case. In CSWS, sodium replacement can be performed by an infusion of physiological saline solution (0.9%) if the natremia is between 125 and 130 mEq/L and by hypertonic saline solution if the natremia is under 120 mEq/L. Chronic hyponatremia should not be corrected by %3E;10 mEq/day to avoid osmotic centropontine demyelination and treatment is not required if natremia is >130 mEq/L.4,18 Fluid restriction may worsen hyponatremia in patients with CSWS. It is therefore essential to make the correct diagnosis before starting the treatment.4,13,14,18,20

Hyponatremia is commonly observed after pituitary surgery. It usually occurs within the first week after surgery and is usually moderate and asymptomatic. However, it may be severe in some cases and may occur after the patient has been discharged justifying the importance of educating the patient about the clinical signs of hyponatremia. The management depends on the etiology and must take into account the severity and speed of onset of hyponatremia. Acute, severe, and symptomatic hyponatremia is a life-threatening emergency that must be managed in a neurosurgical intensive care unit. Chronic hyponatremia must be corrected slowly to avoid osmotic demyelination syndrome. After having ruled out the iatrogenic causes of hyponatremia and correctly substituted the eventual corticotropin and thyrotropin deficiencies, distinguishing between the diagnoses of SIADH and CSWS is crucial for determining the appropriate treatment. Water restriction is indicated in the case of SIADH and slow saline infusion in the case of CSWS.

The patient gave her written consent for the data used in the manuscript.