Aim: This case report highlights the importance of preoperative imaging and the clinical considerations a surgeon must have intraoperatively while searching for an ectopic parathyroid adenoma.

Background: Primary hyperparathyroidism is a disorder of autonomous function of either one or multiple parathyroid glands. Definitive treatment requires resection of the autonomous gland. Resection at the initial operation is important as reoperative patients are at a higher risk of having complications. Ectopic locations of parathyroid glands are common with a reported incidence of 6–22%. Due to the greater embryonic migration distance of the inferior parathyroid glands, they have greater anatomic variation compared to the superior glands and are often more difficult to identify. True intrathyroidal parathyroid adenomas are a rare subset of ectopic parathyroids that must be considered when a parathyroid adenoma cannot be identified.

Case: A rare case of a completely intrathyroidal parathyroid adenoma in a patient with a previously failed cervical neck exploration.

Conclusion: This case demonstrates that in the setting of inconclusive imaging, one’s clinical acumen, and anatomical and embryologic knowledge must be utilized in a systematic approach to identifying parathyroid adenomas. After other ectopic locations are excluded, a thyroid lobectomy should be considered to treat a completely intrathyroidal parathyroid adenoma.

Clinical significance: Anatomical variation should always be accounted for when faced with a missing parathyroid gland.

Primary hyperparathyroidism (1°HPTH), a disorder of autonomous function of either one or multiple glands, is classically associated with inappropriately elevated calcium and parathyroid hormone (PTH) levels. Definitive treatment of 1°HPTH requires surgical intervention, with resection of the autonomous gland(s), or resection of 3.5 glands in cases of uniform parathyroid enlargement. Diagnostic imaging is useful before cervical exploration with parathyroidectomy to attempt to localize the abnormal glands, including those found in ectopic locations. Some commonly utilized modalities include ultrasound (US), technetium 99m (Tc 99m) sestamibi scintigraphy (MIBI) with single-photon emission computed tomography (SPECT), SPECT/CT (MIBI SPECT fused with CT imaging), or parathyroid four-dimensional (4D) CT. When there is a concern for an ectopic parathyroid adenoma, surgeons need to utilize imaging and their knowledge of parathyroid embryology to systematically assess each potential ectopic location to identify the abnormal parathyroid gland and thus avoid future reoperative surgery.

Anatomic variations of parathyroid location occur when there is aberrant migration of the glands away from their normal anatomic locations. The prevalence and anatomical locations of ectopic glands have been well documented in the literature, with studies demonstrating an incidence of 6–22%.1,3–7 Ectopic superior glands are commonly found retroesophageal or within the tracheoesophageal groove, with rare occurrences in the posterior mediastinum and intrathyroidal parenchyma.1–4,6 Due to the greater embryonic migration distance and their common migration with the thymic gland, inferior parathyroid glands have greater anatomic variation. They can commonly be found either intrathymic, within the anterior mediastinum or within the thyrothymic ligament.1,3,4,6 Submandibular (due to lack of descension) and intrathyroidal inferior parathyroids are also known variations, though to a less extent.1–4 The following case illustrates the treatment of 1°HPTH in a patient with a previously failed parathyroidectomy due to a missed intrathyroidal parathyroid adenoma.

A 66-year-old woman with a past medical history of 1°HPTH presented to the clinic with persistent symptomatic hypercalcemia. The patient’s labs had noted hypercalcemia for the last 5–6 years, and she endorsed symptoms of urinary frequency, constipation, dyspepsia, and right knee and ankle discomfort. The patient denied any history of nephrolithiasis or bone fractures, however, a previous DEXA bone density study revealed osteopenia. Initial imaging at an outside hospital (OSH) with the US demonstrated a subcentimeter right thyroid lobe nodule and no extrathyroidal nodules suspicious for parathyroid glands. Subsequent MIBI-SPECT/CT imaging demonstrated delayed washout within the right thyroid lobe, however, the radiologic report read negative for parathyroid disease. The patient underwent right neck exploration for 1°HPTH at an OSH and, despite extensive right cervical dissection, no enlarged parathyroid tissue was identified. The left neck was not explored during the procedure due to concerns of right recurrent laryngeal nerve injury. The patient subsequently underwent a direct laryngoscopy that confirmed the right vocal cord paresis.

Labs obtained before the clinic visit were significant for elevated calcium of 10.6 and a PTH level of 106, confirming persistent primary hyperparathyroidism. Repeat imaging was performed, including US (Fig. 1) and MIBI-SPECT/CT (Fig. 2). The US re-demonstrated a subcentimeter right lower pole hypoechoic thyroid nodule and the MIBI-SPECT/CT noted a delayed washout of contrast within the right lower thyroid in the vicinity of the nodule. Once again, imaging was read as negative for parathyroid disease on the radiologic report. However, the delayed wash-out on MIBI imaging was concerning to the surgery team for intrathyroidal parathyroid disease. Treatment options were discussed, and the patient elected for cervical re-exploration with subtotal parathyroidectomy and possible subtotal thyroidectomy. The patient underwent a repeat direct laryngoscopy before the surgery and the right vocal cord paresis had completely resolved. 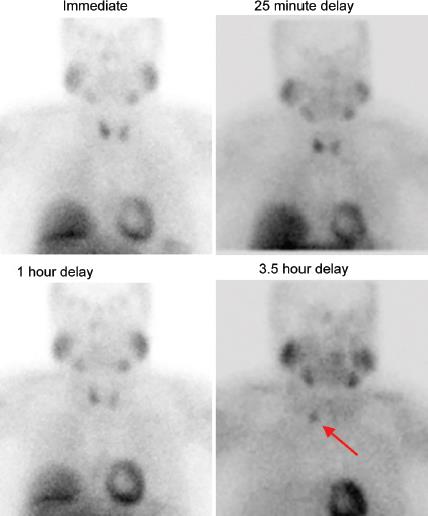 The patient was placed in a modified Fowler position, and a transverse cervical curvilinear incision was made. The right neck was initially approached due to the findings noted on previous imaging. Operative findings were significant for extensive scarring secondary to the previous surgery. The right superior parathyroid was identified in its normal anatomic location and was noted to be of normal size. The right inferior parathyroid was not observed in its normal location or the typical ectopic locations. Therefore, a right thyroid lobectomy was performed and gross examination revealed a rare completely intrathyroidal parathyroid gland (Fig. 3). This finding was confirmed using an intraoperative frozen section. Intraoperative PTH levels demonstrated a significant drop from 241 to 16 pg/mL after the procedure. Postoperatively, the patient recovered without complication and the serum calcium returned to within the normal range. 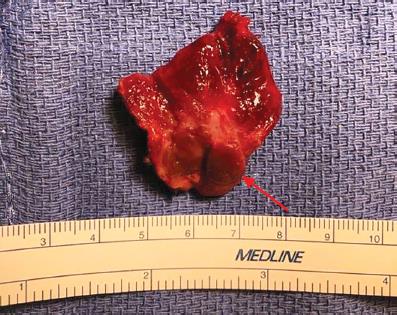 For our study, preoperative imaging with US and MIBI-SPECT/CT was utilized. Given the previously failed cervical procedure with recurrent laryngeal nerve injury, appropriate identification of abnormal adenoma location was key to reduce the risk of complications. Ultrasound and MIBI-SPECT/CT imaging identified a 1 cm hypodense mass located in the right inferior thyroid lobe, with delayed washout of the tracer. Interpretation by the radiologist suggested no presence of parathyroid disease, but rather imaging consistent with a thyroid nodule. Fine needle aspiration (FNA) of the thyroidal mass was considered with washing for PTH; however, this was not performed due to its small size and risks associated with parathyroid biopsy, including lesion disruption and secondary parathyroid adenomas secondary to seeding along the needle tract.14–17

A meta-analysis conducted by Cheung et al. assessed the accuracy of preoperative imaging on localization of parathyroid adenomas compared to intraoperative findings.18 Pooled analysis indicated that the US had a sensitivity of 76.1% (57–89%), followed by MIBI-SPECT 79% (49–91%) and 4DCT (89%).18 Data related to MIBI-SPECT/CT were not presented, though SPECT/CT is considered to have a greater localization value than SPECT alone for ectopic adenomas.19 Conversely, the positive predictive value of parathyroid adenomas noted on imaging is similar across each test, with 4DCT having the highest PPV of 93.5%, followed by US (93.2%; 85–100%) and MIBI scans (91%; 84–96%).18 Furthermore, a retrospective study by Roy et al. found similar results while assessing the sensitivity and PPV of MIBI scans alone and the US in the identification of ectopic parathyroid adenomas.7 Overall results determined MIBI imaging to have an overall sensitivity and PPV of 89 and 90%, respectively, while the US demonstrated a sensitivity and PPV of 59 and 90%, respectively.7 While assessing for intrathyroidal parathyroid adenomas only, the sensitivity of MIBI scans and the US was 78 and 83%, respectively.7 The greater sensitivity of US with intrathyroidal parathyroid adenomas could be related to accessibility with the US probe, while other ectopic locations including the thymus (48% sensitivity) or retroesophageal sites (58% sensitivity) are much more difficult to image.7 Conversely, [99mTc]Tc-Sestamibi tracer uptake within thyroid nodules is documented within the literature,20 which can lead to misinterpretation of thyroid nodules as parathyroid disease, and vice versa. This case report demonstrated the presence of a subcentimeter thyroid nodule on the US along with delayed [99mTc] Tc-Sestamibi tracer washout, read as thyroidal nodularity on the radiologic report. In these instances, it is imperative that a surgeon creates their own interpretation of the data and considers the full clinical picture. 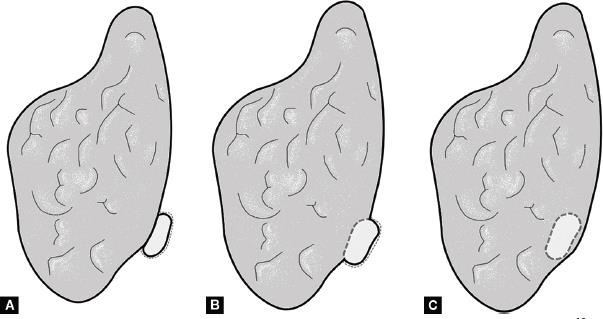 In conclusion, this is a case that demonstrates the treatment of 1°HPTH in a patient found to have an intrathyroidal parathyroid adenoma on reoperative cervical exploration. These findings demonstrate that in the setting of inconclusive imaging, one’s clinical acumen and anatomical and embryologic knowledge should be utilized in a systematic approach to identifying parathyroid adenomas. Though rare, anatomical anomalies do exist, and should always be accounted for when faced with a missing parathyroid gland.