Aim and objective: Papillary thyroid carcinoma (PTC) constitutes 80% of thyroid cancer cases. It has a high risk for lymph node metastases in both central and lateral compartments of the neck. This study is an attempt to better define the need for level V dissection in PTC, possible predictors of involvement, and rate of complications.

Materials and methods: In the General Surgery Department, Minia University Hospital, Egypt, 35 patients diagnosed with PTC were subjected to lateral neck dissection (LND) in the period from October 2015 till January 2019. In LND, we spared the internal jugular vein, spinal accessory nerve, and sternocleidomastoid muscle. All neck specimens were intraoperatively labeled by level for the pathologist.

Conclusion: In experienced hands, including level V leads to better local control without a high rate of complications. We concluded that formal modified radical neck dissection (MRND) is necessary to reduce the morbidity of reoperation surgery in PTC.

Well-differentiated thyroid carcinoma (WDTC) is the most common endocrine malignancy regardless of ethnicity or of geographic location.1 Papillary thyroid carcinoma (PTC) constitutes approximately 80% of all thyroid cancer cases2 and the incidence is on the rise.3

In general, WDTC has a high and well-known propensity to spread to lymph nodes in the neck, in both the central and lateral compartments.4

Although the pattern of lymphatic spread is well known, the impact of nodal metastases on survival is still a controversial issue,5 even though current staging systems consider nodal metastases to confer a poorer prognosis, particularly in older patients.6

Relatively good prognosis of patients with WDTC, the unclear prognostic value of nodal disease,7 and possible complications related to neck dissection (neural damage, shoulder syndrome, chylous leak, and hemorrhage),5,8 are all factors contributing to the lack of clear indications for management of node-positive patients.

The neck levels to be removed in neck dissection for WDTC is one of the most debated issues; particular emphasis has been placed on levels I, V, and sublevel IIb.9

This prospective study explores the debate about level V lateral neck dissection (LND) in fine-needle aspiration (FNA)-proven PTC. Our work is an attempt to better define the need for level V dissection in PTC, analyzing the distribution of metastatic nodes in each subdivision, possible predictors of involvement, and rate of complications.

A total number of 35 patients with PTC subjected to LND surgery (levels II, III, IV, Va, and Vb) were enrolled in this study. Surgery was done in the General Surgery Department, Minia University Hospital, Egypt in the period from October 2015 until January 2019 after approval of the institutional board of ethics. Unilateral neck dissection was done in 18 patients. Seventeen patients underwent bilateral dissection (each neck side is considered as one specimen) so the total number of specimens is 52. Fully informed consent was taken from the patients before commencement.

The following inclusion and exclusion criteria were enrolled. The inclusion criteria were: pathologically proven PTC, evidence of lateral lymph node metastasis by histopathological examination, primary cases needing simultaneous total thyroidectomy and neck dissection, and cases presenting with lateral neck disease after the previous thyroidectomy. Cases with less than a selective neck dissection of levels II through V, an incomplete pathology report, pathologic features other than PTC, distant metastasis, or a history of LND were excluded from this study. Central neck tissue (level VI) was not included in our study.

Preoperative physical examination, high-quality thyroid ultrasonography (US), and US-guided FNA of the primary tumor and the suspicious lymph nodes were done to all patients.

Demographic and operative data of all patients included age (whether less or more than 55 years), sex, whether neck dissection with total thyroidectomy or previous thyroidectomy, unilateral or bilateral dissection.

Pathological data recorded (in the 52 specimens) include pathological tumor type, tumor diameter (less or more than 1 cm), extrathyroidal extension (ETE) including gross and microscopic extension, lymphovascular invasion, and incidence of lymph node metastases in level II, III, IV and level V, Va, Vb for each side (a bilateral case is considered as two specimens). Incidence of surgical complications common in level V dissection was recorded including chylous leak and spinal accessory nerve injury presenting as “shoulder syndrome” in the form of pain, limited abduction of the shoulder, full passive range of motion, and anatomical deformities such as scapular flaring, droop, and protraction.

We classified the age as above or below 55 years as this age is widely used as a clinical marker for prognosis. Also, the tumor size less or more than 1 cm as the global definition of microcarcinoma is above that size. 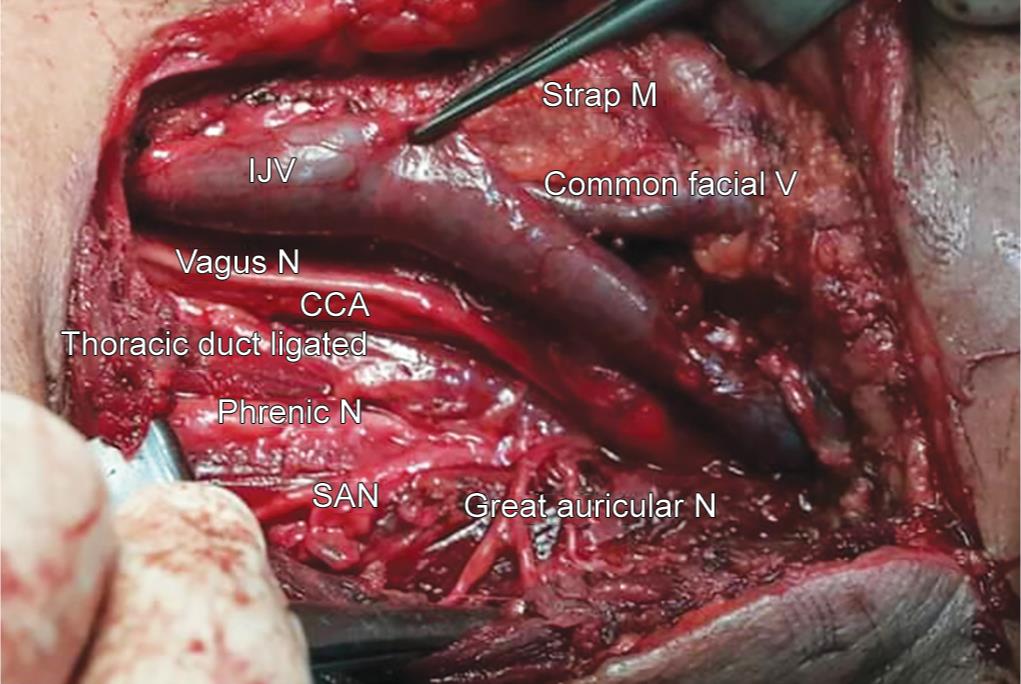 The collected data were coded, tabulated, and statistically analyzed using SPSS program (Statistical Package for Social Sciences) software version 25. Descriptive statistics were done for categorical data by number and percentage. Analyses were done for qualitative data using the Chi-square test (if %3C;20% of cells have expected number per cell <5) or Fisher’s exact test (if %3E;20% of cells have expected number per cell <5). Simple logistic regression analysis for prediction of total level V metastases. The level of significance was taken at p value < 0.05.

Regarding the characteristics of specimens (presented in Table 2), PTC was shown in 80% of specimens, follicular variant in 11.4%, and other types of papillary carcinoma in 8.6%.

Postoperative complications during level V dissection (presented in Table 3) included injury of the spinal accessory nerve (one case; 1.9%) and chylous leak (one case; 1.9%).

During our study, no significant relation was detected between patient characteristics (including age, sex, and cell pathology) and total level V metastases (Table 4).

In addition, some authors supposed that it was difficult to distinguish metastatic lymph nodes in level V by physical examination, US, and even CT scan and that it might lead to local recurrence by LND.12,13 Therefore, the authors emphasized that comprehensive LND including level II–V was necessary and vital for N1b patients with PTC.

However, some recent studies have opposed extensive LND since it has the potential for increased morbidity, such as spinal accessory nerve injury, and no significant benefit of survival compared with selective neck dissection (SND).14 A study by Xu et al.15 showed that the 5-year ipsilateral regional recurrence rate was 8% and 9% with selective and comprehensive dissection, respectively (p = 0.89), and concluded that the extent of neck dissection did not predict the probability of regional recurrence in PTC patients presenting with lateral neck metastases. Thus, the dilemma regarding the proper extent of LND, especially whether level V should be routinely dissected, remains to be solved.

All cases with level V metastases had level Vb metastases except three specimens having metastases also in level Va (5.8%) that means there were no skip metastases. This is consistent with a meta-analysis by Eskander and co-workers17 that reported level V metastatic disease in 25.3% of cases, with Va and Vb nodal positivity in 7.9 and 21.5% of patients, respectively. This evidence leads them to recommend a comprehensive selective neck dissection of levels IIa, IIb, III, IV, and Vb in patients with lateral neck disease from PTC.

The evidence for level Va is lacking, as most studies did not distinguish between levels Va and Vb, and the border between the two levels was inconsistent. Future studies will need to address these sublevels separately.17

The overall rates of metastases in Level III were more frequent than level IV and level II (80.8%, 67.3, and 51.9%, respectively). Such high rates of metastases for these three compartments (levels II, III, and IV) were more frequent than level V which is in line with a previous study by Yanir and Doweck.18 Therefore, comprehensive dissection of levels II–IV is necessary for N1b PTC patients.

Significant shoulder disability after comprehensive neck dissection including levels IIb and V occurs in up to 40% of patients, although much of this may be temporary.15 In our study, we had one case (1.9%) of spinal accessory nerve injury during level V dissection. A chylous leak in the neck is a very rare complication after a thyroidectomy. The risk of this complication increases when the thyroid surgery is associated with neck dissection (5.1% after total thyroidectomy and LND on one side, 6.2% after total thyroidectomy, and LND on both sides).16 Only one of our cases (1.9%) had a chylous leak.

Our study had some limitations in the term of sample size. We presented a relatively small number of patients and further clinical studies in the same topic with a larger population are still needed.

This study indicates that level V metastases in patients with PTC are significant especially in level Vb. The desire to avoid level V dissection can put those patients at increased risk for persistent and recurrent disease, which adds to long-term morbidity. In experienced hands, including level V will lead to better local control without conferring a high rate of complications, and should be assessed on an individual basis according to the predictive factors. We conclude that formal modified radical neck dissection (MRND) is necessary to reduce the morbidity of reoperation surgery, we suggest it be adopted more uniformly in the management of LND in patients with PTC.