A Rare Case of Bilateral Pheochromocytoma

Pheochromocytoma is a neuroectodermal tumor of the catecholamine-producing chromaffin cells of the adrenal medulla. Hereditary pheochromocytomas occur at a younger age and tend to be multifocal and/or bilateral at presentation. Metaiodobenzylguanidine (MIBG) scintigraphy, urinary or serum metanephrines (normetanephrine and metanephrine), has been used to evaluate patients with pheochromocytoma. Pheochromocytoma is a surgical disease. Complete resection of the tumor is advised whenever possible. Hereby discussing a case of bilateral adrenal incidentaloma in young 19-year-old female presenting with hypertension and cerebral vascular episode where further evaluation revealed the diagnosis of bilateral pheochromocytoma and bilateral adrenalectomy (right-side cortical sparing) was done without significant perioperative complications.

A 19-year-old female presented with complaint of an episode of spontaneous onset of seizure with jerky movements of hands and legs with no uprolling of eyes. It was associated with hypertension. There was no history of trauma, headache, blurring of vision, nausea, and vomiting.

Patient was evaluated and MRI, CT brain revealed acute intraparenchymal hemorrhagic foci in right gangliocapsular region with mass effect in form of compression in ipsilateral lateral ventricle. Cerebral angiogram was followed, which revealed 35 × 16 mm with density of 57-71 HU intracapsular hemorrhage in right lentiform nucleus and external capsule, perifocal edema, and midline shift of 3 mm. She was started on conservative management of LEVETIRACETAM, PHENYTOIN, MANNITOL, and 3% NaCl. Her repeat CT brain images did not show any significant interval changes. There was no remnant neurofocal deficit or any repeat episodes of seizures and patient was symptomatically better and continued on tablet LEVETIRACETAM. 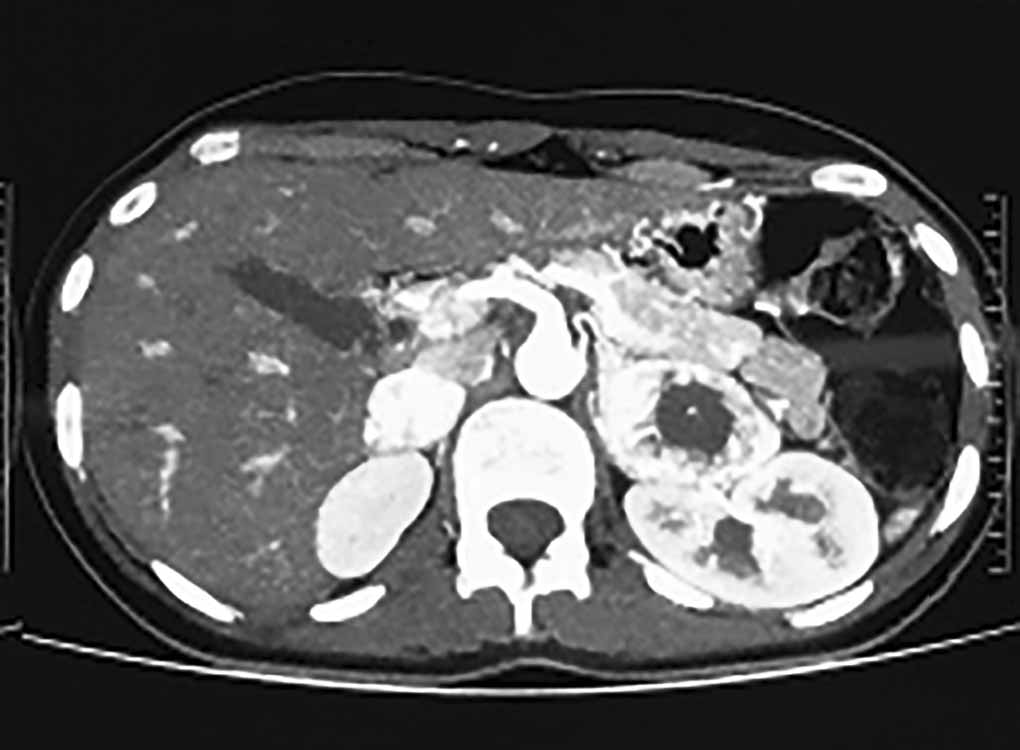 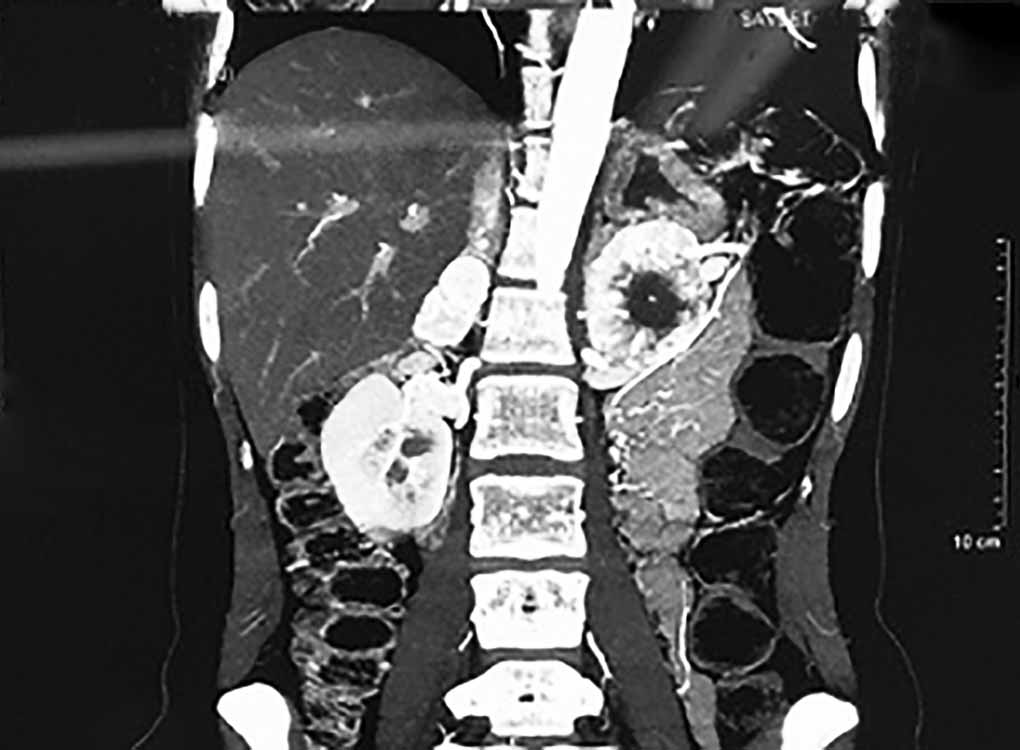 Further evaluation was done with 131I MIBG scan, which showed concentrating tumor in bilateral adrenal gland suggestive of bilateral pheochromocytoma and no other paraganglioma (Figs 3 and 4). 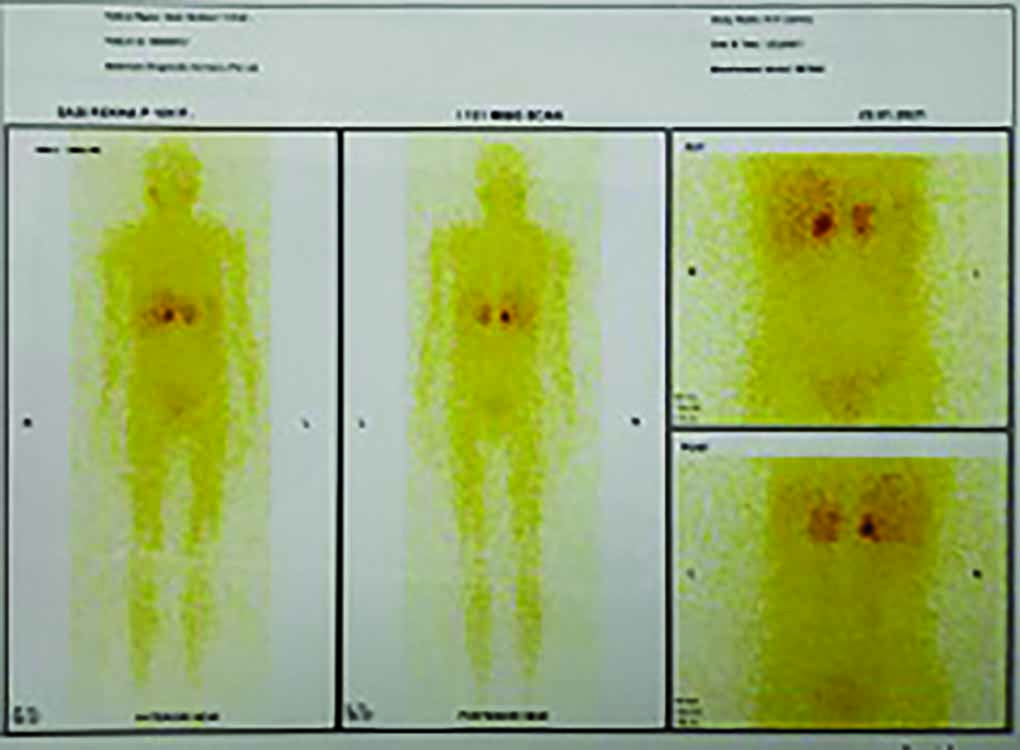 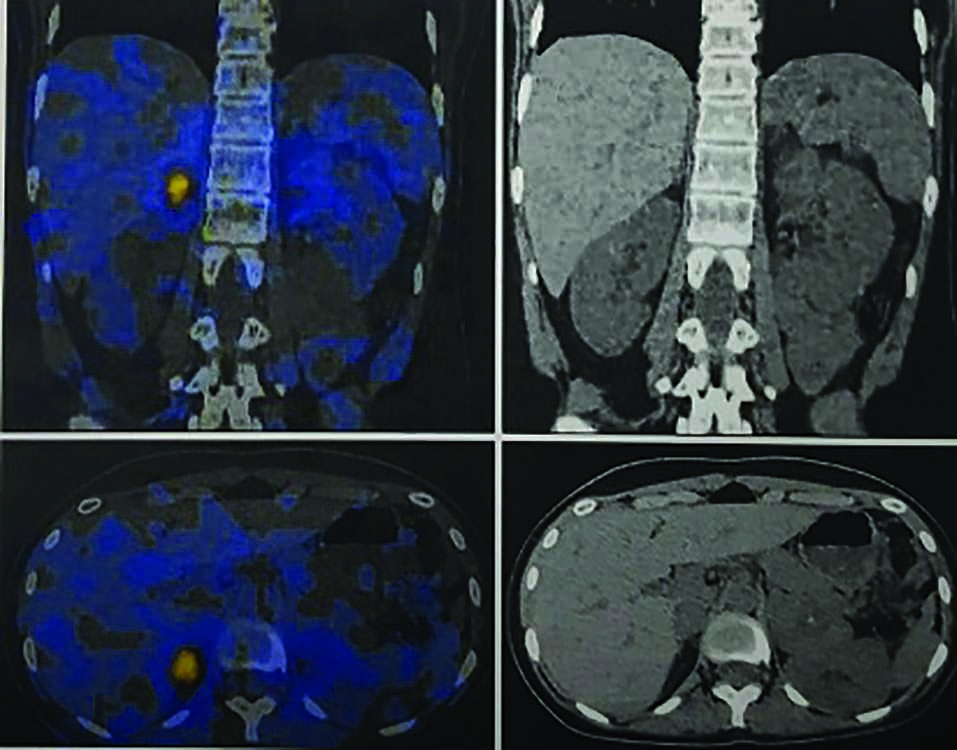 As the diagnosis of pheochromocytoma was established, antihypertensive management was modified to include alpha blockers hence patient was started on tablet PHENOXYBENZAMINE 10 mg BD along with tablet METXL 25 mg BD and tablet NICARDIA-R 20 mg BD which she continued for 1 month till the day of surgery. Her blood pressure was vigilantly monitored and barring few hypertensive episodes per day was fairly under control and patient was asymptomatic.

Preoperatively, necessary IV hydration and antiepileptics were given and surgery for bilateral adrenalectomy was planned. Under necessary anesthesia cover, with rooftop incision, right adrenal gland (3 × 3 cm) was visualized after kocherization and mobilization of colon. Adrenal vein and artery were ligated and divided. Right adrenalectomy was uneventful without any intraoperative fluctuation of BP. To approach left adrenal gland tumor (4.8 × 4.5 cm), pancreas and spleen were mobilized and multiple feeding vessels were ligated. Left adrenal vein was isolated, ligated, and divided. Left adrenalectomy and removal of specimen were involved with high intraoperative BP of 200/120, which was managed efficiently by anesthesia team. No other metastatic features were noted in intraabdominal examination of liver or nodes. Surgery was uneventful and patient’s perioperative recovery was satisfactory (Fig. 5). 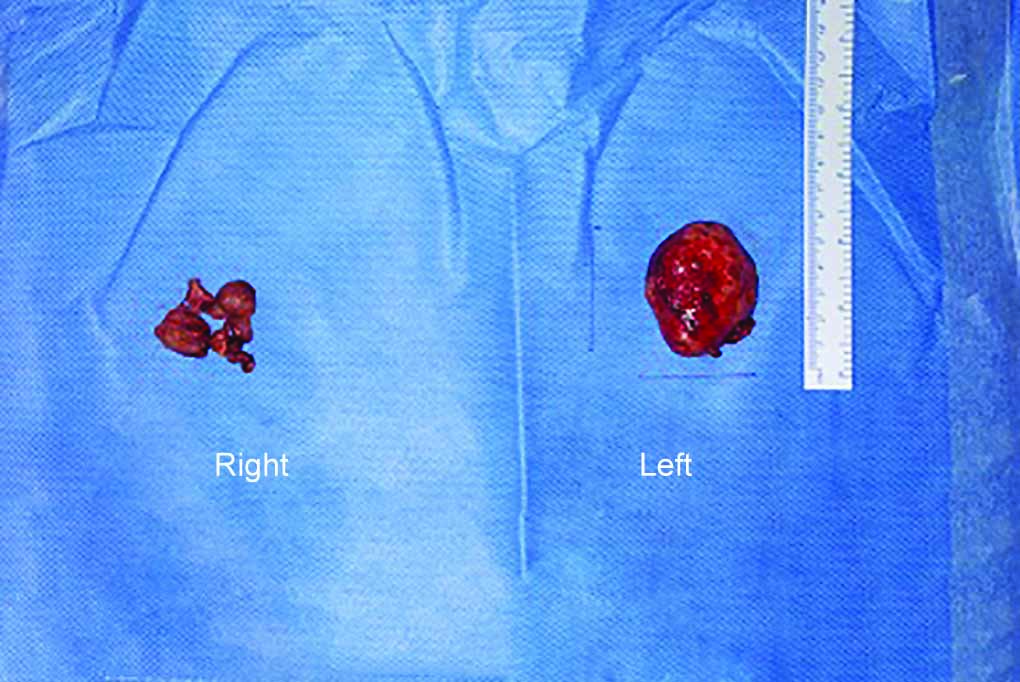 She was started on tablet fludrocortisone 0.1 mg, which was gradually tapered and stopped till POD 7. Initially IV HYDROCORTISONE and later oral was continued for the patient. She continued to get potassium correction in view of hypokalemia, which was gradually stopped and low salt IV albumin correction was given in view of hypoalbuminemia. Patient continued to take antiepileptic treatment. 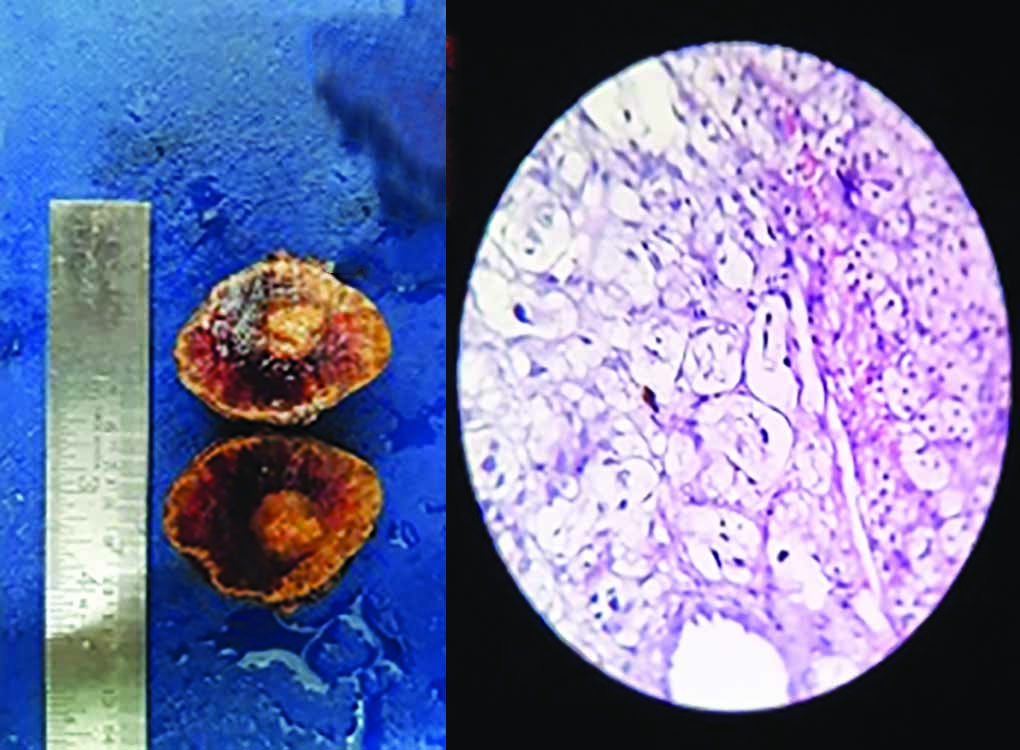 One month after the surgery, plasma metanephrine was 28.60 pg/mL and plasma normetanephrine was 110.7 pg/mL. Patient was in regular follow-up and showed satisfactory recovery.

Pheochromocytoma is a neuroectodermal tumor of the catecholamine-producing chromaffin cells of the adrenal medulla. Classically, pheochromocytoma has been called the “10% tumor”: 10% extra-adrenal, 10% familial, 10% bilateral, 10% pediatric, and 10% malignant. Nonhereditary cases of pheochromocytoma are most often diagnosed in the fourth and fifth decades of life. Familial tumors present at a younger age. A hereditary syndrome is suspected when patients are found to have a pheochromocytoma at a young age, bilateral or recurrent disease, or extra-adrenal disease.1

Paraganglioma (PGL) is an extra-adrenal tumor of the autonomic nervous system. When discovered during imaging accidentally, adrenal tumors are referred to as adrenal incidentalomas. Many syndromes are associated with pheochromocytoma such as neurofibromatosis type I with highest malignant potential, Von Hippel-Lindau Syndrome, multiple endocrine neoplasia.2

Paroxysmal hypertension is the classic presenting sign. Classical hallmark of pheochromocytoma is the triad of headache, episodic sudden perspiration, and tachycardia. More than 20% of patients can be asymptomatic.

The diagnosis of pheochromocytoma is made by excess secretion of catecholamines. Testing for urinary or serum metanephrines (normetanephrine and metanephrine) is done and represents the modern advancement in biochemical investigations.3,4

Imaging studies include MRI (the most sensitive modality), CT imaging, and 131I metaiodobenzylguanidine (MIBG) scanning. MIBG is a small-molecule analog of norepinephrine. With MIBG tagged with either 131I or 123I, MIBG scintigraphy has been used to evaluate patients with pheochromocytoma. FDG PET was equally effective, but was more sensitive in detecting metastatic disease.5

Pheochromocytoma is a surgical disease. Complete resection of the tumor is advised. Debulking and metastasectomy can be considered in patients who have significant resectable tumor slowly progressive disease presentation.1 A minimally invasive approach8 is advised for patients with MEN II or von Hippel-Lindau disease. The disease should be small, unilateral, and bilateral pheochromocytoma less than approximately 6 cm in size for minimal invasive surgery.9 In high-risk bilateral disease, partial cortical-sparing adrenalectomy is advised. Cortical-sparing adrenalectomy, either open or laparoscopic,8 has been performed successfully in patients with MEN II10 or von Hippel-Lindau disease with bilateral pheochromocytomas. This avoids lifelong steroid hormone replacement and Addisonian crisis risk.

Patients improve after surgical resection of pheochromocytoma. Hypertension may persist postoperatively in 25% of patients, especially in those with sustained hypertension preoperatively. Surgical resection has excellent prognosis. Disease may recur after many years of resection in approximately 16% cases. Hence, vigilant lifelong follow-up like measurement of plasma-free metanephrines at 1, 6, and 12 months postoperatively,3,4 then annually is advocated. Additionally cross-sectional imaging is also contributory.

The most common sites of metastasis are to bones, lungs, liver, and lymph nodes. Radiofrequency ablation (RFA) and transarterial chemoembolization (TACE) are other options for unresectable metastases. In clinically stable but poor surgical candidates,131I-MIBG can be used for locoregional control.11 26,132 Cyclophosphamide-dacarbazine-based cytotoxic chemotherapy regimens are used in unresectable disease where other treatment options are exhausted.

Pheochromocytoma should be ruled out in young age uncontrolled hypertension. It is a surgically resectable disease which, if managed early, can improve the outcome of the surgery and quality of life of patient both systemically and hormonally. Team of specialists is imperative in managing the patient in perioperative time, which is an extremely high-risk area for both morbidity and mortality of patient in view of fluctuations of blood pressure and high risk of cardiovascular and cerebrovascular episodes. Postoperatively, patient needs to be managed by expert endocrinologist for lifelong hormonal supplementation. Regular follow-up with radiological investigations and oncological management are needed to ensure disease-free life of patient.

No funding was provided.