Thyroidectomy is the most frequently performed endocrine surgery world over.1 Hypocalcemia is the commonest complication post-TT. Temporary and permanent hypocalcemia post-TT ranges from 19% to 38% and 0.2% to 10%, respectively.2,3 Factors responsible for hypocalcemia are devascularization or inadvertent removal of the parathyroid gland, surgery for malignancy, hyperthyroid state, and prolonged surgical time.4 Of these, the most important is the number of parathyroid glands identified and preserved during thyroid surgery.

The study was conducted from 1st April 2018 to 31st July 2019 at King George’s Medical University, India. Patients diagnosed with benign multinodular goiter (MNG), toxic nodular goiter, and Graves’ disease planned for TT, were included in this study. Those patients with proven malignancy on fine-needle aspiration cytology (FNAC) before surgery, patients on steroids, concomitant hyperparathyroidism or any dual pathology, completion thyroidectomy (i.e., surgery for recurrent goiter), patients with serum creatinine level >1.5 mg/dL, patients less than 18 years of age, pregnant and lactating women, or those not consenting were excluded from this study.

Patients were randomized into two groups A and B (as described below). Simple randomization was done by the principal investigator. Serum calcium (total and ionic), phosphorus, magnesium, albumin, alkaline phosphatase, 25-OH vitamin D, and serum intact parathyroid hormone (iPTH), were measured apart from the routine blood investigations. Bone mineral density (BMD)—three sites, (i.e., distal 1/3rd of radius-ulna, lumbar vertebrae L1–L4, and hip joint) was performed once, after allocating the group. After these tests, group “A” patients underwent surgery. Group “B” patients were supplemented with calcium and vitamin D for 6 weeks. After 6 weeks of supplementation, the above blood investigations were repeated, and then patients underwent surgery.

Group A received no calcium and vitamin D supplementation. Those in group B were supplemented with oral calcium in the form of calcium carbonate 2000 mg/day (elemental) in two divided doses for 6 weeks (each tablet consisted of 1500 mg of salt, with elemental calcium 500 mg with vitamin D 250 IU, a total of four tablets per day), and vitamin D in the form of oral gel capsule of cholecalciferol 60,000 units every week for 6 weeks before surgery, irrespective of the serum 25-OH vitamin D levels. Surgery in Group B was performed within 1 week of the last dose of medication. The consolidated standards of reporting trials (CONSORT) diagram is shown in Flowchart 1. 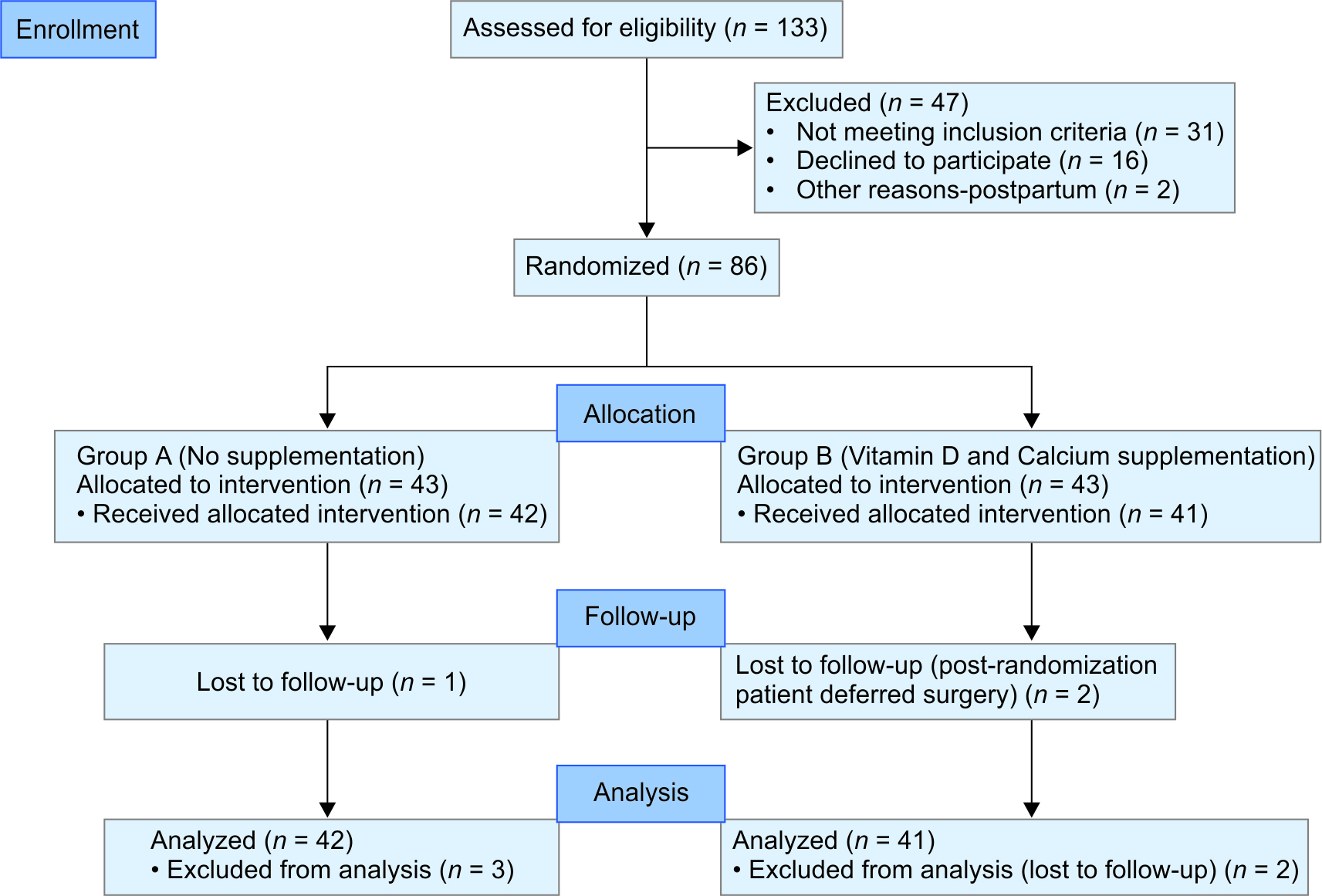 Flowchart 1: Flow diagram of patients enrolled in this study, and those patients who underwent the intervention in both groups, followed by surgery, follow-up, and analysis

None of the patients were given postoperative prophylactic supplements and were monitored for clinical features of hypocalcemia, like perioral tingling, numbness in fingers, and Trousseau sign. On POD-1, serum iPTH, calcium (total and ionic), phosphorus, magnesium, and albumin were checked. On POD-2, 3, 10, and 30, serum calcium and phosphorus were monitored. Biochemical hypocalcemia is defined as serum total calcium (albumin corrected) levels <8.2 mg/dL (lower limit of the laboratory range).

Asymptomatic patients were discharged on POD-3 after checking their calcium levels. Symptomatic patients with tingling or numbness were started on oral calcium carbonate (1 gm thrice a day) with or without calcitriol supplementation (calcium carbonate in the form of elemental calcium 500 mg with vitamin D 250 IU and calcitriol titrating dose according to hypocalcemia, starting from 0.75 μgm a day in three divided doses to a maximum of 1.5 μgm per day in divided doses).

Departmental protocol for the calcium (oral and i.v.) supplement mentioned in Table 1. These patients were discharged after clinical hypocalcemia was resolved. Patients were followed-up on POD-10 and 30 with monitoring of serum calcium (total and ionic) and phosphorus levels. The primary outcome was to see clinical hypocalcemia rates and compare between both groups and the secondary outcome was to see if preoperative parameters (mentioned above) had any effect on postoperative hypocalcemia.

Statistical analysis was done by using IBM-SPSS version 23.0 (Chicago. Inc, USA). The categorical variables were expressed as percentages and were analyzed by the Chi-square test. Continuous data were expressed as mean ± SD (standard deviation) was analyzed using independent t-test. Pearson’s correlation coefficients were calculated between POD-1 serum calcium and age, sex, body mass index (BMI), preoperative blood parameters, BMD, and intraoperative parameters (weight of thyroid gland, number of parathyroid glands visualized). Of these variables which were significantly associated with POD-1 calcium, multiple linear regression analysis was done. A p-value of <0.05 was taken as statistically significant and all the tests were two-tailed.

*Preoperatively FNAC was benign, hence, included in study, postoperative histopathology showed non-invasive follicular thyroid neoplasm with papillary-like nuclear features (NIFTP) (n = 4, in one of the nodules of MNG) considered as malignant, without any high-risk features

The current study showed post-TT, serum total calcium levels on POD-1 between both groups were comparable as mentioned in Table 3, as well as other parameters measured on POD-1. Though clinical hypocalcemia in group B was found to be less. This finding was partially similar to a previous study from India, where they did not observe a significant difference between serum calcium level on POD-1 (p = 0.21) between supplement and nonsupplementation groups. They found that on POD-2, three serum calcium levels were significantly lower in the nonsupplemented group (p = 0.04 and 0.01, respectively). Their study found clinical hypocalcemia rates higher in patients without supplementation 12 vs 3 patients (p ≤ 0.01). Also, they found a significant correlation between preoperative calcium and postoperative calcium levels (r = 0.618, p < 0.001),14 whereas the current study did not find any significant correlation of any preoperative parameters with POD-1 calcium (r = 0.181, p < 0.101). The rate of clinical hypocalcemia in this study (37.3%) was comparable to previous studies 19–38%.2

Clinical hypocalcemia was found higher in patients with three glands being identified 51.3% (n = 19 of 31), this may be due to parathyroid stunning. The other mechanisms are possibly due to reduced bone resorption, reduced calcium reabsorption from ascending thick loop of Henle, or reduced conversion of 1,25-OH vitamin D, which in turn reduces intestinal absorption of calcium.16 Hypocalcemia was resolved in these patients and none had clinical manifestations of hypocalcemia at the end of 1 month. Incidentally, POD-1 serum calcium was lower in group B, however, it was not found to be significant. It is likely because of the outliers/extreme values which is evident as the group B patients had higher PTH and also higher standard deviation. Also, serum electrolytes including calcium apart from PTH are affected by perioperative fluid management, the fluid balance which is dependent on the duration of fasting, was not taken into account.

Another study from India found post-TT hypocalcemia to have a significant association with POD-1 PTH17 and hyperthyroid vs nonhyperthyroid state which was similar to our study. Vitamin D deficiency was not found to be a predictive factor of post-TT hypocalcemia in our study which was similar to previous study.17 On discharge, these patients were advised oral cholecalciferol 60,000 units weekly for 6 weeks for vitamin D deficiency. Vitamin D deficiency was comparable to previous studies with community-based having a prevalence of 50–94% and in patients having 37–99%.6

There are a few limitations to this study. The serum PTH levels were done on POD-1 due to logistic issues at the start of this study. Later on, the laboratory test was available for immediate postoperative value. So, only 46 patients had the value, hence is being evaluated as a part of another prospective study, which is not included in this study.