The management of hyperthyroidism depends upon the differentiation of two of its common etiology, i.e., Graves’ disease (GD) and destructive thyroiditis (DT), and may cause a diagnostic dilemma in a few cases. In GD, thyrotoxicosis is due to the hyperfunctioning of thyroid gland, whereas in DT, destruction of gland leads to excess release of the stored thyroid hormones. Thyroid scintigraphy is a gold standard tool in differentiating the etiology of hyperthyroidism, but it is not widely available and not cost-effective. In GD, the modalities of treatment advocated include antithyroid drugs, radioactive iodine, and surgery, but in thyroiditis, symptomatic relief with anti-inflammatory agents and beta-blockers constitutes the first line of management. Elucidating the diagnosis is of paramount importance in categorizing hyperthyroidism with regard to GD and DT.

High-resolution ultrasonography (HRUSG) with CD is a widely available, cost-effective tool employed in all cases of hyperthyroidism. Various parameters can be analyzed by HRUSG with CD in addition to the routinely measured sonographic details of the thyroid. Blood flow in GD is usually so high that the peak systolic velocity (PSV) in thyroid arteries can reach up to a mean of 100 cm/s more than the reported normal mean thyroid artery PSV, which is 15 to 30 cm/s, and it would vary from thyroiditis.1 The major source of blood supply to the thyroid gland is by the superior thyroid artery (STA) and inferior thyroid artery (ITA); STA, being the first direct branch of external carotid artery, has a preponderance of blood supply to the thyroid parenchyma compared with the ITA, which is a branch of thyrocervical trunk arising from the subclavian artery. This increased vascularity in GD is exploited in our study to evaluate the dynamics of blood flow with regard to thyrotoxicosis.1-3

The HRUSG with CD is a technology used for quantitative and qualitative measurement of vascularity in the thyroid gland. It records the blood flow velocity using color encoding images, which is superimposed on the gray-scale image. The condition of parenchymal blood flow is an important indicator of thyroid status. For quantitative Doppler evaluation, the PSV (the Doppler waveform recorded at the point with the highest frequency shift) was used, which permits the analysis of velocity and spectral parameters of the blood flow as well as the calculation of some indices.

This prospective study was done in the Department of Endocrine Surgery, Madras Medical College, Chennai, India, a tertiary care referral center in South India over a 1-year period from August 2015 to July 2016. Patients’ informed consent and Institutional Ethical Committee approval were obtained for this study.

Newly diagnosed hyperthyroid patients exhibiting features of thyrotoxicosis with biochemically elevated free triiodothyronine (FT3) and free thyroxine (FT4) and suppressed thyroid-stimulating hormone (TSH) values (normal range TSH: 0.5–5.0 μIU/mL, FT4: 0.82–1.51 ng/dL, FT3: 1.95–5.4 pg/mL) were included as study cohorts. The study cohorts were classified into two groups based on the scintigraphic findings performed using (Tc-99m) technetium pertechnetate. Group I comprised GD showing diffuse increased uptake, and patients with low or no uptake were categorized as DT in group II. Totally, 120 patients were eligible and included in this study based on the above-said criteria. Of these 120 patients, 54 patients were in group I and the remaining 66 cohorts in group II. A total of 55 age- and sex-matched euthyroid patients were included in the study to serve as controls.

Using HRUSG with CD, various parameters like mean PSV, EDV, PI, RI of STA and ITA on both sides were evaluated by a single sonologist who was blinded to the biochemical and scintigraphic details. The thyroid volume was also calculated using the formula length × width × depth × 0.479.

The HRUSG with CD evaluation of thyroid arteries measurement was done in 1-mm sample volume adjustment in vessel center with the insonation angle kept 0° to 60° and correction angle adjusted parallel to the vessel wall.6 Transducer pressure over skin was minimum, with appropriate transducer and equipment adjustment; velocity scale was maintained with values ≤5.0 cm/s. The PSV and indices were measured in the ITA and STA. 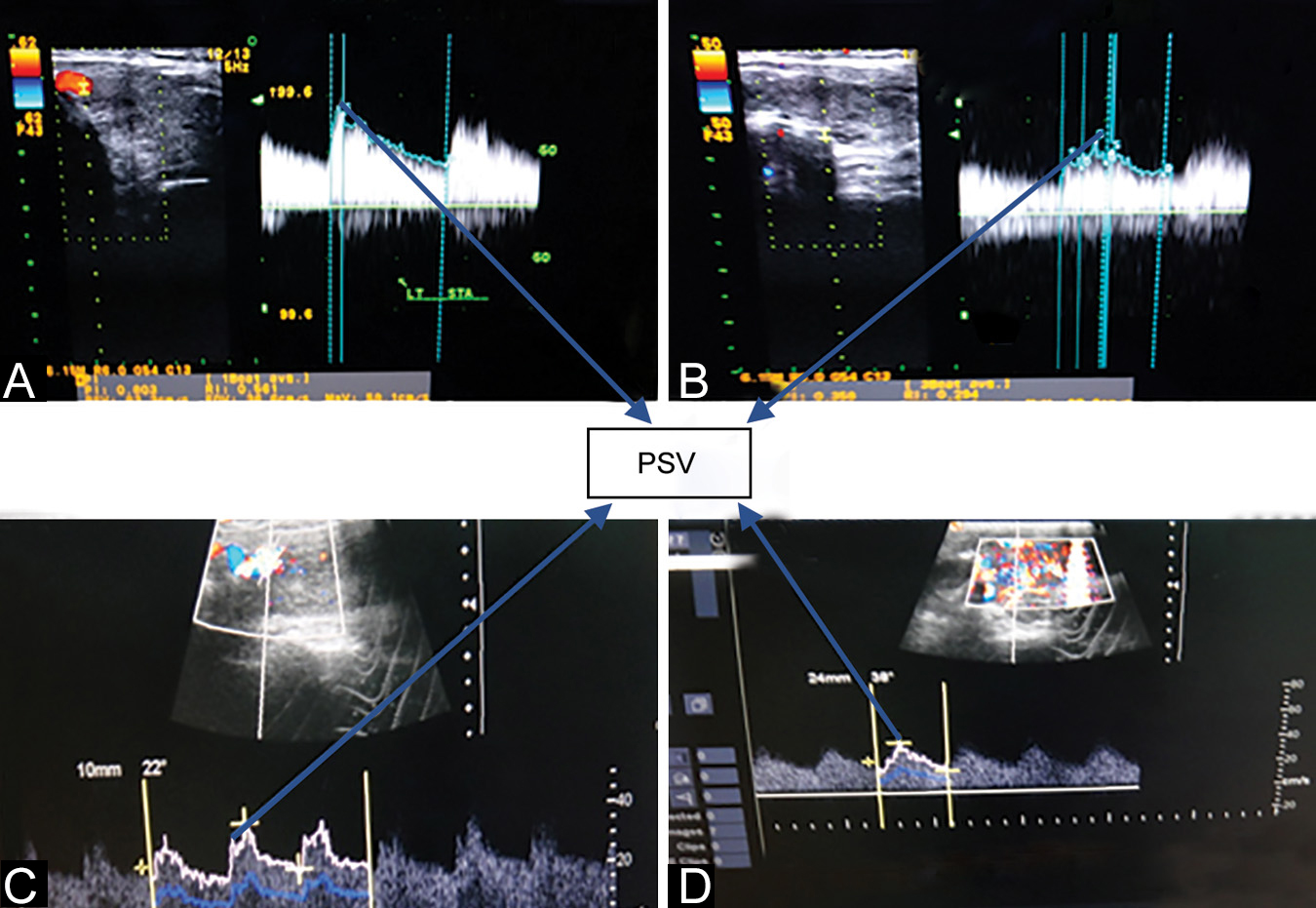 The comparison of various parameters between the two study groups is documented in Table 1.

Our study has demonstrated the utility of HRUSG combined with CD in the evaluation of the most common forms of hyperthyroidism in a simpler and cost-effective way, negating the use of scintigraphy in selected patients. The major concern for the clinician in the outpatient setting would be to distinguish GD from DT in a thyrotoxic patient. Graves’ disease though has its unique features of ophthalmopathy and other skin changes, there are certain overlapping signs and symptoms in both the entities. An HRUSG with CD is widely available and is increasingly used by thyroid specialists in their outpatient setting. Thus, surgeons performing USG examination will be an extension of clinical evaluation in the outpatient department with the results available immediately for choosing the management strategy.7,8

The method used in thyroid HRUSG and CD evaluation is a semiquantitative measurement of the blood flow pattern in the thyroid gland parenchyma, thyroid blood flow pixels per thyroid cross-sectional area, and blood flow velocity in the thyroid artery.10 Thyroid CD is a cost-effective, viable alternative available widely, which is noninvasive and radiation free. An HRUSG with CD can be used initially in the differential diagnosis of thyrotoxicosis.11-13

In a study by Donkol et al,11 the mean PSV of 40.0 cm/s in ITA was higher and suggestive of GD, while most other studies proposed a PSV of above 50.0 cm/s. Values above 100 cm/s can be reached in newly diagnosed patients or patients not responsive to treatment. In our study group, the mean PSV in STA in untreated GD patients was 54.09 ± 4.67 cm/s.

In a study by Donkol et al that PSV of ITA was significantly higher in GD than DT patients. An HRUSG with CD demonstrated sensitivity of 88.9% and specificity of 87.5%, and a positive predictive value of 94.1%, negative predictive value of 77.8%, and diagnostic accuracy of 88.5%, in the differential diagnosis of thyrotoxicosis compared with 99mTc scintigraphy.11

Kumar et al13 in their study reported mean PSV-ITA values of 22.4 ± 5.4 cm/s in DT and 57.6 ± 13.1 cm/s in untreated GD patients. In our study, the PSV-ITA in GD was 32.11 ± 2.45 cm/s, whereas PSV-ITA in DT patients was 25.23 ± 3.45 cm/s. The reported values were slightly lower than the values in our study subjects, probably due to operator-dependent sites of thyroid artery sampling and racial differences between studies.

In most literatures, it has been observed that vascularity in GD decreased in parallel to the biochemical remission and clinical control, and that HRUSG with CD has the potential to monitor therapy response in patients, as well as distinguish GD patients from DT, with B-mode pattern, without the need for expensive laboratory assays in their studies.9,14,15

The 2011 American Thyroid Association guidelines mentioned HRUSG with CD as a reliable indicator of thyroid blood flow, and that it may have a practical value in the differentiation of cause of thyrotoxicosis, especially in pregnant patients or patients with recent iodine exposure. Its use has also been recommended in special circumstances like amiodarone-induced thyrotoxicosis (AIT) in differentiation of type I AIT from type II AIT.17

Our Hospital is owned and operated by the State Government and all the Services are rendered free of cost to the patients. Considering that High resolution ultrasound Machine is a one-time investment with negligible operating cost, including the consumables and a single operator needed to perform color doppler flow assessment.

Were as other investigations such as Thyroid Scintigraphy does have a high operating cost considering strict measures to be adhered when handling the Radioactive material, which is expensive and also has a short shelf life. The man power involved in the process of performing the test is also more. Performing a HRSUG would cost approximately, INR 500, elsewhere but performing a Scintigraphy would cost INR 4000.Hence HRUSG is cost effective when compared to other widely used investigation.