Adrenal-renal fusion is a rare entity wherein the capsule of the adrenal gland is fused to the kidney. The condition is usually found incidentally and has no clinical significance. However, reports have shown this finding can be misleading on preoperative imaging.1,2 Here, we report a case of adrenal-renal fusion making intraoperative dissection challenging. We also report on four other cases of adrenal-renal fusion at our institution and a review of the literature.

We present a 54-year-old male with a long-standing history of difficult-to-control hypertension. Over a 10-year period, the patient had been on four different antihypertensive medications and on recent laboratory evaluation was found to have hypokalemia. Further laboratory analysis showed an aldosterone-to-renin ratio of 31. He was, therefore, diagnosed with primary hyperaldosteronism. A computerized tomography (CT) of the abdomen and pelvis was obtained, which suggested a small nodule in the right adrenal gland. To further elucidate the source, adrenal vein sampling was performed which lateralized to the right adrenal gland. The patient was taken to the operating room for a planned laparoscopic, transabdominal right adrenalectomy. The operation proceeded in the typical fashion. After the adrenal vein was ligated, attention was then turned to dissecting the adrenal gland away from the retroperitoneal fat and kidney. Typically, there is a layer of fat between the adrenal gland and kidney. However, in this case, there was no fat present between the two organs and the adrenal gland was noted to be tightly adherent to the kidney. This made dissection from the kidney challenging, and ultimately the capsule of the kidney had to be violated to remove the adrenal gland. As this is not the typical course of a laparoscopic adrenalectomy, there was a clinically insignificant increase in blood loss. However, the patient tolerated the operation well and was discharged on postoperative day 1.

On pathologic examination, a 1.7 × 1.5 × 0.7 cm portion of red-brown tissue attached to the surface of the adrenal gland was noted to be grossly consistent with renal parenchyma (Figs 1 and 2). Therefore, the patient was deemed to have adrenal-renal fusion, which explained the difficulty in the dissection in the operating room.

REVIEW OF THE LITERATURE AND PATHOLOGIC REVIEW OF OUR INSTITUTIONAL EXPERIENCE

On review of our institutional pathology experience with adrenal-renal fusion, four more cases were found between the years 2005 and 2014. A search of the literature resulted in 13 additional cases. Combined with the 5 cases from the authors’ institution, this totals 18 cases (Table 1). Eleven of the patients were female and 7 were male. The age ranged from 35 to 83 years, with a mean age of 56 years. The most common findings were renal cell carcinoma (n = 5) and normal pathology (n = 5), followed by adrenal cortical adenoma (n = 3) and renal cyst (n = 2). The location of the fusion was most commonly at the upper pole of the kidney (n = 13). (This does not make any sense. It is always in upper pole since, i.e., the anatomical position of the adrenal gland.) In all cases where distinction was made, the adherent or intrarenal adrenal tissue was adrenal cortical tissue. There were no reported cases of adrenal medullary tissue present in the fused portion of tissue. The length of the fusion ranged from 0.3 to 3.6 cm. 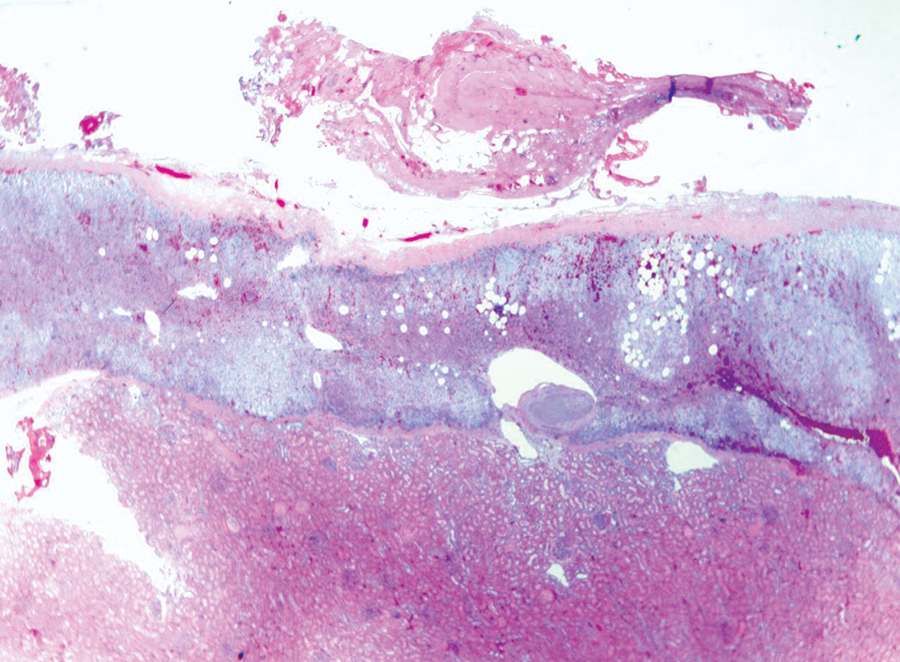 Photomicrograph showing adrenal gland and kidney. Arrow shows renal capsule with no fat between the kidney and adrenal gland 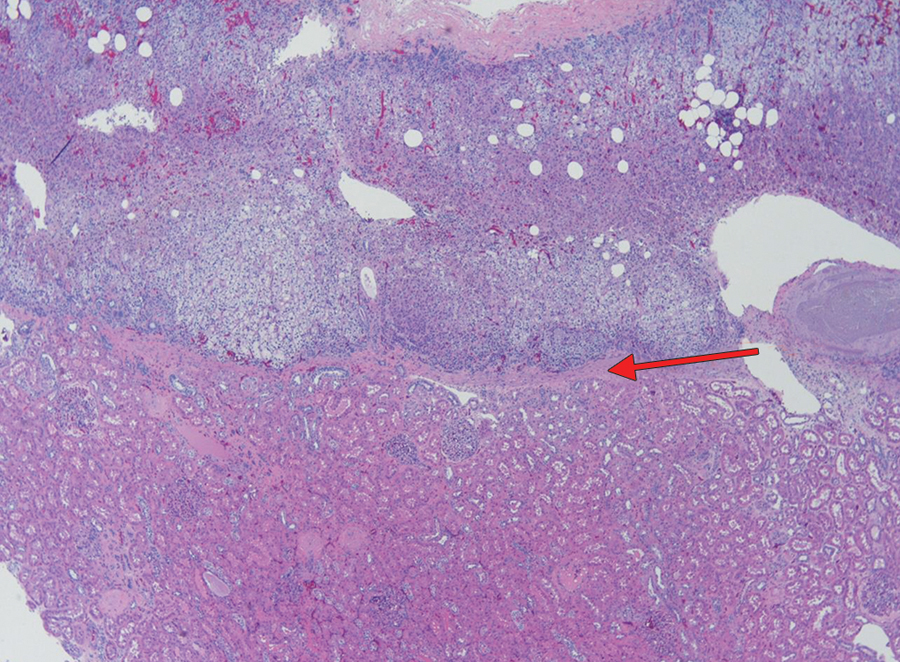 RADIOLOGIC REVIEW OF OUR INSTITUTIONAL EXPERIENCE

Adrenal-renal fusion is a rare finding that was first described by Rokitansky in 1855,3 who divided the fusion into two forms: A developmental type and a postinflammatory fibrosis type. It has been hypothesized that the developmental fusion form results from a failure of complete encapsulation of the two organs due to lack of stimulation by retroperitoneal mesenchymal tissue during the embryological development.1 The exact incidence of renal-adrenal fusion is unknown as it has only been described in the literature in several case reports and one case series.1,2,4,5 This review represents the second case series in the literature.

Typically, a fused adrenal gland and kidney are found incidentally after a resection and though the fusion itself usually causes no physiological symptoms and is clinically insignificant, its morphological anomaly can confuse radiologists on CT and magnetic resonance scans, leading to misdiagnosis. In addition to their close apposition, scanner resolution, diaphragmatic motion, and the averaging of adjacent voxels limit the ability of radiologists to always confidently visualize a fat plane entirely separating the two organs. While a large congenital fusion might be diagnosed prospectively, subtle fusions secondary to scarring could easily be missed. This is a location where it can even be difficult to confidently localize some lesions to either the kidney or the adrenal gland. Mahadevia et al1 reported a case in which an adrenal lesion mimicked a renal lesion on radiological imaging due to adrenal-renal fusion whereby an abdominal CT scan of a patient who presented with abdominal pain showed a focal lesion in the upper pole of the left kidney, which appeared to be a renal mass. Diagnosis of a renal cell carcinoma was made and the patient underwent laparoscopic partial left nephrectomy at which time it was found that the mass was actually arising from the adrenal gland. Pathology revealed that the mass was an adrenal cortical adenoma. In this case, the authors suggested that there was no way of making the correct diagnosis of adrenal adenoma before reviewing the specimen histologically after surgical resection.

In addition to the potential for the capsule of the two organs to become fused, it is possible that tissue from one organ can actually be found embedded in the adjacent organ. Colberg et al2 reported a case of complete renal-adrenal fusion that was discovered incidentally during a partial nephrectomy performed after diagnosing a solid mass in the upper pole of the right kidney. Histologic examination of the specimen revealed that the adrenal and renal cortical clear cells and the renal parenchyma were mixed with renal cystic changes at the junction of the fusion. Further immunohistochemical staining revealed the presence of some intrarenal adrenal tissues that had been completely embedded in the kidney showing as an ectopic adrenal tissue. Several other cases in this review presented in this manner. This highlights the importance of awareness of this condition as intrarenal adrenocortical clear cells may easily be confused with clear cell renal carcinoma.

Although the classic etiology for renal-adrenal fusion is a result of a development aboration, fusion can also occur as the result of a postinflammatory state. Fan et al4 reported a superior renal cyst diagnosed in a patient on CT examination. Upon resection, the cyst was found to be inflamed and thickly fibrotic. The histologic examination of the cyst was remarkable in that it showed the cyst to be of adrenal origin, suggesting that the mass was an adrenal gland that had undergone atrophy. The authors propose that the adrenal-renal fusion, in this case, was caused by cystic degeneration of the adrenal gland. The fibrosis that followed the degeneration was likely so strong that it obliterated the space that normally separates the adrenal gland from the kidney, leading to the fusion. One case in the author’s experience (case 4) presented in a similar fashion whereby the fusion appeared at an area of subcapsular hematoma, suggesting a postinflammatory reaction.

In conclusion, although renal-adrenal fusion is relatively rare in the literature, radiologists and surgeons must be aware of this condition and consider it as a possibility, especially when dealing with upper pole renal lesions in order to avoid misdiagnosis and unnecessary resections. It is the authors’ belief that adrenal-renal fusion may, in fact, be more common than reported. On review of our own series, in addition to the case presented here, we found four additional cases of adrenal-renal fusion, suggesting that there may be additional cases of adrenal-renal fusion that are not noticed by surgeons postoperatively. This entity can be particularly challenging during a laparoscopic adrenalectomy. Surgeons performing adrenalectomy should be aware of this possibility and consider this diagnosis when the dissection plane between the adrenal and renal tissue is particularly challenging.