The thyroid gland is the first endocrine gland to develop on approximately the 24th day of gestation.1 It descends anterior to the pharyngeal gut leaving only the foramen cecum at the posterior aspect of the tongue. The incidence of ectopic thyroid tissue is 1 in every 100,000 to 300,000 in general population2 and lingual thyroid (first described by Hickman3 in 1869) is the most common ectopic site (90%).4 Lingual thyroid is common in females (80%).5 In 70% of the cases, it is the only functioning thyroid tissue.6 And 70% of lingual thyroid patients are associated with hypothyroidism and 10% with cretinism.3 Although 99% of thyroid cancers develop within the thyroid, in rare cases, it can arise from the ectopic thyroid tissue.7 Rarity of this cancer justifies reporting this case. According to a postmortem study, in 10% of the cases thyroid tissue was observed at the base of tongue on macroscopic or microscopic examination.8 The number of reported neoplasms occurring in this tissue seems disproportionately small when compared with the frequency of tumor formation in the normally placed thyroid. Noussios et al2 have written of 15% malignant transformation of the ectopic thyroid.

Here, we report a very rare case of papillary carcinoma of lingual thyroid with bilateral neck node metastasis. The treatment of the disease is not standardized due to rarity. We have treated the patient in line of differentiated thyroid cancer. The natural history and prognosis of this disease are unknown.

A 45-year-old hypothyroid female patient was presented with a bilateral neck mass, oropharyngeal mass impending airway obstruction and drooling of saliva. She had been previously diagnosed as papillary carcinoma of lingual throid with neck node metastasis five years ago. She did not undergo any treatment for the same. On examination, there was pallor and peripheral edema and no cyanosis. Local examination of oropharynx revealed a 4 × 4 cm mass filling the oropharynx. There were bilateral neck nodes of approximate size 10 × 12 cm (Fig. 1), but trachea was in the midline and easily palpable. Lab reports revealed gross hypothyroidism and anemia. 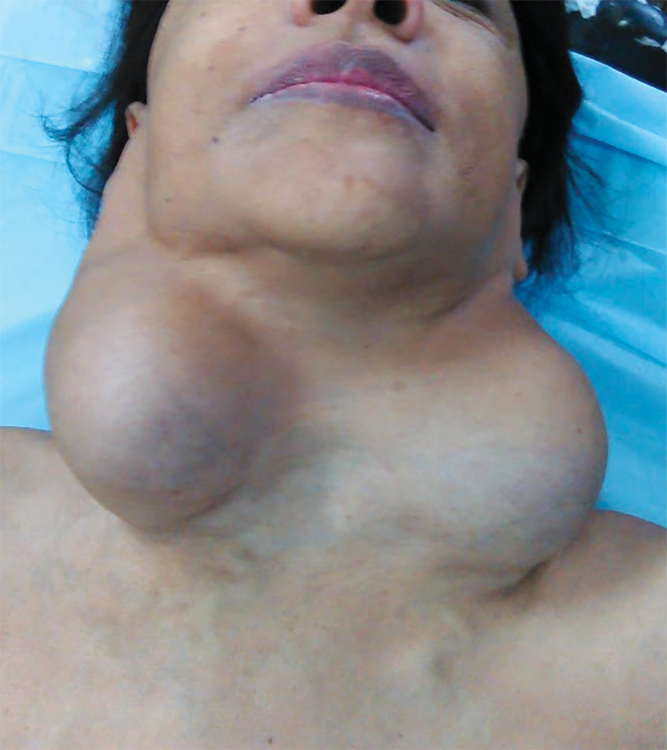 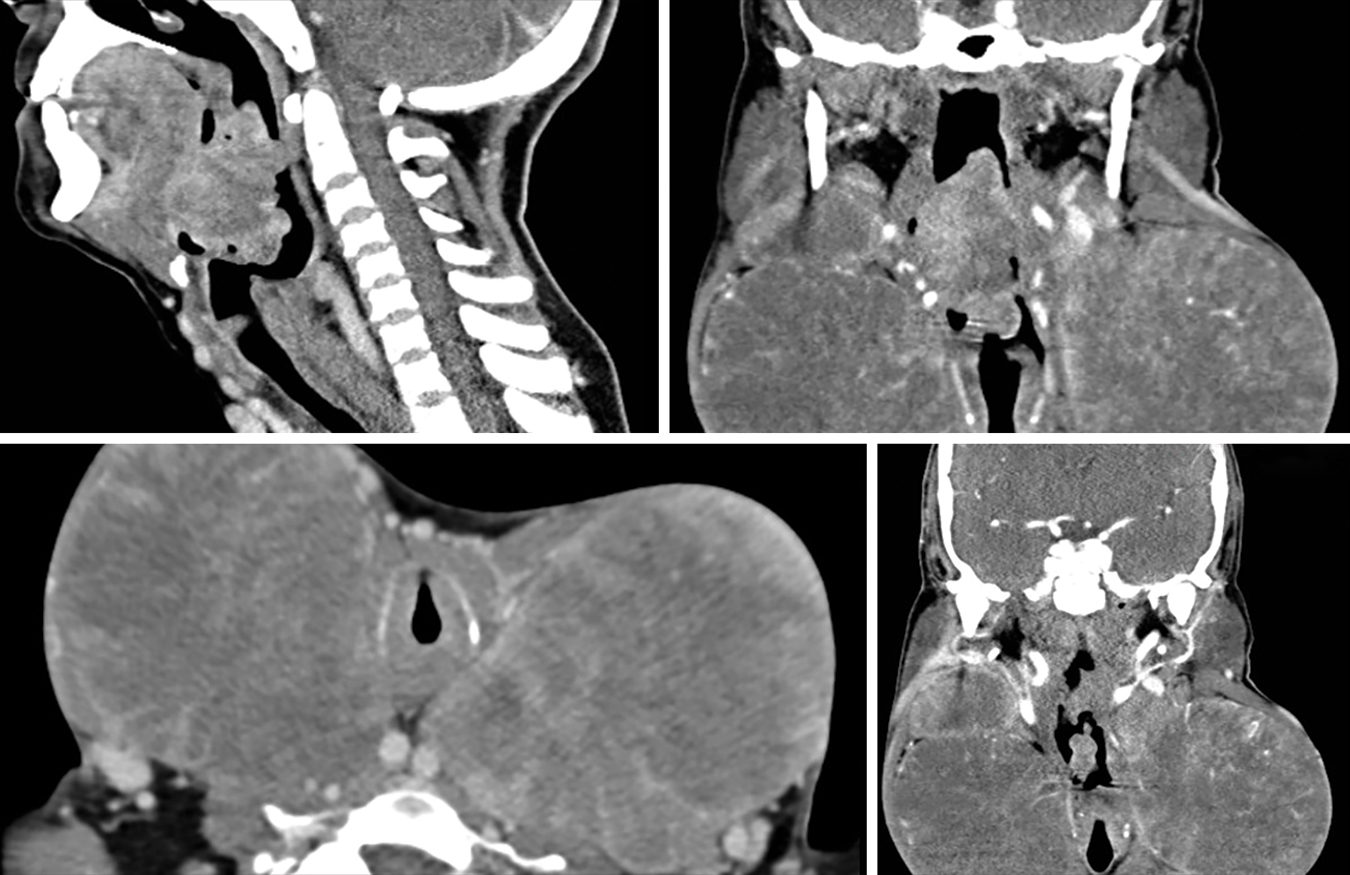 A large mass in the posterior one-third of tongue (Fig. 2) anterior to epiglottis and bilateral enlarged neck nodal masses pushing the carotids and jugular veins to the midline posterior to the pharynx were seen. No thyroid gland anterior to the trachea could be identified. Computed tomography (CT) thorax revealed no metastatic disease.

She was placed on head up position 40°. The patient was treated with incremental T4, supplemental oxygen, and corticosteroid awaiting emergency tracheostomy if airway obstruction occurs. We started T4 25 μg once daily and increased up to 100 μg on the 4th day. Then, we gave 500 μg T4 on the 5th day and continued with 100 μg daily dosages. The size of the lingual thyroid mass, as well as neck nodes, decreased over the next few days on incremental T4. After 7 days of the T4 supplementation and correction of anemia with blood transfusion, she was taken up for surgery. Thyroid function test day before surgery was T3 – 2.21 ng/mL, T4 – 6.37 μg/dL, and TSH – 31.89 uIU/mL.

Bilateral comprehensive node dissection with level VI clearance was done (Fig. 3). A lip splitting and Apron neck incision were given. Parathyroid and recurrent laryngeal nerves were identified and preserved in the paratracheal groove. A midline lip splitting, lateral mandibulectomy (Fig. 4) swing approach was done to access the lingual thyroid, which was excised. There was no pharyngocutaneous communication after excision. The raw area was left to heal by secondary intention. Mandibulotomy was closed with figure of eight steel wire. 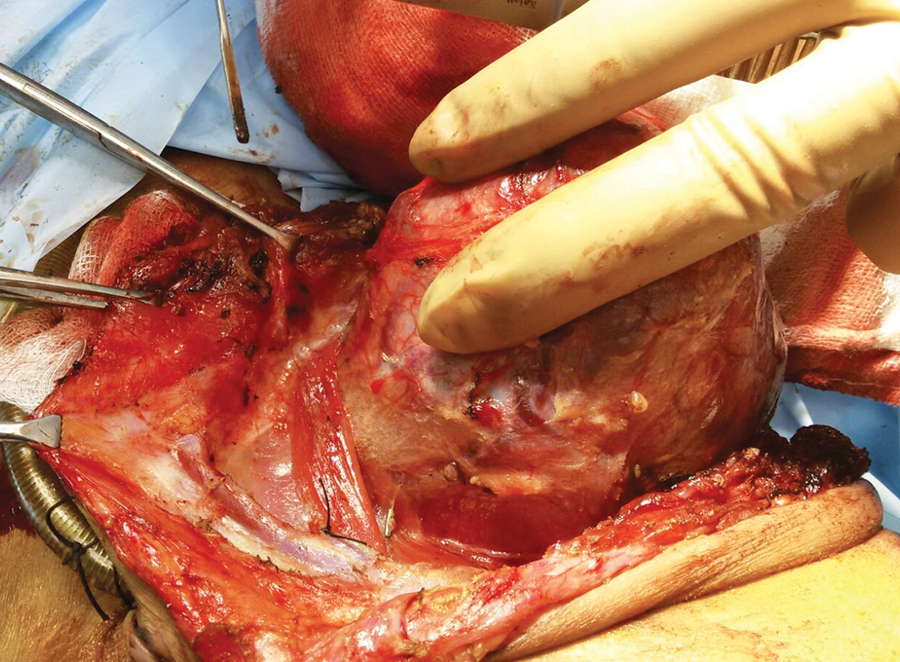 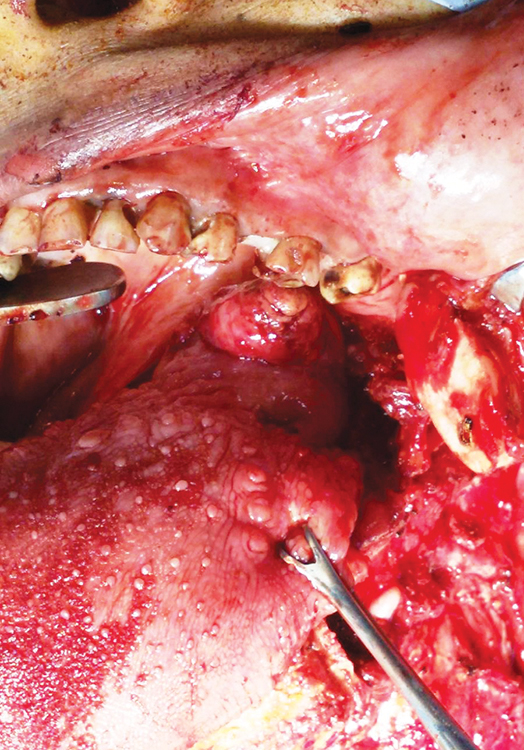 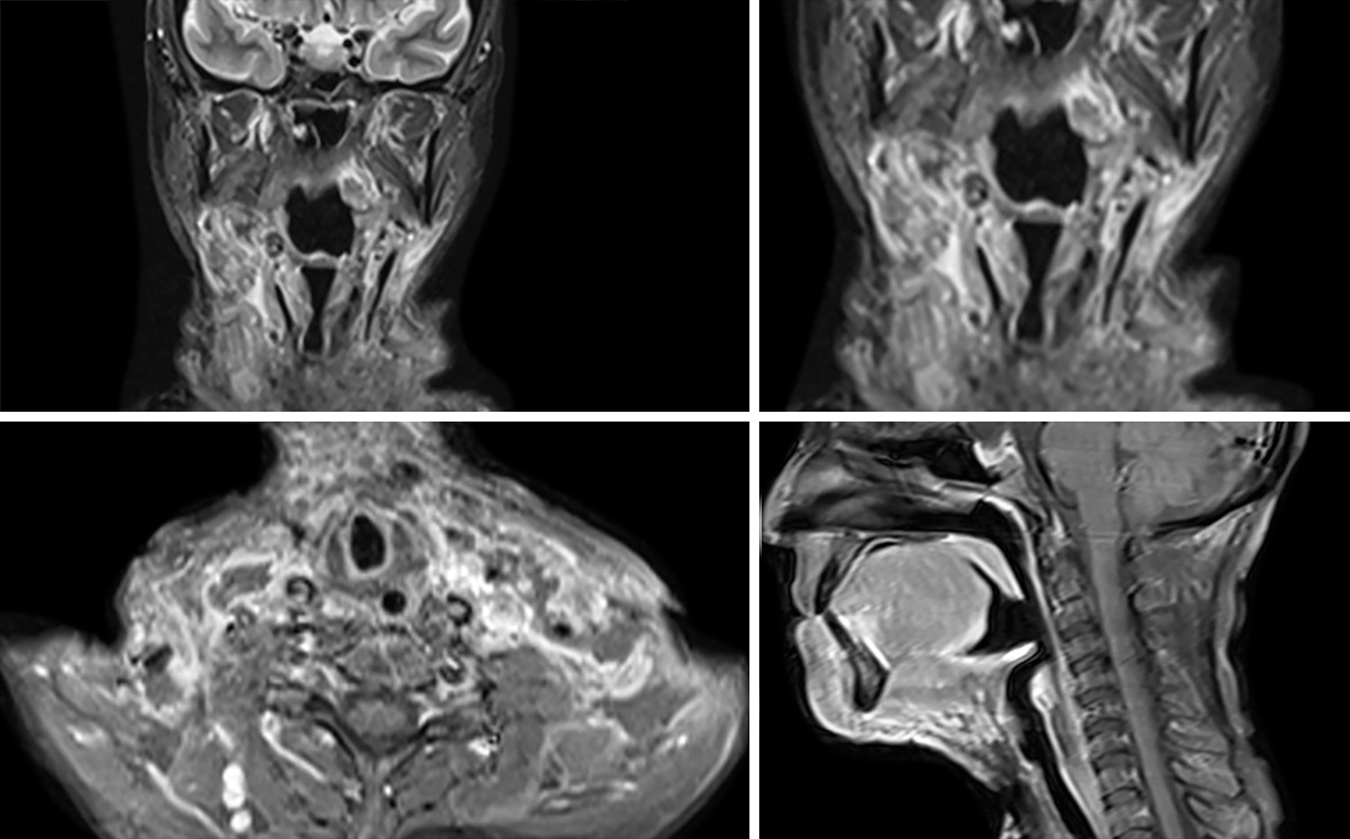 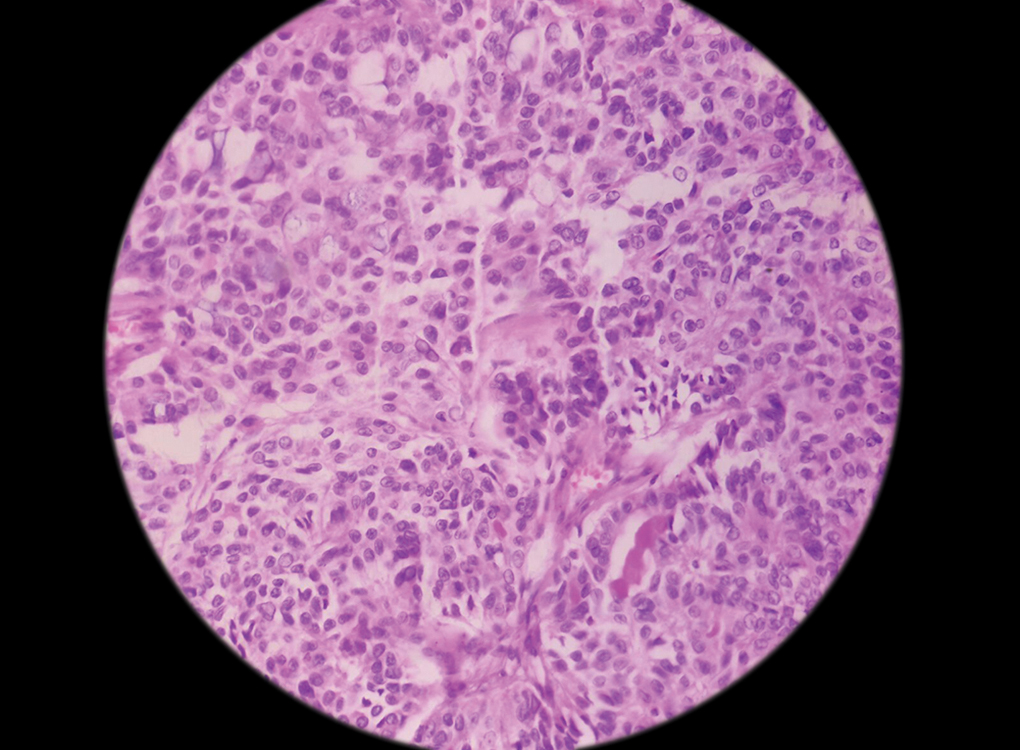 She had an uneventful postoperative recovery with a normal voice and swallowing. Supplemental T4 was continued postoperatively to facilitate healing and awaiting final biopsy report.

Thyroglobulin done after 3 weeks of operation was >300 ng/mL. The patient took radioiodine therapy thereafter and was doing well after 6 months of follow-up.

We report a case of lingual thyroid carcinoma with cervical metastasis and absent orthotopic thyroid gland. Kennedy and Riefkohl17 have reported a similar case in 2007 and claimed the first cases reported in the literature of its own kind.

In our case, we approach the tumor via midline lip splitting with lateral mandibulotomy approach, which provides us a good exposure of the entire oropharynx (tumor). We have managed the tumor according to the guidelines of differentiated thyroid cancer because of nonavailability of guidelines for ectopic thyroid cancer. After surgical excision of lingual thyroid and neck dissection, radioiodine therapy was given. The patient is doing well after 6 months of follow-up with no recurrence.

The surgical approach to a lingual thyroid cancer as well as adjuvant therapy and natural history remains to be ascertained due to the rarity of the disease. Lip splitting with lateral mandibulotomy and swing approach appear to give adequate exposure to lingual thyroid.