Hypocalcemia is one of the most dreaded complications after surgery of the thyroid and parathyroid glands. Hypocalcemia, especially when permanent, leads to significant impairment in the quality of life and is associated with a range of deleterious effects on general health. It is thus imperative that the operating surgeon understands the risk of hypocalcemia postsurgery and tries to minimize the risk of postoperative hypocalcemia by taking necessary pre-, intra-, and postoperative measures. With the recent surge in ambulatory thyroid surgery, which allows for the early discharge of patients, postoperative hypocalcemia becomes an even more important consideration.

The factors that predict the risk of postoperative hypocalcemia include the extent of surgery, concomitant lymph node dissection, surgery for retrosternal goiter, the experience of the surgeon, the number of functioning parathyroid glands left behind, and hyperthyroidism.9

Hypocalcemia is traditionally believed to be more frequently encountered in cases undergoing total TT as compared with relatively minor resections of the thyroid gland.15,16 This is expected since the more extensive surgeries are associated with a higher risk of manipulation of the parathyroid glands and their blood supply. Patients undergoing surgery for thyroid malignancies may have an additionally increased risk due to altered anatomy and often concomitantly performed lymph node dissection.17 Surgeries for retrosternal goiter are also associated with frequent occurrence of injury to parathyroid glands and increased risk of hypocalcemia.18 Following thyroidectomy reduction of calcium due to decreased renal tubular reabsorption of calcium was thought to be a factor.19

Most experts believe that the surgeon’s skill and experience can affect the occurrence of postoperative hypocalcemia.27 Indeed, this was first evident when patients who underwent TT by Theodor Kocher, using his principles of bloodless surgery, had a lesser incidence of postoperative hypocalcemia as compared with those operated by Billroth.28 However, a recent study found that patients operated by surgical trainees had complications that were comparable to patients operated on by consultant surgeons.29

The symptoms of hypocalcemia usually manifest 24 to 48 hours after surgery.30 Clinically, the patients can present with muscle cramps, perioral and peripheral paresthesias, carpopedal spasm or tetany, and confusion. However, more often, the patient is asymptomatic and the presence of mild hypocalcemia can only be detected biochemically. In patients with mild hypocalcemia, Chvostek’s sign and Trousseau’s sign may be positive. Chvostek’s sign is elicited by tapping over the area of the facial nerve to look for twitching of facial muscles. Trousseau’s sign is elicited by inducing pressure to the upper arm above the systolic pressure for 3 minutes, using a sphygmomanometer, to look for carpopedal spasm resulting from ischemia. Chvostek’s sign is absent in about one-third of patients with hypocalcemia and can also be noticed in 10% of persons with normal calcium levels. However, Trousseau’s sign is more sensitive and specific and is present in 94% of patients with hypocalcemia, while in only 1% of persons with normal calcium levels.

There is no consensus about the optimal postoperative time to determine the serum calcium level. Regular monitoring of serum calcium twice daily may be the preferred approach. In patients having hypocalcemic symptoms but normal serum calcium levels, ionic calcium should be estimated. Serum magnesium should be evaluated in patients with refractory hypocalcemia. High or normal serum phosphorus suggests hypoparathyroidism, whereas low phosphorus suggests hungry bone syndrome.

With the recent increase in day-care thyroid surgeries, prediction of postoperative hypocalcemia is important to facilitate early discharge. Discharging patients on calcium supplementation has been endorsed by some surgeons as a means to reduce symptomatic hypocalcemia, while others have advocated sending patients home with prescriptions for calcium supplementation to be taken in case symptoms of hypocalcemia develop. However, both these approaches have been contested. Several studies have been carried out to determine factors that predict postoperative hypocalcemia in patients undergoing TT to enable more selective postoperative surveillance and management as per the patient’s risk in a bid to avoid unnecessary risk of iatrogenic hypercalcemia and to reduce the burden of inpatient stay.

Monitoring of serum calcium postsurgery may seem a more cost-effective option. However, hypocalcemia usually manifests 1 to 2 days after surgery. Hence, this approach may miss many patients with hypocalcemia if the patients are getting discharged on the first or second day of surgery. It is a common practice in a few centers to do daily calcium testing postsurgery until a rising trend in calcium values is observed. A drop in serum calcium levels on postoperative day 1 of more than 1.1 mg/dL as compared with the immediate preoperative levels was shown to have good sensitivity in detecting subsequent hypocalcemia.40 In another study, the slope of change between total calcium between 8th and 14th postoperative hour in hypocalcemic patients was found to be significantly steeper than normocalcemics, and hence a trend of fall in calcium in consecutive samples was suggestive of predicting further hypocalcemia.41

Vitamin D status may be evaluated preoperatively. If serum 25-OHD level is less, adequate replacement with cholecalciferol (60,000 IU once weekly for 4–8 weeks) should be considered.42 In patients with unknown vitamin D status, empirical vitamin D replacement may still be considered. Although this may hopefully decrease the rates of postoperative hypocalcemia, this has not been documented in clinical trials.42 Care should be taken not to worsen hypercalcemia in undiagnosed patients with primary or tertiary hyperparathyroidism.

During the surgery, if a parathyroid gland is accidentally excised or devascularized, the standard of care is to autotransplant the gland in situ. However, successful revascularization of the autotransplanted gland can take up to 8 weeks, with many patients developing transient hypocalcemia during this period.

The management of hypocalcemia should be guided by clinical features and biochemical severity of hypocalcemia. Hypocalcemia acts as a stimulus for PTH secretion and hastens parathyroid function recovery. Thus, in patients planned for longer hospital stay and mild hypocalcemia, treatment can be withheld and the patient is observed for clinical or biochemical worsening.

Intravenous (IV) 10% calcium gluconate is the preferred route of calcium administration in cases of severe hypocalcemia with symptoms. Calcium gluconate is preferred over calcium chloride for IV use since the former is associated with less irritation and less tissue necrosis in the event of extravasation into the subcutaneous space. Calcium gluconate is given as an infusion in 5% dextrose or normal saline, the former being preferred as sodium-containing fluids can increase the osmotic load, thereby increasing the calcium excretion by the kidney. In case of tetany, 10 mL of 10% calcium gluconate can be administered over 10 minutes followed by continuous infusion. Patients should also be concomitantly initiated on oral calcium and vitamin D analogs. In patients with mild to moderate hypocalcemia, oral calcium and/or vitamin D analogs may be the initial therapy. All patients with hypocalcemia should be evaluated with serum magnesium and those with serum magnesium <1.6 mg/dL should be supplemented with magnesium.

The supplementation of oral calcium alone is not effective, most often in patients with moderate to severe hypoparathyroidism. In patients with hypoparathyroidism, insufficiency of PTH leads to decreased formation of the active 1,25(OH)2 vitamin D (calcitriol), which mediates the effect of PTH on intestinal calcium reabsorption. Hence, it is beneficial to administer calcitriol or other 1-alpha hydroxylated vitamin D analogs to patients with hypoparathyroidism. The calcemic action of calcitriol can last more than 24 hours after a single dose of the drug. The typical initial dose of calcitriol is 0.25 to 0.5 μg twice daily. Alfacalcidol (1alpha-hydroxyvitamin D) can also be used at doses twice that of calcitriol, but the time to offset of action is longer. The increase in the serum calcium typically follows 1 to 3 days after treatment. If not adequately replaced preoperatively, 60,000 IU of oral cholecalciferol should be given for 8 weeks followed by a maintenance dose (1000–2000 U/day or 60,000 IU once a month).

In the long run, treatment by synthetic (1-84) PTH confers the added advantage of preventing hypercalciuria and subsequent renal calculi and allows for decreasing the dosage of calcium and calcitriol supplementation. Although approved by the Food and Drug Administration, its use is limited due to high cost and limited availability.1-34 A PTH administered in twice-daily doses is a suggested alternative with satisfactory results. Prophylactic use of teriparatide has also been reported in TT patients at risk for hypoparathyroidism. In the recent THYPOS trial, in patients with 4-hour postoperative iPTH <10 pg/mL, use of teriparatide 20 μg twice a day till discharge reduced the incidence of hypocalcemia and the need for calcium supplementation after 1 month.48 Recently, teriparatide infusion was found to provide less fluctuation in serum calcium levels and better efficacy in reduction of hypercalciuria (Flow Chart 1).49

Depicting monitoring and treatment of a postoperative patient after total thyroidectomy 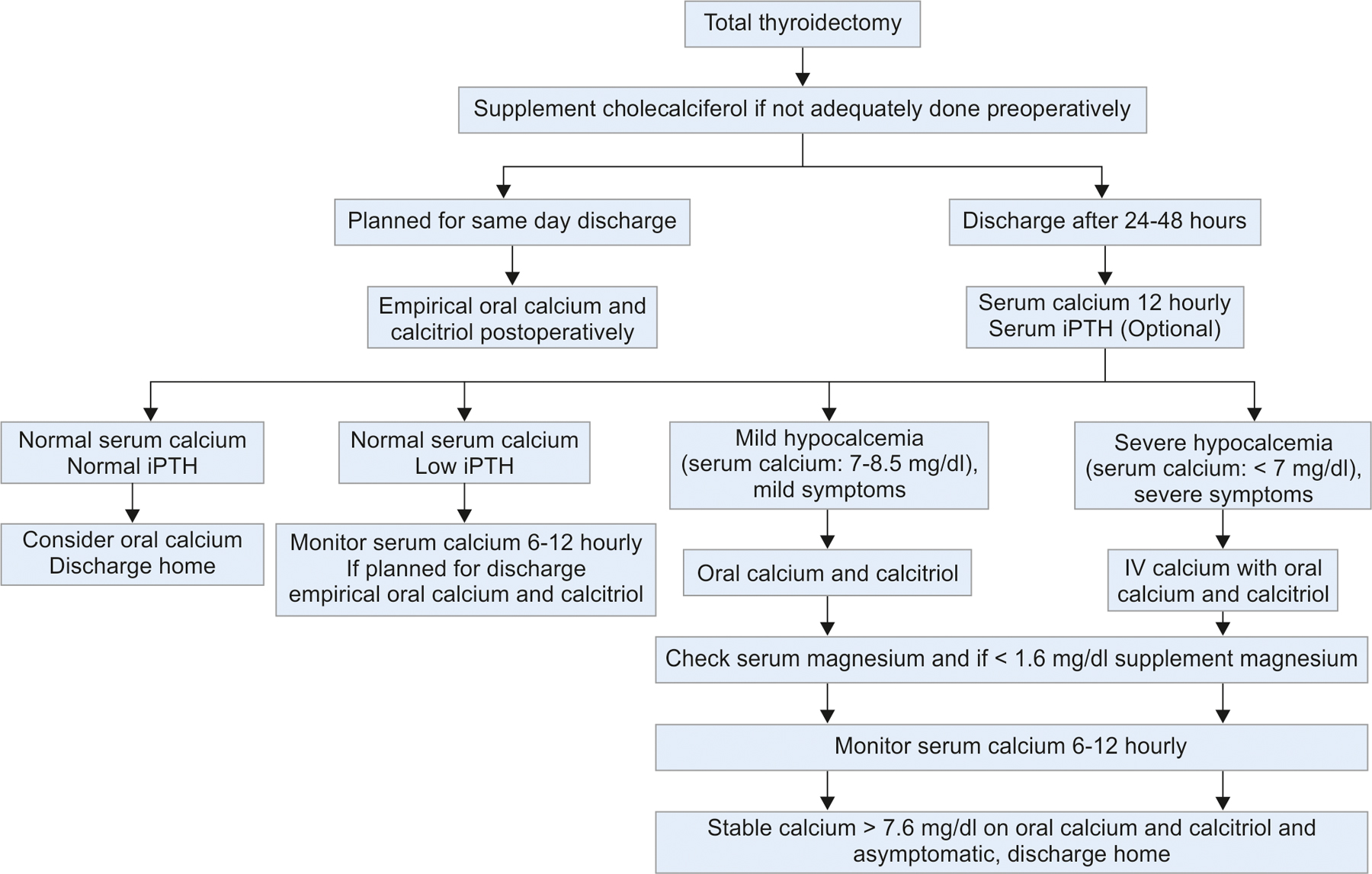