Thyroid neoplasms are classified into three major categories: Epithelial, nonepithelial, and secondary. Most primary epithelial tumors of the thyroid are derived from follicular cells and include follicular, papillary, poorly differentiated, and anaplastic carcinomas.1

Neuroendocrine tumors originate from mostly neural crest-derived cells. The types of these cells differ according to the organ in the body. They are mostly seen in midline organs, such as the esophagus, stomach, pancreas, intestine, and lung.2 The NETs have similar features with characteristic immunohistochemical and serum markers, but the biology of the tumor may differ according to tumor type.3 Parafollicular C cells are one of the neural crest cells migrating from neural crest to thyroid gland, located in basal cells of thyroid follicle.4

The MTC occurs sporadically in approximately 75% of identified cases, with the remainder being one of three familial autosomal dominant syndromes: Multiple endocrine neoplasia (MEN) 2A, MEN 2B, and familial MTC.5 The MTCs are unique because of their expression of calcitonin.1 Calcitonin is a 32-amino-acid linear polypeptide that functions in the regulation of normal calcium homeostasis. It is utilized as a tumor marker for MTC, as it is constitutively secreted from C cells, with elevated levels being sensitive and specific for both diagnoses and follow-up for recurrence.6,7

In this case report, a rare thyroid tumor is presented that has neuroendocrine staining properties and does not produce serum or cytoplasmic calcitonin. It is important to perceive the differences between calcitonin-negative MTC and calcitonin-negative NET, because the treatment and prognosis may differ.

The patient was a 45-year-old woman. She got admitted in our clinic because she noticed a mass in her neck. She did not have hoarseness, dysphagia, weight loss, flushing, or diarrhea. She has no history of radiation exposure and family history of endocrine disorders. Her examination revealed a slightly palpable nodule at the right lobe of thyroid. There was no palpable cervical lymphadenopathy.

Tumor located at thyroid, with no distinct capsule, and is relatively well demarcated (hematoxylin—eosin 40×) 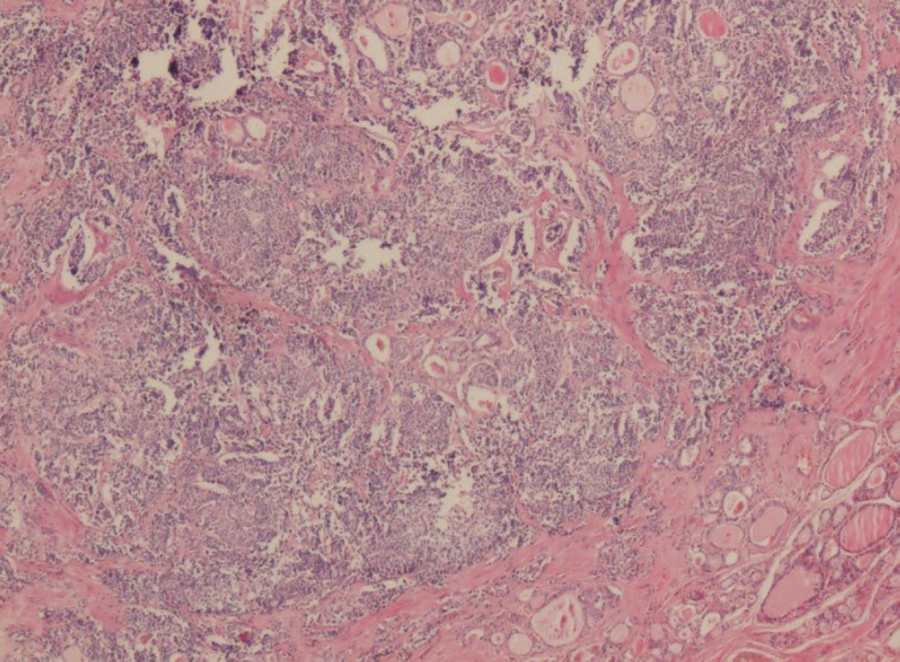 Tumor cells are uniform, with round- or ovoid-shaped nuclei and there is no mitosis or nuclear pleomorphism (hematoxylin— eosin 200×) 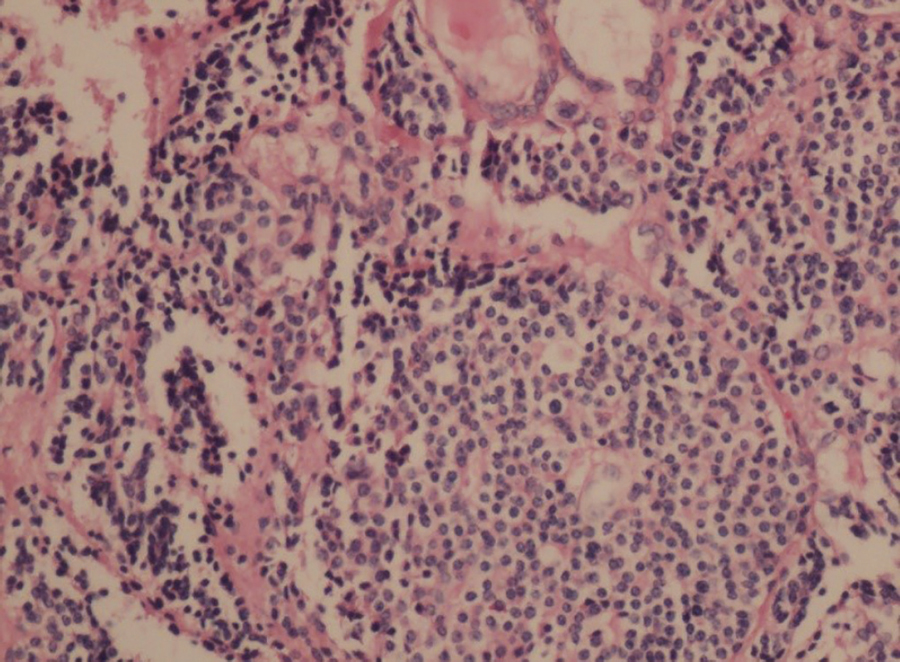 Thyroid ultrasound (US) revealed countless multiple nodules with heterogeneity, and some of these nodules had calcification. The size of the right thyroid lobe was 5 × 6 × 4 cm and that of the left lobe was 6 × 7 × 5 cm. The maximum-sized nodule had a diameter of 0.9 cm at right thyroid lobe and has suspicious US features like hypoechogenicity and microcalcifications. Fine needle aspiration biopsy of this nodule has resulted in being nondiagnostic. The patient's serum levels of calcium, thyroid-stimulating hormone, and free thyroxine were within normal ranges.

Due to the countless number of multiple nodules, suspicion about the nodule at the right lobe, and the unwillingness of the patient for follow-up, she underwent total thyroidectomy in March 2014. During the operation, there was no remarkable lymphadenopathy or suspicious lymph node. On histopathological examination, there was a tumor in the left thyroid lobe, which measured 0.4 cm. This nodule did not have any suspicious features like hypoechogenicity, irregular margins, microcalcifications, or taller-than-wider shape at the preoperative US. The tumor has protected follicle sites, no distinct capsule, and is relatively nodular (Fig. 1). Hematoxylin and eosin stains demonstrated that fairly uniform cells had transparent cytoplasm, which had no distinct borders, but had vesicular nuclei. The shape of the nucleus is rounded or ovoid. There is no nuclear pleomorphism, mitosis, or necrosis (Fig. 2). 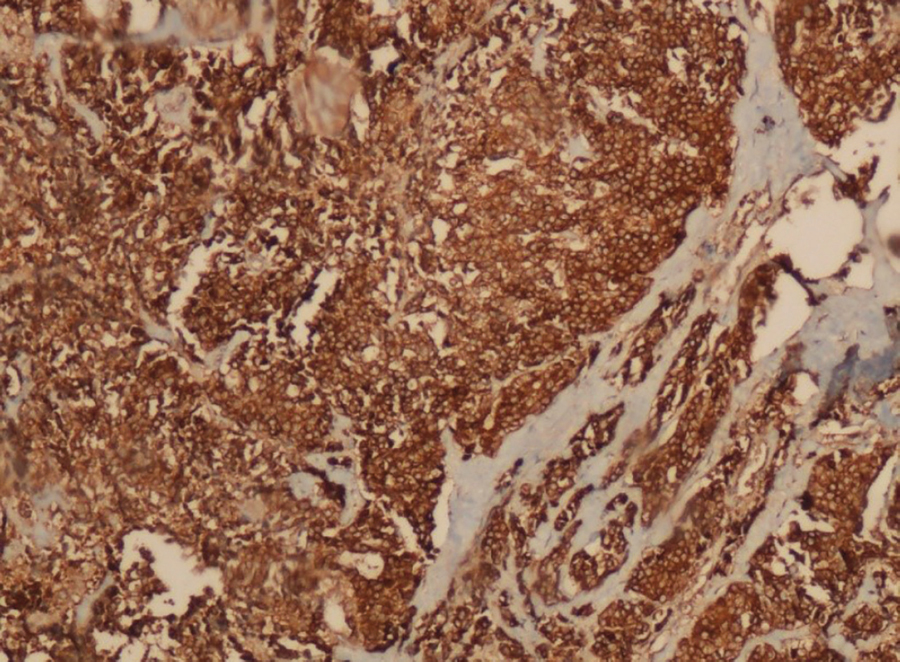 Serum calcitonin and Tg levels have been identified as normal after histopathological examination at the early postoperative period. During the follow-up, there was no elevation of calcitonin or Tg levels. In the first year after the surgery, the patient had thyroid US, neck, thoracic, and abdominal tomography and gastroscopy. There was no clinical evidence of tumor recurrence or any sign of another tumor/metastasis. 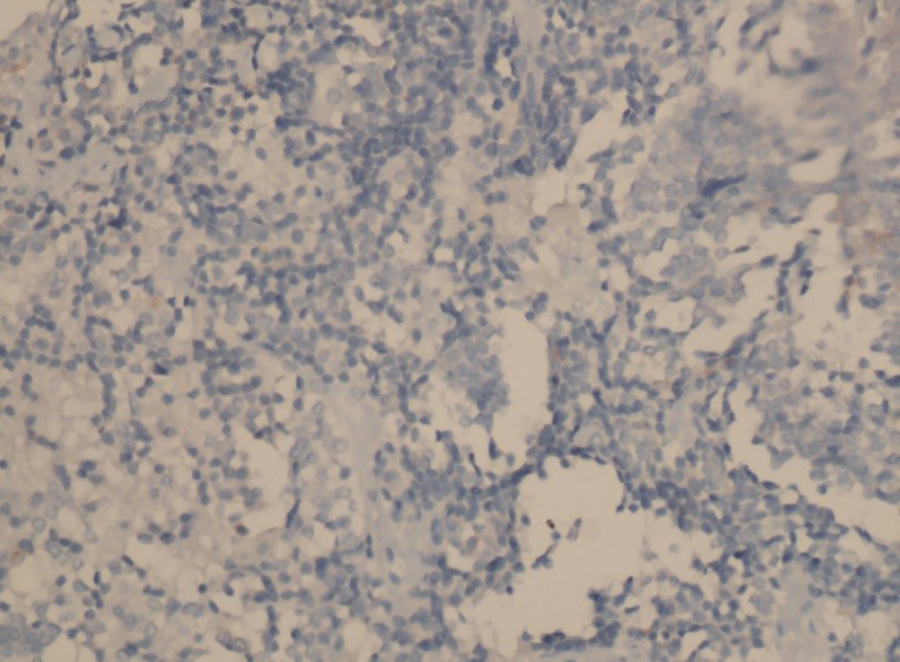 The MTC is an exact NET of the thyroid.11 It originates from the parafollicular C cells in the thyroid. Amyloid can be seen in up to 80% of medullary cancers; therefore, Congo red staining and polarized light microscopy are used to diagnose these tumors. The “gold standard” for the diagnosis of medullary carcinoma is the immunostain for calcitonin. Calcitonin-negative medullary cancers have been reported; however, these calcitonin-free tumors, which are more frequent in familial settings with coexistent C-cell hyperplasia, are regarded as the least differentiated example of tumors with C-cell histogenesis having lost the capacity to secrete calcitonin and whose behavior is very aggressive clinically.8

Follicular markers of cells like Tg or TTF-1 are negative for MTC. In this case, in the immunohistochemical staining, tumor has been calcitonin negative and TTF-1 and Tg positive. Due to the follicular markers, positivity reminds one that this tumor has originated from follicular cells.

Schmid and Ensinger12 reported four cases as atypical MTCs from 142 patients with MTC. Three cases had very few calcitonin-positive tumor cells, while the fourth case completely lacked calcitonin immunoreactivity. The four cases are immunochemically positive for synaptophysin and chromogranin A, but are negative for Tg and CEA. In one patient, there was lymph node metastasis during follow-up. Atypical MTC can be separated from calcitonin-negative NET by the negativity of Tg and CEA. The CEA negativity is also remarkable for atypical MTCs because all typical MTC patients are positive for CEA. Recently, Nakazawa et al used the term “C-cell-derived calcitonin-free neuroendocrine carcinoma of thyroid.” The diagnosis of atypical MTCs was made immunohistochemically with calcitonin gene-related peptide positivity.13 Our case also has some histological similarities to some of the neoplasms described by Schmid and Ensinger12 as an atypical MTC; however, the complete positivity for Tg and TTF-1 immunoreactivity in our case precludes this diagnosis.

Thyroid paraganglioma is usually positive for neuroendocrine markers, such as chromogranin A, synaptophysin, and neuron-specific enolase, but is negative for cytokeratins, CAM 5.2, parathyroid hormone, calcitonin, CEA, Tg, and TTF-1.14

Paraganglioma-like medullary carcinoma, a rare subtype of MTC, is also in the differential diagnosis. It is characterized as an encapsulated tumor with a trabecular and insular growth pattern. The tumor cells are polygonal, with distinct cell borders; fine, granular eosinophilic cytoplasm; and round-to-oval nuclei, separated by capillary-rich stroma. Mitotic activity is absent. Paraganglioma-like MTCs show strong immunoreactivity for cytokeratins, calcitonin, chromogranin, synaptophysin, and CEA, but are negative for both Tg and TTF-1.15

The “primary oat cell carcinoma” of the thyroid reported by Eusebi et al is another intriguing illness that can enter the differential diagnosis. The reported tumors were positive for chromogranin A and synaptophysin, but negative for Tg. Calcitonin was not detected by immunohistochemistry, nor by the calcitonin messenger ribonucleic acid by in situ hybridization. Based on these results, Eusebi et al16 concluded that such cases should be separated from the MTC and be classified as primary oat cell or small cell carcinoma of the thyroid. In our case, the strong immunoreactivity with Tg associated with CEA strongly argued against this diagnosis.

The NETs of the thyroid are rare tumors. They are neoplasms that originate from cells within the endocrine and nervous systems. Although the majority of NETs are benign, some can be malignant. The NETs typically occur in the intestine where they are defined as carcinoid tumors, but they can also occur in the esophagus, stomach, pancreas, and lung.18 Less common sites of NET include the pituitary, adrenal, cervix, skin, and thyroid.19,20

In this case, the tumor has protected follicle sites, with no distinct capsule, and is relatively nodular. Hematoxylin and eosin stains demonstrated that fairly uniform cells had transparent cytoplasms, which had no distinct borders, and they had vesicular nuclei also. Nucleus shapes are round or ovoid. There is no nuclear pleomorphism, mitosis, or necrosis. These features are consistent with those of an NET.

There are few cases of calcitonin-negative NETs. The first case of a calcitonin-negative nonmedullary NET of the thyroid was reported by Chernyavsky et al.2 In that case report, synaptophysin and chromogranin A were positive for neuroendocrine markers, and Tg was positive as follicular markers. On histopathologic examination, the tumor has not had mitotic activity, vascular invasion, or necrosis. They described the tumor as a well-differentiated NET of the thyroid. Postoperatively, the patient has not received any adjuvant treatment. Follow-up serum calcitonin and Tg had remained undetected. At the first year after surgery, there was no evidence of tumor recurrence. Chernyavsky et al2 indicated that distinction between MTC and calcitonin-negative NET is important and difficult, because the treatment and prognosis may vary. They think that the diagnosis of NET should be suspected when the cells lack immunoreactivity of calcitonin and are positive for Tg. The presented case had no mitotic activity, vascular invasion, or necrosis, similar to this case, and could also be described as well-differentiated NET of thyroid. There was no clinical evidence of recurrence in the presented case after 1-year follow-up either.

Mussazhanova et al21 reported the case of a calcitonin-negative NET where the tumor cells invaded several vessels and had metastasized to regional lymph nodes, which occurred in the thyroid of a patient previously having been irradiated at a high dose (60 Gy) for pharyngeal cancer. Immunohistochemically, the tumor cells were strongly positive for neuroendocrine markers and Tg, a marker of thyroid follicular cells, but negative for calcitonin and CEA. Expression of Tg and thyrotropin receptor was confirmed by quantitative real-time polymerase chain reaction. The tumor has been diagnosed as calcitonin-negative SCNEC. This case shows that calcitonin-negative NETs may be aggressive.

In a more recent study, Kim et al1 reported a case of calcitonin-negative NET in 2015. In that case, the patient had undergone a right lobectomy, the tumor had immunopositivity with synaptophysin, chromogranin A, Tg, and TTF-1, and has no immunoreaction with calcitonin, like the presented case. There was no clinical evidence of recurrence after 1-year follow-up. They assumed that positivity for TTF-1 and Tg indicates that the tumor has originated from follicular cells of the thyroid. They mentioned that it is important for the physician to be aware and suspicious of nonmedullary NETs when the cells are negative for calcitonin, but positive for Tg.

As in the previous three reports, we conclude that the present tumor was an NET of the thyroid, which was calcitonin-negative on immunohistochemistry and positive for markers of follicular thyroid cells and thus, argue for an NET arising from the diffuse neuroendocrine system of thyroid follicular cell origin rather than from true parafollicular cells.

To the best of our knowledge, this is the fourth calcitonin-negative NET of the thyroidthat has been reported in the literature. The distinction between atypical MTC and calcitonin-negative NETs of the thyroid is needed because these tumors may have different biologic behaviors and calcitonin negativity makes follow-up of the patient challenging. Furthermore, large case series and further studies could help to understand the pathophysiology and clinical course of these tumors.