Angiomyolipoma is a benign mesenchymal tumor consisting of varying amounts of mature adipose tissue, smooth muscle, and thick-walled blood vessels.1 It arises from perivascular epithelioid cells and is commonly seen in the kidney. The extrarenal sites reported include the bone, colon, heart, lung, parotid gland, skin, spermatic cord, gynecologic organs, and retroperitoneum, with the most common extrarenal site being the liver.2 Only four cases of angiomyolipoma of the adrenals have been reported in the world literature.1-3

A 45-year-old female presented with off and on epigastric pain with repeated episode of nonbilious vomiting. There was no history of fever, jaundice, or weight loss. Ultrasound abdomen revealed a well-defined 16 × 14 cm mass in the right retroperitoneum. The CECT abdomen defined the mass as of right adrenal origin pushing the duodenum anteriorly with inferior vena cava anteromedially. The diagnosis was made as possibility of angiomyolipoma (Fig. 1). Laboratory investigations, serum catecholamine, cortisol, and urinary vanillylmandelic acid were within normal limits. Exploratory laparotomy by right transverse incision revealed a 16×14×10 cm mass, firm in consistency, quite separate from the right kidney with no definable right adrenal gland. The whole mass was removed without rupture (Figs 2 and 3). Histopathological examination revealed mature fat cells, smooth muscle fibers, and thin-walled blood vessels with peripherally compressed adrenal cortical tissue suggestive of angiomyolipoma of adrenal. Patient had an uneventful recovery and was normal at follow-up. 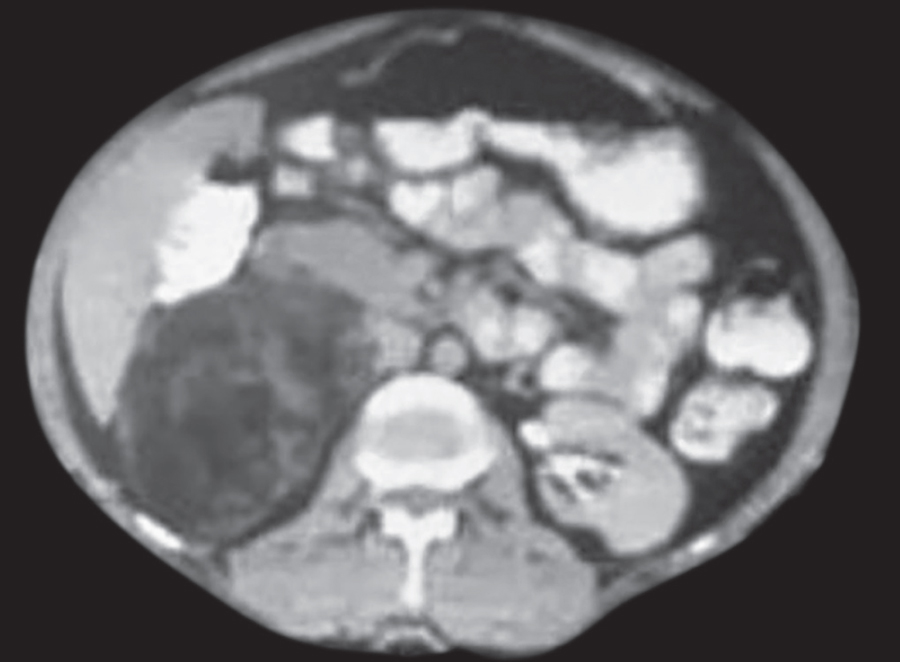 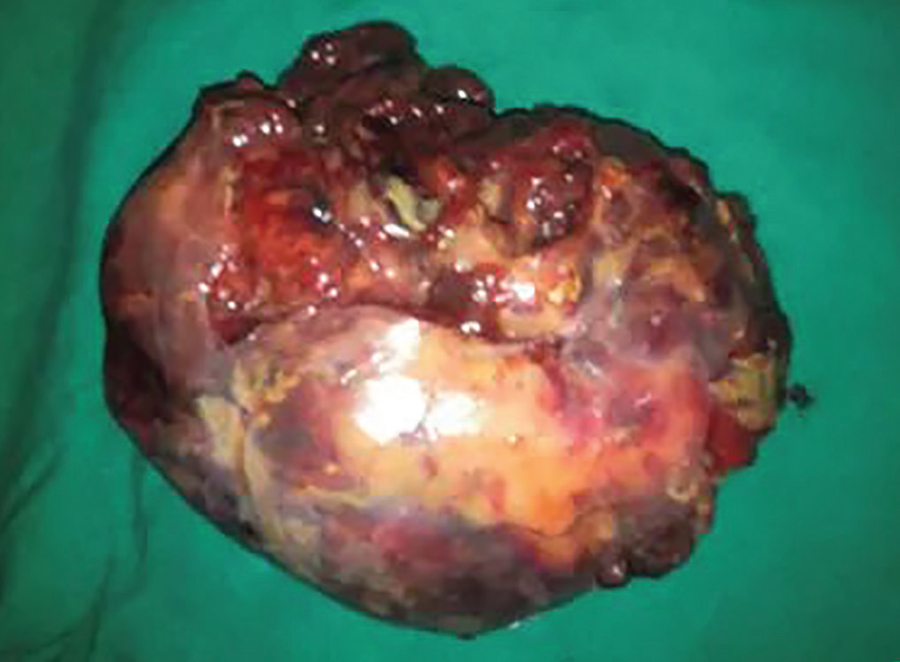 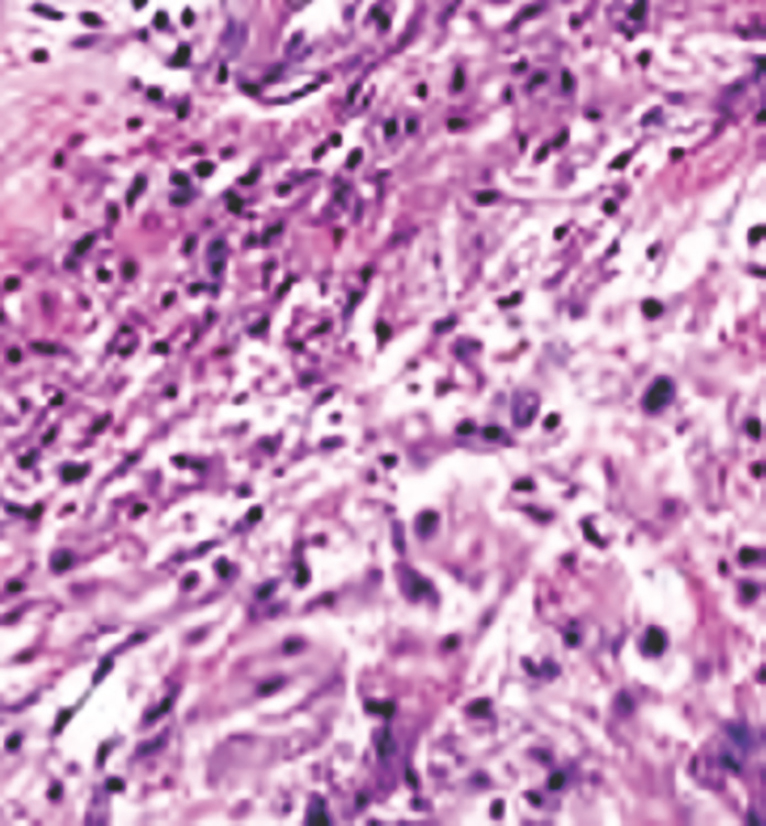 Angiomyolipomas are very rare lesions, often arising in the kidney and are a part of a group of tumors with a diverse appearance known as PEComas (tumors of perivascular epithelioid cell origin). Angiomyolipoma most commonly occurs in the kidney. The next common site is the liver. Extrarenal angiomyolipomas are extremely rare and have been reported in the liver, colon, suprasellar region, small intestine, skin, intranodal, omentum, breast, and adrenal. About half of the angiomyolipomas are associated with tuberous sclerosis and in these cases, they are usually multiple and bilateral.4 It has been estimated that approximately 80% of the severe and complete forms of tuberous sclerosis have angiomyolipoma.5,6 On CT scan, the presence of even a small amount of fat suggests the diagnosis of angiomyolipoma. On magnetic resonance imaging, the typical features of the fatty component include bright signal intensity on nonfat suppressed images, with dropout of signal on fat-suppressed images.1 Grossly, angiomyolipomas appear well-circumscribed and depending on the relative amount of adipose tissue, they range from a glistening yellow (“fatty”) appearance to a more white-tan and firm appearance depending on the relative amount of adipose tissue.2 Histology typically shows a variable mixture of mature adipocytes, thick-walled blood vessels, and spindled and epithelioid stromal cells often radiating out from blood vessel walls. Management should be the same as that for any adrenal mass. Assessment of functional status of the tumor should be done, although all the five adrenal angiomyolipomas reported so far were nonfunctional. Surgery is indicated if the patient is symptomatic or the tumor is more than 6 cm since the risk of malignancy increases with size.7 Also, the risk of spontaneous rupture increases with size, owing to the presence of abundant and abnormal elastin and poor vascularity in the tumor.4 Laparoscopic adrenalectomy is an option and had been successfully done for a 6 cm adrenal angiomyolipoma.8

Angiomyolipoma of adrenal is extremely rare, with only four cases reported in literature. It usually presents as incidentaloma. We report the case of a 45-year-old female patient presenting with pain abdomen, nausea, and repeated episodes of vomiting. Ultrasonography abdomen showed features of retroperitoneal tumor. The CECT abdomen revealed heterogeneous nonenhancing hypodense fatty lesion in right adrenal gland. Biochemical investigations were negative for functioning adrenal tumor. Right adrenalectomy was done with good outcome. Diagnosis was confirmed by histopathology. The unusual association of adrenal angiomyolipoma with gastric outlet obstruction has not been reported till date.