A 64-year-old Indonesian man with background history of hypertension, diabetes mellitus type II, obesity, and obstructive sleep apnea was referred to our endocrine surgery unit for further evaluation and management of right adrenal mass. He initially went for health screening at another private center. A CT scan of abdomen revealed a huge right adrenal mass with features suggestive of malignancy (Fig. 1). Otherwise, there was no complaint of abdominal pain or discomfort. He also had no constitutional symptoms. He suffered from hypertension since more than 10 years and was currently on two types of antihypertensive medications. His blood pressure was well controlled. During physical examination, patient had no Cushingoid features except for his high BMI of 38. His blood pressure was 140/90 mm Hg. Blood glucose control was in normal range. Abdomen was flabby, no organomegaly, and no mass can be appreciated. Examinations of other systems revealed normal finding. 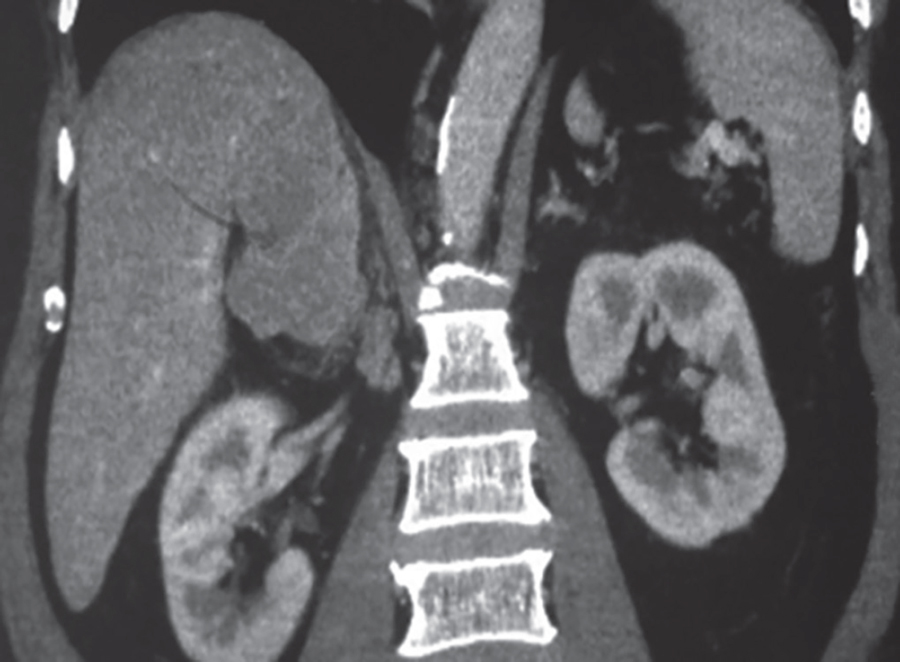 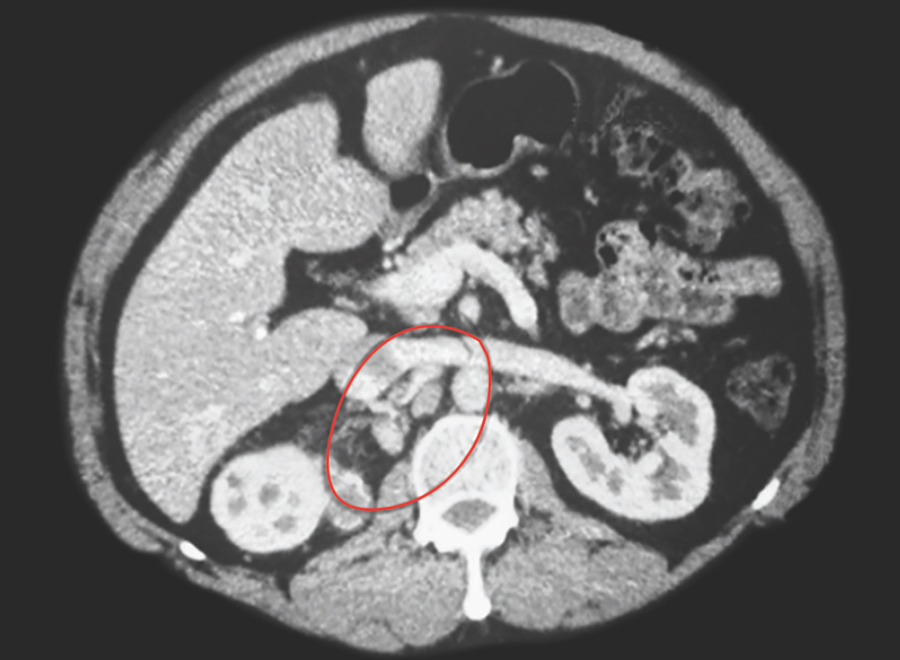 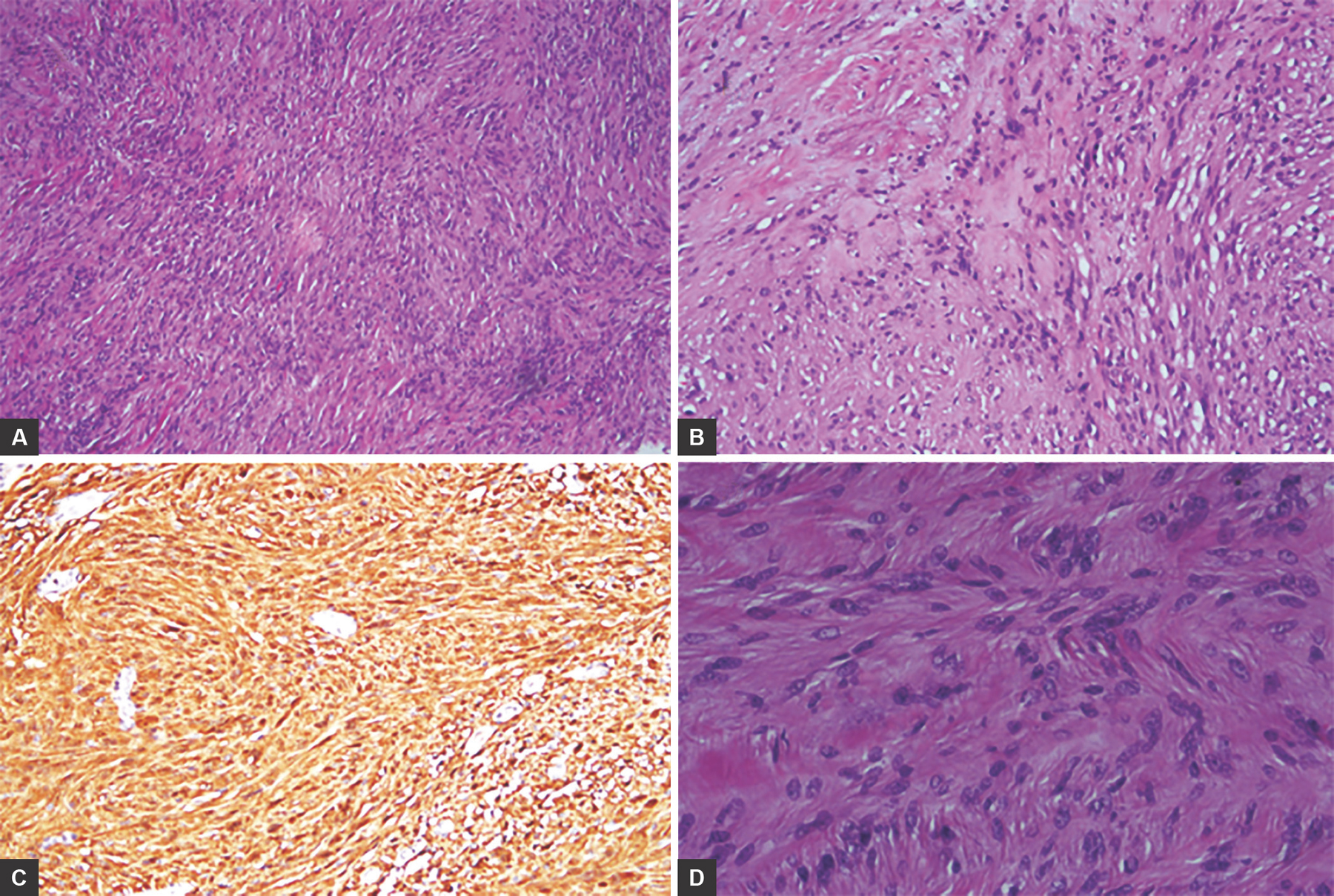 Schwannoma is a tumor arising from the myelin sheath, which was first described by Verocay in 1908 and was later further sub-classified by Antoni in 1920 into two distinct histological patterns.3,6 It is commonly seen to arise from the peripheral nerves and cranial nerves at the head and neck region. It rarely involves the visceral organ in the case presented, where it arises from the adrenal medulla. Adrenal schwannoma comprises 1 to 3% of all schwannomas.1-3 Other areas where they can be found include retroperitoneum and juxta-adrenal area.1,3 Adrenal schwannoma is thought to arise from Schwann cells from the phrenic nerve, the vagus nerve, or sympathetic trunk that innervate the adrenal medulla.6 The explanation for this is related to the embryological development of the adrenal medulla where it is formed by cell migration from the neural crest. Physiologically, if functions as postganglionic neurons. Over the last few years, the number of adrenal schwannomas reported has been increasing, including a large series of 33 cases reported by Mohiuddin and Gilliland.1 This could be related to more vigorous use of imaging modalities, such as MRI, CT scan, and PET scan. There is no gender dominance and can occur at any age group.3,5,7 Majority of adrenal schwannoma is solitary and benign. Malignant transformation may be found in association with von Recklinghausen disease or neurofibromatosis.3,7

Most patients with adrenal schwannomas are asymptomatic as in the case presented. They are also biochemically normal. The possible nonspecific symptoms will be like other adrenal lesions, which is normally abdominal or flank pain or discomfort.1,5,7 In the review by Mohiuddin and Gilliland,1 13 out of 30 patients presented with symptoms of flank or abdominal discomfort. Others report finding of adrenal schwannoma during investigation for gross hematuria.8 The biochemical tests are normal in most cases including serum electrolytes, urinary and serum catecholamines as in the case presented. Patients with retroperitoneal schwannoma secreting noradrenaline have been reported.2,7

Adrenal schwannoma on CT image typically appears as a homogeneous, round, and well-circumscribed lesion. Occasionally, it undergoes degenerative changes, such as calcification, hemorrhage, or cystic formation, giving rise to heterogeneous enhancement.3 In the case presented, the CT scan showed a huge mass with heterogeneous enhancement, irregular border with possible infiltration to the liver bed, and inferior vena cava, suspicious of adrenal cortical carcinoma. Another imaging test that might be useful in the diagnosis of adrenal schwannoma is 18F-fluorodeoxyglucose Positron emission tomography CT. The test is able to differentiate between benign and malignant adrenal lesion with sensitivity of 93 to 100% and specificity of 80 to 100%.9,10

The confirmatory diagnosis of adrenal schwannoma is by histological and immunohistochemistry evaluation. Fine needle aspiration cytology for adrenal mass is controversial unless in suspected metastasis.11 Histopathological examination of adrenal schwannoma might show both the cellular and the conventional type.1,5 A growth pattern is lack of Verocay bodies with increased mitotic activity.5,12 This appearance might be confused with diagnosis of leiomyoma, ganglioneuroma, or adrenal pheochromocytoma. A conventional type normally shows the characteristic appearance of spindle cells alternating with compact hypocellular (Antoni A) areas and Verocay bodies. In the case presented, microscopic examinations showed evidence of conventional schwannoma with positive immunohistochemistry for S-100 and negative for SMA, desmin, and CD34 which are typical for schwannoma.1,5,12

Surgical management of adrenal schwannoma follows the adrenal incidentaloma as most of them are asymptomatic and found incidentally. The important features include tumor size, imaging characteristics, and growth rate. Simple rule is to excise all lesions bigger than 6 cm with close observation for 4 to 6 cm. Any lesion that grows more than 1 cm over 6 to 12 months is also recommended to be removed.13 Our patient's adrenal mass measured 8 cm with suspicious appearances on CT imaging and warranted surgical excision.

Laparoscopic adrenalectomy is the gold standard for small, benign lesions in the adrenal. The role in the large lesion or suspicious of malignancy is controversial, especially the risk of incomplete resection, local recurrence, and port-site metastases. Large tumor size alone should not be the limiting factor but the presence of local invasion and poor tissue plane on imaging should be taken into consideration for laparoscopic adrenalectomy.14,15 In the case presented, an open adrenalectomy was considered in view of large lesion and suspicious features on CT imaging.

Preoperative diagnosis of adrenal schwannoma is difficult due to lack of definitive features on imaging. Definitive diagnosis only established postoperatively by histological and immunohistochemical staining. As majority of them presented as an incidentaloma, the management follows the adrenal incidentaloma.